The False Impasse Over Aid to Israel 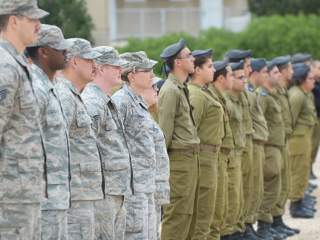 With most stalemated international negotiations, the reasons for both the impasse and the continuation of talks are easy to understand. A range of possible agreed outcomes exists, with some more favorable to one party and some more favorable to the other, and with each side naturally trying to get as good a deal as it can. For each party, there is at least some possible agreement that would be better than no agreement at all. The parties keep bargaining because each would lose something if they failed to reach an agreement. If that were not the case, then one or the other of the parties would have no reason to bargain in the first place and there would be no negotiation at all.

It is not as if the absence of an agreement about an aid package would entail some consequence in the Middle East detrimental to U.S. interests as well as Israeli interests, such as giving rise to a destabilizing military threat by some other state in the region against Israel. This is not the case first of all because of Israel's overwhelming military superiority in the region, which still would be overwhelming even without any further U.S.-funded enhancements. It also is not the case because even if enhancements were required to maintain the superiority, Israel—which is among the richest 15 percent of countries in the world as measured by GDP per capita—is quite capable of paying for them itself.

Or one can look at equivalence in terms of the spending end rather than the revenue end. The gifted funds involve that much less money available for programs benefiting Americans and that much more money for the Israeli government to spend on whatever it wants to spend it on. Shekels, like dollars, being fungible, what the money gets spent on need not have anything to do with the defense or security of Israel. The money that is no longer available for repair of America's crumbling roads and bridges, for example, can get spent by Israel on other roads and bridges—including the roads in the West Bank that are used only by Israelis and especially settlers and that the Palestinians who live in the West Bank are prohibited from using, or even crossing except on foot.

Of course, we all know what goes through the minds of American politicians when they are dealing with a subject involving Israel and why this question of the aid package is being treated as if it really were like other international negotiations in which each side has something to lose. The feared loss is the domestic political consequence of being targeted as someone whose love for Israel is less fervent than that of a political opponent and of being outspent by, and losing to, that opponent in the next election. In the case of President Obama, the New York Times article on this subject describes his objective as being “to burnish his legacy” with “the largest package of military aid ever provided by the United States to another nation” and to “cement his claim to have done more than any other president to support Israel's security.” Let us at least be honest about the objectives if those objectives involve individual politicians' re-election prospects or the legacies of politicians not running for re-election. Such objectives are quite different from the interests of the United States or of American taxpayers. They are even different from the security and well-being of Israel.

A larger aid package for Israel certainly is not in order as “compensation” for concluding the multilateral agreement that limits Iran's nuclear program. An agreement that has curtailed that program and moved Iran farther away from any prospect of having a nuclear weapon is, as many former senior Israeli national security officials have recognized, an improvement in, rather than a detriment to, the security of Israel. The Netanyahu government's actual reasons for not wanting anyone to have any dealings with Iran are not reasons to be encouraged, from the standpoint of either Israeli or U.S. interests. Any “compensation” would only be in the North Korean sense of a regime engaging in troublesome behavior (which in the Netanyahu government's case has involved its blatant interference in the U.S. political process to try to kill the Iran agreement) and then expecting a payoff in return for not engaging, for a while, in more such behavior.

The only possible justification for increased largesse to Israel at this point would be as preparation for a serious effort in the remaining months of the Obama administration to get the Israeli government to reach a peace agreement with the Palestinians involving a genuine two-state solution. To be seen bending over even farther backwards than before as a supporter of Israel could be a necessary part of any such effort, given political realities in both Israel and the United States. But whether the Obama administration will make such an effort remains to be seen.

In the meantime, those members of the U.S. Senate who signed a letter urging the administration to conclude quickly a memorandum of understanding with Israel about a new aid package ought to be explaining to their taxpaying constituents what such aid really means in fiscal terms as described above.

The administration itself might take some advice from Donald Trump—even though Trump himself might not always apply his own advice to dealings with Israel—in a speech on foreign policy that, while studded with inconsistencies and falsehoods, included a pointer from this self-proclaimed expert on deal-making. “In negotiation you must be willing to walk,” said Trump. “When the other side knows you’re not going to walk, it becomes absolutely impossible to win.” Walking away from a negotiation can entail substantial risk, in the form of losing benefits that can only be gained from an agreement. Such risks are much more common in international relations than in the business dealings Trump is familiar with, in which there is always some other property owner, or some other hotel or golf course, to which one can turn for an alternative deal. But as far as U.S. gift-giving to Israel is concerned, there is no risk at all to U.S. interests from walking.

The situation at hand is the equivalent of a nephew complaining about the amount of birthday gift money he got from an uncle and wanting uncle to agree to give more. Negotiation is not the appropriate response for uncle. Either walking or saying “take it or leave it” would be more appropriate, as would a stern reminder to the nephew about who in this relationship is the giver and who is the taker.