The Forgotten Benefits of Offshore Balancing 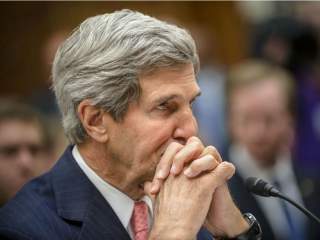 Discussions of grand strategy often are too abstract and general to be of significant practical use in formulating sound decisions about specific foreign policy problems, but sometimes a concept drawn from such discussion points to an overlooked and fundamentally better way to approach such decisions. Such a concept is offshore balancing, which involves the United States not trying to do everything itself but instead exploiting rivalries between other states to prevent any one of them from acquiring hegemonic power and regional dominance. Scholars such as Christopher Layne and Stephen Walt have elaborated on the concept, and in the not-too-distant past the principles involved were applied to some actual U.S. policies with major regional import. During the Iran-Iraq War of the 1980s, for example, the United States was officially neutral. When it appeared that Iraq would have difficulty keeping up the fight, the Reagan administration tilted toward Baghdad—a tilt that, in light of history that would unfold two decades later, made for strange bedfellows. Saddam Hussein's role as the original aggressor, his use of chemical weapons, and humanitarian considerations involving the enormous costs of the war to both sides took a back seat to the idea that the United States would not benefit from either side being a clear winner. It would be better from the standpoint of U.S. interests and the prevention of anyone gaining regional hegemony to have both sides suffer from an exhausting stalemate. The idea was valid, although the same U.S. policymakers later mishandled policy toward the war with what became the Iran-Contra scandal.

Offshore balancing as a principle underlying U.S. policy in the Middle East and especially the Persian Gulf region died in stages during subsequent years. During the presidency of George H.W. Bush, the United States responded to Saddam's swallowing of Kuwait with the influx of U.S. troops that became Operations Desert Shield and Desert Storm. This was not so much a discarding of offshore balancing as a recognition that occasionally even an offshore balancer has to come onshore to do the balancing. This time Saddam had not picked a fight with someone his own size or bigger, but instead with little Kuwait. Undoing the aggression and restoring the previous regional balance without trying to change regimes not to American liking was an appropriate response by the United States. But then came “dual containment” of Iraq and Iran during the Clinton administration, which sounded more like long-term direct U.S. involvement, and less like skillful exploitation of regional rivalries, than offshore balancing implies. Then under George W. Bush any resemblance to offshore balancing was blown out of the water with a large offensive war and a misguided attempt to remake the region politically in the U.S. image.

Listen to American discourse today regarding policy toward this same region and you will hear little that bears any resemblance to principles of offshore balancing. President Obama has articulated some ideas that fit under that concept, and he has attempted to steer U.S. policy on the Middle East back toward a direction that resembles the concept more than in the years immediately before he took office. But his administration is operating in a political milieu that addresses the relevant issues in an entirely different framework. That framework is one in which debates are more likely to be about how many thousands of U.S. troops ought to be dispatched to a war zone rather than about how other people engaging in combat in the same zone could be turned to U.S. advantage. It is a framework in which a multidimensional internal conflict such as the one in Syria is discussed not in terms of how someone we consider to be nasty can be used to block the advance of someone more dangerous to our interests, but rather in terms of how we can fight all the nasties at once. Instead of quietly welcoming the expenditure of blood and treasure by someone like the Iranians as they do heavy lifting in combating someone like ISIS, we consider such an effort on their part to be a negative. Far from treating Saddam's use of chemical weapons the way the Reagan administration did during the Iran-Iraq War in the interest of preserving a local power balance, and rather than welcoming a positive Russian role in disposing of the Syrian regime's chemical weapons, critics of the Obama administration complain that the United States did not go to war with that regime over the issue. And instead of talking about balances of power at all, there is far more talk about creating as much imbalance as possible in favor of certain sides we have preemptively declared to be our friends and against other sides we have automatically labeled as our enemies.

Several factors have contributed to the dominance of this costly and unproductive way of approaching security issues in the Middle East. The passionate attachment to Israel, and along with that an acquiescence by many Americans in the Israeli government's side-taking preferences (including its insistence on forever ostracizing and countering Iran, no matter what the issue or the circumstances) is one such factor. Another is the confused and categorical emotionalism associated with a “war on terror” as a way of thinking of America's encounter with the Middle East. Yet another is the broader Manichean tendency in American perceptions of the outside world, in which the world is seen as divided between the good and the evil, and in which there is no moral room for managing power balances rather than eradicating what is evil.

Forgotten among the prevailing attitudes are the substantial advantages that the United States could enjoy if it today were to practice policies of offshore balancing. They are advantages that Hans Morgenthau, in his classic realist statement about balances of power, attributed to whatever country is able because of geographic separation or other reasons to play the role of balancer, making particular reference to the role that Britain traditionally played in multipolar European politics. One advantage is to conserve one's own blood and treasure while someone else expends his, by utilizing the fears and interests of some other state to check the ambitions and advances of yet another state (or group). Another advantage flows from not being permanently attached to, or estranged from, other countries: the ability to utilize leverage in playing one side of a rivalry off the other, in the process of which one can better advance one's own interests.

The United States has at times skillfully exploited to its advantage other conflicts and rivalries in this way, beyond just the Middle East. The outstanding example in modern times was the triangular diplomacy with the Soviet Union and China that Richard Nixon and Henry Kissinger engineered. Unfortunately policies through several administrations since then toward China and especially toward Russia have squandered the U.S. advantage and driven those two powers closer together than they otherwise might have been.

Meanwhile in the Middle East, similar advantages from offshore balancing could still be realized. But politically it will be hard for any U.S. administration to do so unless prevailing American attitudes about dealing with the region change substantially.