The Growing Danger of War With Iran 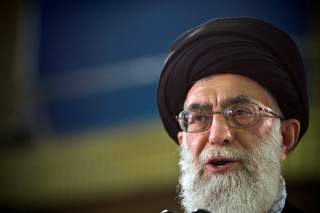 A combination of circumstances has increased the risk that armed conflict will break out between the United States and Iran.  Such a war is no certainty, but the chance that one will occur is greater today than it has been in years.  Some of the relevant circumstances, such as the first two mentioned below, have been around in some form for a substantial amount of time, while others are more recent.

Anti-Iranism in American discourse.  The vocabulary has become so repetitive and widely used that it rolls off tongues automatically: Iran is a “theocratic autocracy” and the “largest state sponsor of terrorism” that engages in “nefarious,” “malign” and “destabilizing” behavior as part of its “drive for regional hegemony,” etc.  The verbiage has become a substitute for thought and for any careful examination of exactly what Iran is and is not doing and how it does and does not affect U.S. interests.  Such a commonly accepted mantra means that anyone making a focused attempt to stir up trouble with Iran starts with a built-in advantage in mustering public and political support.

The lobby pushing hostility against Iran.  There indeed have been, and still are, focused attempts to stir up trouble.  Politically potent interests have their own narrow reasons to keep U.S.-Iranian relations bad and to keep Iran isolated.  Foremost among those interests is the right-wing government of Israel, for which Iran as chief bête noire serves to cripple a competitor for regional influence, to explain all regional trouble in terms that do not relate to Israel, to distract attention from matters (especially the occupation of Palestinian territory) the Israeli government would rather not discuss, and to keep the United States wedded to Israel as supposedly its only reliable regional partner.  Given the obvious impact of the Israeli government’s preferences on American politics, this factor weighs greatly on the current administration’s policies toward Iran.  Donald Trump has tilted heavily to those Israeli preferences, as reflected in his appointments and in his rhetoric since midway through the presidential campaign.  Trump still aspires to achieve an Israeli-Palestinian peace deal, which would require sharp breaks with the Netanyahu government’s current course.  But that might make aggressiveness and confrontation with Iran seem all the more necessary, as a form of compensation to Netanyahu while pressing him for concessions toward the Palestinians.

Anti-Obamaism and the nuclear agreement.  The preceding factor was one of two major reasons for opposition to the Joint Comprehensive Plan of Action, the multilateral agreement that severely restricts Iran’s nuclear program and closes any possible path to a nuclear weapon.  The other major, and very partisan, reason was that the accord was probably Barack Obama’s biggest single achievement in foreign policy.  Trump, who scathingly denounced the accord during the campaign and whose administration only grudgingly acknowledges that Iran is complying with its obligations under the agreement, still shows a strong inclination to do the opposite of whatever Obama did.  Now that the Republican effort to undo Obama’s signature domestic achievement, the Affordable Care Act, has run aground on the realities of health care, the urge may be stronger than ever to undo Obama’s signature foreign policy achievement.  If it can be undone not through direct U.S. renunciation but as a casualty of some other confrontation with Iran, then so much the better from Trump’s point of view.

Weak voices of restraint in the administration.  There are press reports of debate within the Trump administration on aspects of policy toward Iran, and real debate is much better than policy made through wee-hours tweets.  But it is doubtful whether the sober reasons why armed conflict with Iran would be folly are getting adequate attention.  This is not only a matter of the dominance of non-sober voices, such as that of self-declared Leninist destroyer-of-worlds Stephen Bannon, who demonstrated his clout with Trump’s withdrawal from the Paris climate change agreement.  The problem also is that visceral anti-Iranism infects even some of those looked to as adults in the room, most notably Secretary of Defense James Mattis.

Respectability given to regime change.  Another of the adults, Secretary of State Rex Tillerson, recently told the House Foreign Affairs Committee that regime change is part of U.S. policy on Iran.  This comment resurrects a malevolent concept that amply deserves a place on the trash heap of U.S. foreign policy history, especially given the disastrous results under the previous two administrations of regime change in Iraq and Libya.  The concept is no more suitable to Iran, where there is not some political movement in our own image that is just waiting to be freed from the yoke of theocratic autocrats through a new revolution.  Those with other reasons for promoting hostility toward Iran also have been promoting the regime change idea.  The Sheldon Adelson-funded Foundation for Defense of Democracies, for example, shortly after the inauguration was pushing a paper at the National Security Council centered on regime change.  The specific notion usually being pushed is that forms of subversion short of armed conflict would do the job, but the fantasy outcome of a new and attractive regime in Tehran can easily become an objective of military operations initiated, or ostensibly initiated, for other reasons.  Meanwhile, the rhetoric of regime change adds to tension and distrust between Tehran and Washington that make destabilizing incidents increasingly likely.

Mission creep in Syria.  The crushing of the so-called Islamic State’s caliphate is close enough to completion that the difficult and deferred question of what becomes of the Syrian territory that had been part of the caliphate now must be faced directly.  Much commentary on this question in the United States is advocating what amounts to a significant expansion of U.S. objectives in Syria by confronting the Damascus regime and its Russian and Iranian backers.  U.S. actions on the ground and in the air already have moved in this direction.  Incidents have included shooting down Iranian drones and a manned Syrian aircraft, as well as U.S. attacks on what were described as “Iranian-supported” militias.  It is remarkable how much the mission in Syria already has creeped and evolved.  As Josh Wood puts it, “Over the course of his short tenure, Mr. Trump and his administration went from talking about potentially partnering with Damascus and Moscow against [Islamic State], to appearing absolutely disinterested in the civil war, to bombing Syrian government targets.”  The evolution of objectives in the next five months could be just as rapid as in the last five.  Given Iran’s significant role in Syria, and the expanding U.S. role there, Syria is one of the places most likely to spark direct warfare between the United States and Iran.

Displacement from Russia.  Incidents with the Syrian regime’s other major backer, Russia, certainly are worth worrying about along with incidents involving Iran.  But some of the very reasons for special worry about direct armed conflict with Russia—a nuclear-armed ex-superpower—are also reasons to expect special restraint, along lines similar to what the United States and the USSR displayed throughout the Cold War.  Moreover, under the Trump administration Russia does not play the sort of automatic, take-for-granted-as-an-adversary role that Iran plays.  We have yet to fathom the full reasons for Trump’s more qualified and even benign posture toward Russia, but there clearly are such reasons.  If the administration needs to strike at one of the beasts involved in the Syrian war, that beast will be Iran, even though Russian support probably has been at least as important as Iranian support in shoring up the Assad regime.

Delegation to the military.  Trump’s practice of delegating to the Pentagon major decisions, even of a more strategic than tactical nature, involving deployment or use of military forces could in some circumstances be an encouragement of restraint, given the disinclination of experienced military officers to be thrust into new conflicts in which the United States is not already involved.  But the United States is already involved in places such as Syria and the Persian Gulf where confrontation with the Iranians is possible, and with such involvement the military bias is in the direction of doing more rather than doing less.  The bias is toward being more aggressive to accomplish presumed objectives and especially to protect American forces.  At least one U.S. attack so far in Syria has been justified in terms of protection of U.S. forces.  Military decisions taken for military reasons may spark an expanded conflict.

Heightened bellicosity in Arabia.  The tension between Saudi Arabia and Iran is especially high right now, and most of the initiative for making it so has come from the Saudi side.  The ascent to power of the Saudi king’s inexperienced son, Mohammed bin Salman, has something to do with this.  The young crown prince has talked about how “we will work so the battle is there, in Iran.”  He has used the relatively minor link between a Yemeni group and Iran as the excuse for prosecuting a war that has turned Yemen into a humanitarian disaster.  His most recent destabilizing move has been the fracturing of the Gulf Cooperation Council for the sake of bashing Qatar, one of whose listed offenses is to have more-or-less normal, peaceful relations with Iran.  The potential for the United States being dragged into an escalation of this mess is significant, especially given Trump’s inclination so far to go all in with the Saudis.