The Iran Nuclear Agreement: The Choice 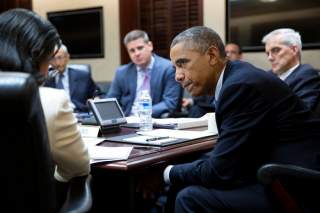 Completion of the agreement to restrict the Iranian nuclear program puts into sharp relief the choice for anyone who weighs in on the topic and especially for the U.S. Congress, which will have an opportunity to accept or reject the deal. Gone is any meaningful kibitzing on how well the negotiators are doing their jobs. Gone are endless speculative permutations of how different issues might be resolved. Gone is conjecturing about how the outline that was the framework agreement announced in April will be fleshed out with detailed terms. The question has been stripped down to a simple and easy-to-understand form: it is a choice between the agreement that has just been announced, and no agreement at all about the Iranian nuclear program.

It has always been a fantasy that a "better deal" than what emerges from these negotiations would somehow be possible. The long, arduous, deadline-extending nature of the negotiations that ended in Vienna makes the notion that something “better” could have been wrung out of the Iranians seem all the more phantasmagorical. Awareness that five other countries besides the United States and Iran are parties to this agreement, and that some of the most recent hard negotiations have taken place within the P5+1, ought further to dispel this notion.

It is remarkable how, on the very issues on which many opponents of any agreement with Iran claim to be focusing, matters would be much worse if they achieved their goal of killing the agreement. If a supposed problem is, for example, that Iran is being permitted to have too much enrichment infrastructure, it would be worse under the alternative of no agreement, in which Iran could expand that infrastructure without limit. Or if it is a problem that certain restrictions would be binding for only ten years or so, it would be worse under the no-agreement alternative, in which there would be zero years of restrictions. And so forth.

As the inevitable obfuscation about this agreement ensues over the coming weeks, the public and the Congress need to be reminded of exactly what the choice is, and of how simple and clear that choice is notwithstanding the obfuscation.

And those who argue or vote against the agreement should be held to account for what they in effect are arguing or voting for. They should be made to explain to the rest of the country why, whatever may be the true reasons for their opposition, they are supporting a step that would not only kill the best chance for ensuring the Iranian nuclear program remains peaceful but also would remove the special restrictions and scrutiny to which that program is subject now. They should be made to explain why, after their endless alarms about Iran's nuclear activity, they are supporting a step that would unleash that activity.