Panic over the ISIS Offensive in Iraq: "Everyone should take a deep breath." 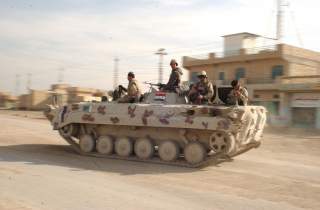 The recent offensive action in Iraq by the group that currently calls itself the Islamic State in Iraq and Syria, or ISIS, has generated a surplus of alarm and excitement among the policy cognoscenti in the United States. The capture by the group, at least for the time being, of the city of Mosul is described as a “game-changer.” Commentators cry out for mobilization to wage War on Terror II, seen as an urgent global struggle against bad guys from Mosul to Karachi and beyond. Such reactions stem partly from our spatial sense kicking in whenever events can be represented as lost territory or lost cities. Now ISIS is described as being on the march to Baghdad, just as a couple of years ago the Pakistani Taliban was described as being on the march to Islamabad.

Everyone should take a deep breath.

What makes both ISIS and its recent advances bad news can be recapitulated easily. This is a really vicious group that has done a lot of awful things to people under its control. Almost everything it stands for or represents is repugnant to our own values and interests. It has strengthened itself through its recent gains with capture of equipment and, as is usually the case amid conspicuous success on the ground, with increased recruitment appeal. Having said all that, several other observations are important to keep in mind in considering what U.S. policy ought to be.

We should be cautious about evaluating the significance of the latest events and labeling them as turning points or game-changers. There is a natural tendency to overstate the significance of the most recent happenings and to overlook longer-term developments of which they are a part. The longer-term developments of which the rise of ISIS is a part had their biggest game-changing moment about eleven years ago.

For ISIS to have control over more rather than less territory in western Iraq or eastern Syria is not what matters regarding any threat it may pose to U.S. interests. Having part of Nineveh Province in addition to part of Anbar does not increase the chance that U.S. citizens will die at the hands of ISIS, however much unpleasantness this entails for the citizens of Nineveh. To believe otherwise is to subscribe to the fallacy that real estate is what defines terrorist threats.

If ISIS were to turn its guns and its bombs directly against the United States, this would most likely be in response to the United States turning its guns directly against ISIS. Even among violent Sunni extremists, only a fraction ever subscribed to Osama bin Laden's strategy of hitting the far enemy as a strategy for toppling the near enemy. And even bin Laden was stirred into action only when the far enemy took up residence with the near enemy in the form of U.S. troops in his homeland of Saudi Arabia. Foreign military activity or occupation continue to be the prime motivators for terrorism against foreigners.

The current rise of ISIS has been made possible by the exclusionary practices and increasingly authoritarian tendencies of the Maliki government in Baghdad. Maliki's regime is a narrowly based Shiite regime, and most Sunni Arabs do not see a future for themselves in an Iraq led by Maliki. In such a situation, the extremist message has appeal. The political situation in Iraq is in this respect an unsurprising consequence of the political culture that was left when the Baathist regime was deposed. The one reasonable thing Washington can do with any hope of ameliorating the situation is to condition aid to the regime on substantially broadening political involvement and on decentralizing power to such an extent that (building on the autonomy that the Kurdish north has enjoyed for over two decades) Iraq would barely be a unitary state.

Any outside use of military power would at best furnish a temporary respite from the processes that we see playing out. We know that because we have been through all this before. The “surge” of several years ago was supposed to provide space and time for Iraqi political interests to work out their differences. 30,000 additional U.S. troops failed to lead to any working out of those differences, and the outcome is the mess we see today.

It is fantasy to think that any of this would have been any different by extending the unwelcome U.S. military presence any longer. Either fantasy, or just the usual playing of politics and bashing of the incumbent administration. It is not credible to contend that what was not achieved in eight and a half years could have been achieved in another two and a half years (or that there ever would arrive a time when the war would end and not be a failure). For those who supported the Iraq War to contend this is, as Joseph Cirincione puts it, like driving a car into a crowd of pedestrians and then blaming the emergency medical technicians for not saving the lives of the injured.

Although the practices of the Maliki regime are sustaining the appeal of radical messages, that appeal is shallow. ISIS does not offer anything that could be the basis of long-term support and legitimacy. We have experience to go on here, too. Even the temporary reduction in violence in an earlier phase of the Iraqi civil war was due not so much to the surge as to Sunni Arab disgust and abhorrence over the practices of radicals in Anbar who evolved into the present ISIS. If Iraqi Sunnis are given alternatives to an arrangement in which they are lorded over by a narrow, authoritarian Shiite regime, we will see a similar response.

Two final observations are directed especially at those who supported the game-changer of eleven years ago: the launching of the Iraq War. One is that all of the immense costs of that ill-fated expedition—the thousands of lost American lives, the greater numbers of broken bodies, the trillions in long-term monetary costs, and all the rest—are sunk costs. There is no way to get them back. There is thus no basis for investing still more in Iraq in a feckless effort somehow to gain redemption for one of the biggest and costliest mistakes in American history. Launching the Iraq War was a blunder; accept that and get over it. The psychological urge is strong to double down on losses with the idea that those who died shall not have died in vain. But psychological urges do not make good policy.

The last observation is that ISIS is a direct result of the U.S. launching of the Iraq War. Before the American invasion, nothing like it existed—not in Iraq anyway, but only in the fevered minds of war-makers eager to find themes to use as selling points to get public support for the war. If we feel fright and revulsion over this group, let that be a reminder of how mistaken was the decision to launch the war, and how mistaken is the broader exceptionalism-based belief, as Robert Merry discusses, in the magic of military intervention.