The Operational Code of President Trump 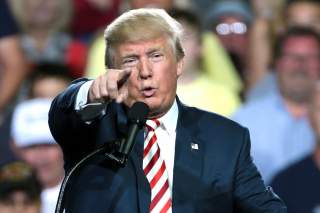 Press reports indicate that later this week President Trump will “decertify” the nuclear agreement known as the Joint Comprehensive Plan of Action (JCPOA), relying on a clause in the relevant review legislation that permits the president to make such a declaration even if Iran is fully complying with the accord.  That Trump has decided on this course has nothing to do with the terms of the JCPOA, with Iran, or with Iranian actions; he has not advanced a convincing case, or even a coherent argument, as to how those considerations provide a reason to cashier an agreement that is working.  His decision has nothing to do with any careful analysis of what would be the most prudent policy toward Iran or toward nuclear proliferation; the reporting indicates that he has resisted or ignored any such analysis of this issue that his advisers have tried to undertake.  In fact, Trump’s decision has nothing to do with U.S. interests.

Trump’s action regarding the JCPOA conforms instead with a personal decision-making rule that has guided his actions on a variety of issues, foreign and domestic.  It is a guideline that has provided a consistent streak in a presidency that otherwise has been filled with inconsistencies.  That personal rule is to attack, and preferably to destroy, any significant accomplishments of the previous administration.

This is the operational code that explains, better than any other explanation, the pattern of Trump’s decisions on major issues.  It is a pattern that in domestic affairs has most conspicuously included Trump’s determination to destroy the health care system under the Affordable Care Act (ACA) as well as his undoing of salient measures of the previous administration involving, for example, environmental protection or the Deferred Action for Childhood Arrivals (DACA) program.  In foreign policy the pattern has included precipitate withdrawals from the Paris climate change agreement and the Trans-Pacific Partnership (TPP), despite overwhelming support by other nations for continuing those agreements.  It has included punishment-like downgrading of U.S. relations with Cuba despite the absence of evidence that the Cuban regime was responsible for whatever caused the mysterious health problems of U.S. diplomats in Cuba.  Trump’s posture toward the JCPOA is part of the same pattern.

When some of Trump’s policies have appeared substantively inconsistent with the rest of his policies, explanatory consistency is restored if we think in terms of what was or was not considered a significant achievement of the Obama administration.  There has been some head-scratching, for example, over the Trump administration’s lifting of numerous economic sanctions on Sudan despite the lack of progress on problems such as the conflict in the Darfur region.  The lifting was a sensible acknowledgment by the administration that continued punishment for the sake of punishment was not likely to bring any better results—an acknowledgment quite at odds with Trump’s postures toward Iran and Cuba.  The difference is that, although détente with Sudan had begun under Obama, few people outside of government noticed.  This was much unlike the opening of diplomatic relations with Cuba or the negotiation of the nuclear agreement with Iran, both of which were widely regarded as major features of Obama’s foreign policy.

Trump’s determination to destroy what his predecessor had wrought follows naturally from his demagogic campaign, which, as is generally the case with demagoguery, strove to portray every part of the status quo as horrible regardless of what may have been the actual state of affairs. Trump’s inaugural address, in which he talked of “carnage” wracking the United States, formed a seamless transition from campaign to presidency.  Much of his subsequent effort has been aimed at making his campaign rhetoric appear true.  This he has done mainly by lying, but also by using the powers of the presidency to destroy, impair, and impede.  Reifying the rhetoric may appear to Trump to be almost all he has going for him in forming his own foreign policy legacy, given that his knowledge of foreign affairs does not appear to extend much beyond what he hears on Fox and Friends.  If Trump has ever had a genuinely strategic thought about America’s place in the world, it is hard to identify what that thought is.

Single-minded dedication to destroying whatever one’s predecessor did is an awful way to make foreign policy.  Regardless of legitimate criticisms one may have of what the predecessor did, a presumption that everything done was wrong is itself almost certainly wrong.  Even if one can think of a better way to have advanced the national interest, an advance is still an advance.  Abrupt reversal of anything significant done during the previous presidency has the added cost of damaging U.S. credibility in the eyes of foreign governments, who are left to wonder whether the United States can be trusted to stick to any of its undertakings and commitments.

We should not underestimate Trump’s willingness to harm American interests as he pursues his self-assigned mission of destruction.  The Trump administration’s management of the Affordable Care Act is a glaring demonstration of that.  That management is largely sabotage, through cuts in benefits and especially changes aimed at discouraging enrollment in the system.  The sabotage has even included refusal to approve steps by Republican-controlled state governments to stabilize insurance markets and lower premiums.  There is no possible explanation for the administration’s posture other than as an attempt to make the health care system fail and thereby to make believable the rhetoric about the ACA being horrible, even if this means harming the coverage and ultimately the health of American citizens.  Similarly, we should not expect Trump to be bothered much about the harm caused by his approach toward the JCPOA, which will at a minimum isolate the United States as well as start a process that may reopen paths to an Iranian nuclear weapon that the JCPOA has closed.

Trump has been able to go on his destructive path not only because of his considerable demagogic talents but also because he has had enablers.  These have included persons in his own party who seem willing to overlook just about anything in the way of presidential excesses as long as they get upper bracket tax cuts and conservative judicial appointments.  There also are many in Congress, also in the president’s party, who have followed the oppose-anything-Obama-did line, and particularly have done so with the ACA and JCPOA.

Recently there has been a bit more willingness even in that party to call out the excesses for what they are.  This is exemplified not so much by the secretary of state’s colorful description of his president as a “f------ moron” but rather the more thoughtful observations of Senator Bob Corker about Trump’s international recklessness.

Corker, as chairman of the Senate Foreign Relations Committee, will be a key figure in what comes next for the JCPOA after Trump withholds certification.  A subsidiary part of Trump’s operational code is not to do dirty work himself but instead to goad others into doing it.  Throwing things into the lap of Congress is part of that technique, as Trump wanted it to be with DACA.  The review legislation regarding JCPOA—although it was written more with a Democratic president in mind—turns out to be well-suited to Trump’s use of this technique.  He can use withholding of certification as his personal statement of disapproval of the JCPOA while saying that his declaration does not constitute a violation of the agreement.  By itself, it doesn’t.  But non-certification is an invitation to Congress—where Iran-bashing is always one of the easiest things on which to muster a majority—to enact sanctions that either would blatantly violate the JCPOA directly or would go so far down a road of negating the economic portions of the agreement that the Iranians would throw up their hands in disgust and pronounce the accord void.

The choice facing members of Congress regarding Iran is defined by the president’s driving, overwhelming obsession to destroy his predecessor’s accomplishments.  Members need to decide whether they wish to be accessories to that obsession even though being so would mean dealing a major blow against nuclear nonproliferation, against hopes for reducing tensions in the Persian Gulf, against the full use of U.S. diplomacy to promote U.S. interests in the Middle East, against good relations with U.S. allies, and against U.S. credibility.