The Paris Agreement and Trump at his Worst 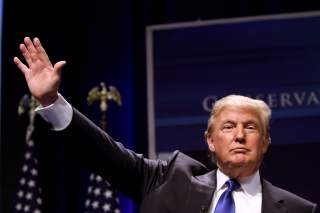 Donald Trump’s inexcusable withdrawal from the Paris climate change agreement was widely expected and amply telegraphed by Trump himself, of course.  And yet, there were reasonable grounds for hope that this might have been one place where Trump would move from being a demagogic campaigner to being a real president, one who deals not just with applause lines but with real U.S. interests and with America’s place in the world.  The substantive importance of the issue is unsurpassed, involving the fate of the planet.  The main reasons to stay with the agreement are compelling, involving not only the habitability of Earth but also economic dynamism, U.S. leadership, and U.S. credibility.  The non-binding nature of the agreement meant that there was not some unbearable onus that could be removed only through withdrawal.  And even though Trump has made much of fulfilling campaign promises, he already has allowed himself to be deflected from some such promises when they have collided with reality.  He has not torn up the nuclear agreement with Iran, in the face of Iran’s compliance with that accord.  And on the very day Trump announced the pull-out from the Paris agreement, he signed a paper that keeps the U.S. embassy to Israel in Tel Aviv, in the face of what would be certain uproar, deleterious to any prospects for peace, if he had moved the embassy as promised to Jerusalem.

The withdrawal from the Paris agreement is indefensible, and thus Trump’s statement announcing the move has much hot air, foreshadowing the increased hot air that everyone will be feeling without increased efforts to arrest global warming.  There is, for example, the usual Trumpian assertion about being able to get a better deal, as if this were possible with an agreement that has 195 signatories and with respect to which, given Trump’s withdrawal, the United States is now virtually alone.  He harangues about how the Green Climate Fund that the agreement established is “costing the United States a vast fortune.”  Barack Obama committed $1 billion to the fund and promised a total of $3 billion through 2020; for comparison, the proposed increase in military spending in Trump’s budget for fiscal 2018 is $53 billion.  Trump repeatedly complains about what China will be allowed to do while ignoring completely the leadership role that China is assuming in moving to clean energy.  He predicts economically crippling blackouts and brownouts under the agreement while ignoring completely the rapid progress in implementing generation of renewable energy.  He avows that he “cares deeply about the environment,” which is a laughable claim in light of what Trump has been doing not only to climate change but also to the Environmental Protection Agency and to stewardship of public lands.

Opposition to the Paris agreement reflects, as Heather Hurlburt observes, some larger patterns within American political ideology that go beyond the president himself and that Trump has exploited.  Those patterns, as Hurlburt notes, are related to the unusual American experience of being a superpower, an experience that also underlies several other unconstructive American habits of perceiving and dealing with the outside world.

But the president’s withdrawal is also very much a statement about Trump himself.  Given the reasons that one might have expected a better decision on this issue, the decision demonstrates that Trump’s worst and most destructive qualities are deeply entrenched.  It demonstrates that things are unlikely to get much better, with many other issues, under Trump.  The episode shows that Trump will continue to play to a narrow base that squeaked him through to victory last November rather than being president of all the people, let alone a leader of the free world.  It shows that campaign themes and the urge not to do whatever Obama did will continue to be more important to him than will enlightened interest, even enlightened self-interest.  It shows that he will continue to shove aside even the most glaring and indisputable facts if they conflict with the themes.  It shows that his capability to focus is very short in terms of both time and space.  And it shows a deficient moral sense, including in the respects in which morality is involved in what a generation bequeaths to future generations.

As citizens brace and prepare for three years and seven plus months more of this, the problem of climate change itself should be at the top of issues that require not just bracing and preparation but also creative thinking about how to deal with the issue as long as this kind of destructive force is in control of the U.S. government.  A reminder is in order that Americans are citizens not only of the United States but also of states, localities, and civil society and also—uniquely important to this issue—citizens of the world, the same world that climate change endangers.  Regarding the smaller units, what states, cities, and the private sector are doing to transition to clean energy deserves all the support it can get.  Regarding citizenship of the world, Americans will have to consider carefully how to respond to the rest of the world’s response to the irresponsibility on this issue in Washington.  The responsible posture may entail not just respect and understanding but also support for some of those responses.  Martin Wolf of the Financial Times has even written about sanctions as a response to U.S. withdrawal from the Paris agreement.  More plausible, more worthy of support from individual Americans, defensible under the rules of the World Trade Organization, and already talked about among foreign government officials, would be a carbon tariff applied to U.S. exports.

Our children and grandchildren, feeling increasingly the effects of climate change, will read about what Trump did and wonder how our generation could have placed such a small-minded man in such a position of power with such lasting and damaging consequences.