The Plummeting of U.S. Standing in the World 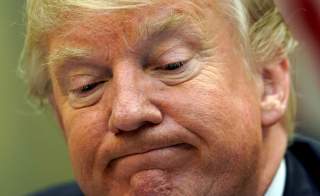 The Pew Research Center released last week the results of one of its periodic surveys of global views of the United States and its leadership and policies.  More than 40,000 people were polled in 37 countries across six continents, with the polling conducted between February and May.  The most salient finding is a dramatic drop in confidence in the United States and more specifically in the current U.S. leadership.  When asked about “confidence in the U.S. president to do the right thing in world affairs,” 22 percent of those surveyed expressed confidence in Donald Trump and 74 percent expressed no confidence.  This is a huge reversal from the last time the same question was asked about Barack Obama late in his presidency, in which 64 percent expressed confidence and 23 percent no confidence.

The rapidity as well as the magnitude of the change is striking.  Trump’s numbers approach those of George W. Bush near the end of his presidency, but in Bush’s case those depths were reached only after a long decline during his two terms.  Trump has managed to bum people out around the world during his first four months in office.

In only two of the 37 countries surveyed was there an increase in confidence in the U.S. president since that last poll taken during Obama’s presidency.  One is Israel, with a modest rise from 49 to 56 percent, although the latter figure is still slightly below the average for all five Pew polls taken during Obama’s tenure.  A bigger rise is in Russia, where the figure of 53 percent having confidence in Trump is higher than any of the results in Russia for either Bush or Obama.  These results are not surprising in view of the deference Trump has shown to the governments of those two countries.  The Pew survey did not include any Gulf Arab countries, but if it had, we perhaps would also have seen a rise in the numbers, for the same reason, in Saudi Arabia.

The overall results are not surprising either, in view of the many other indications of foreign popular sentiment toward Trump and his administration, as well as similar expressions from foreign leaders.  The latter have included, for example, statements from the chancellor of Germany and the Canadian foreign minister reflecting a lack of confidence in Trump’s leadership.

Although not surprising, the importance of what the poll results indicate for the success or failure of U.S. foreign policy and the advance or decline of U.S. interests is insufficiently appreciated within the United States.  The problems are not limited to the chemistry between leaders that seems to get the most press attention at summit meetings, or to Trump’s boorish behavior, which has become a fixture at such meetings.  Nor are they limited to the broader perceptions of Trump personally, as striking as those perceptions are.  As documented by the Pew survey, there is less confidence in Trump to do the right thing than in Xi Jinping of China or Vladimir Putin of Russia.  The three adjectives that respondents most attached to Trump were “arrogant,” “intolerant,” and “dangerous”.

The Trumpian slogan of “America first” tends to disguise the larger implications of such results.  Set aside for the moment the falsity of that slogan, given that subcontracting segments of foreign policy to the Israelis or Saudis (or glossing over whatever Russia may be up to) is not putting America first.  The slogan, and the set of attitudes underlying it, implies a nonchalance about foreign attitudes and a belief that Americans need not care what foreigners think.  That belief misses much of how foreign attitudes and perceptions, which influence foreign government policies, can redound, for good or for ill, on U.S. objectives.

Successful foreign policy involves getting other states to act in ways that advance or protect the interests of one’s own state.  To the extent that the people and policymakers in those other states have “confidence in the U.S. president to do the right thing in world affairs,” they are more likely to act in the way the U.S. president would like them to act.  Lacking such confidence, they are that much less likely to act in accordance with U.S. wishes.  This principle applies regardless of the content of U.S. policy and grand strategy.  It is the reason the plunge in this kind of confidence from late Obama to early Trump is important.

The survey results also provide perspective on criticisms and standards applied to previous administrations.  Criticisms of Obama about supposedly surrendering U.S. leadership look especially strange now, considering what has come after him.

Image: U.S. President Donald Trump looks down while speaking to reporters about healthcare during an energy policy discussion with leaders of American Indian tribes and U.S. governors at the White House in Washington, U.S., June 28, 2017. REUTERS/Kevin Lamarque.