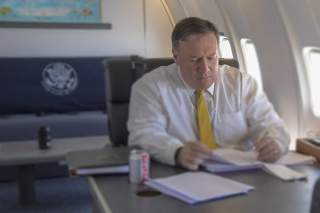 Having such a bête noire serves the purposes that foreign foils have long served for leaders of many countries, not just the United States. The political benefits include rally-around-the-flag effects, deflecting blame away from the true source of troubles, distracting attention from one’s own faults and failures, and providing an opportunity to look tough against a supposed threat. For Trump, who has been criticized for softness toward foreign authoritarians, the opportunity to display toughness is especially attractive. Note that, as with the don’t-care explanation, none of this has anything to do with the interests of the United States but instead only with the narrower political interests of individual politicians and administrations.

The attraction of forever keeping Iran as a bête noire for the United States is even more obvious for Iran’s regional rivals. This especially means Saudi Arabia, along with its sometime ally the United Arab Emirates and its satellite Bahrain, and Israel. Those regimes are content to see a dead-end U.S. policy toward Iran that offers no prospect of any thawing of relations between Washington and Tehran. Such a policy assures that Washington always will take their side in their local disputes. It means continued U.S. cover for their own excesses and contributions to regional instability, with blame always focused on Iran. Thus Saudi leaders were delighted to hear Pompeo demand an end to Iranian aid to Houthi rebels in Yemen, while he said nothing in his speech about the far larger role of Saudi bombardment in turning Yemen into a humanitarian disaster. Israeli leaders were delighted to hear demands about ending Iranian aid to Hamas, in a speech that made no mention of the role of the Israeli military in the killing of scores and the wounding of thousands of what were overwhelmingly unarmed protesters in the Gaza Strip.

That Trump’s Iran policy is so much to the liking of Iran’s regional rivals raises the relevance of a story, fleshed out by recent reporting by The New York Times, of the role of those rivals (and of their sympathizers and supporters within the United States) in getting Trump elected. Amid the justified attention to Russia’s role in the 2016 election, this other story of foreign interference in the same election has been largely overlooked. Indeed, what was looked upon as one of the earlier chapters in the Russia story—former national security advisor Michael Flynn admitting that he lied to the FBI about a meeting he had with the Russian ambassador—was really more of an Israel story. Flynn’s objective in the meeting was to get Russia's help in killing a resolution of the United Nations Security Council that criticized Israel’s building of settlements in occupied territory.

The issue of Russian interference in the election and dealings with the Trump campaign is still very important, and Trump’s frantic efforts to derail the investigation by the special counsel strongly suggest that there is more fire yet to be uncovered underneath the voluminous smoke that already is visible. But to compare the significance of the different sources of foreign interference in American politics, consider the reason any such interference should concern U.S. citizens: the possible bending of U.S. policy to serve the interests of the interfering foreign government rather than the interests of the United States. For Russia, it is a mixed picture. Vladimir Putin no doubt believes he got his money’s worth from his interference in the discrediting of American democracy and the damage to U.S. credibility and alliance relationships that Trump’s presidency has entailed. As for bilateral U.S.-Russian relations, however, the political toxicity of being seen to make nice to Moscow under the Trump administration has meant that the relationship is not a lot different than it may have been under Hillary Clinton.

For Iran’s regional rivals, however, the Trump administration’s policies have been an unalloyed gift. Expressions of concern in the U.S. Congress about the carnage in Yemen have not caused the Trump administration to abandon its support for the Saudi air war there. Mild administration criticism of the Saudis has centered more on trying to heal the Saudi rift with Qatar, and the healing effort itself has an anti-Iran thrust. Saudi crown prince and de facto ruler Mohammed bin Salman is still the favorite chum of favorite Trump son-in-law Jared Kushner.

As for Israel, Trump’s policies could hardly have been more to the liking of that country’s government if Benjamin Netanyahu had dictated them himself. Those policies have included the reneging on the JCPOA, the gift of a U.S. embassy in Jerusalem, apparent abandonment of any two-state solution worthy of the name, and unqualified diplomatic cover provided by U.N. votes and administration rhetoric—notwithstanding the damage all this causes to wider U.S. standing and relationships.

The dead-end policy toward Iran embodied in Pompeo’s speech thus has several roots, but perhaps the most conspicuous one involves a subcontracting of U.S. policy to Iran’s regional rivals. This practice could be called other things, but it certainly cannot be called America First.