The President Strikes a Nerve 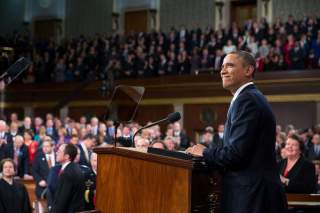 The most preposterous statement in the same piece is, “Increasing violence in Iraq, provocations by North Korea and an ongoing Iranian nuclear program stem from similar paralysis in the Oval Office.” The comment about Iraq seems to wipe eight years from recent history, including the mistaken launching of the war in the first place, rampant insurgency during the time of the previous administration, and a “surge” of U.S. forces that could only temporarily help to tamp the insurgency down. In North Korea, three generations of the Kim regime have made provocation a central aspect of grand strategy, with provocation being the most prominent feature of North Korean behavior for decades. And as for the Iranian nuclear program, which also has been ongoing for decades, the preliminary agreement negotiated last fall already has achieved severe limitations to the program that years of sanctions and bluster alone could not.

A hazard of the kind of flak represented by these misplaced criticisms is that they nourish a political climate that tends to push the administration toward mistaken paths, notwithstanding the kind of verbal pushback that Mr. Obama exhibited in Manila. The intervention in Libya and the “red line” in Syria may represent such mistakes—although, to be sure, there also were forces within the administration pushing in the same direction. Christopher Fettweis has aptly summarized the challenge:

We know...that a set of deeply pathological beliefs exists within the so-called "marketplace of ideas," or arena of debate over U.S. foreign policy. As a result, we also know that the Obama administration will continue to be bombarded by a variety of misapplied analogies and faulty reasoning, generated largely by people who ought to know better, and that the president will have to tune out a great deal of noise and filth, to paraphrase Kennan, if he is going to chart a wise path forward.