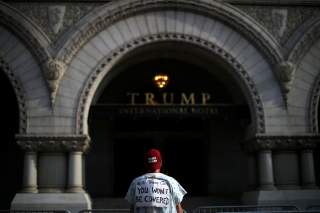 The unethical blurring of private interests and public business is a hallmark of Donald Trump’s presidency.  That blurring has increasingly involved U.S. foreign policy.  The possible effects on U.S. foreign relations may be subtle and largely out of public view, but they arise every time, for example, foreign governments wanting something from the United States bring their business to the hotel that Trump's company runs a few blocks from the White House.

The blurring was more openly displayed this week as Donald Trump Jr. traveled to India—with security provided by the U.S. Secret Service, assisted by the U.S. embassy—to drum up business involving the Trump Organization’s real estate endeavors.  Sales reportedly have been good, aided by the chance to rub elbows with the U.S. president’s son if prospective buyers paid a $38,000 booking fee toward a Trump high-rise project south of New Delhi.  The mixing of public policy and private business was scheduled to go even farther, with the younger Trump to give a speech on “Reshaping Indo-Pacific Ties: The New Era of Cooperation” at a conference just before Indian Prime Minister Narendra Modi was to speak at the same podium.  But this bit of mixing was too blatant for even the Trumps to blow off the criticism, and Junior instead substituted a different sort of public appearance.

Presidential daughter Ivanka Trump currently is in South Korea, for the close of the Winter Olympics.  Kim Yo-jong, sister of North Korean dictator Kim Jong-un, got much attention as “North Korea’s Ivanka” when she was in the south for the opening of the games.  Now the real Ivanka, if true to form, will be mixing public and private business again.  Her past involvement with the East Asia region has entailed the leveraging of official contacts to benefit sales of her brand of jewelry and accessories.

The intrusion of private interests into U.S. foreign policy under this administration is not limited to the Trumps’ own commercial interests.  The latest news on this subject is that casino magnate Sheldon Adelson is offering to pay for construction of a U.S. embassy in Jerusalem.  Such an offer constitutes a sort of bonus to show Adelson’s satisfaction with how his earlier large financial contributions to Trump’s campaign helped to buy President Trump’s decision to move the U.S. embassy from Tel Aviv to Jerusalem.  This move was a personal goal of Adelson, based on his personal affinity with Israel exceeding any affinity he has with the United States.  Looked at from the standpoint of U.S. interests rather than private interests, the move was a huge mistake.  It isolated the United States and was a major blow to any remaining hope for a two-state solution to the Israeli-Palestinian conflict.

Many processes are in play here, including the power of well-known lobbies and the role of money is U.S. politics.  But as with any of Trump’s excesses, it is worthwhile to ask whether we are witnessing an extreme manifestation of trends in America that already were well along before Trump ran for office.  In this case, what we see is part of a trend, which became pronounced during the last two decades—the era of the Tea Party and of the Gingrich style of scorched-earth political warfare—away from the concept embodied in a preambular phrase in the U.S. Constitution: the “general welfare”. The trend involves rejection of any idea that some of the most important things that citizens do and experience, and some of the most important ways in which their interests are affected, can only be done as a community—and that in many cases community necessarily means government.

The trend is most apparent on domestic matters.  It is seen in the tearing down of a health care system without any adequate replacement.  It is seen in the depleting of the public treasury with disregard for the down-the-road fiscal implications.  It is seen in a rejection of Oliver Wendell Holmes’s observation that taxes are what we pay for civilized society.  It is seen in the every-man-for-himself approach to gun violence that calls for arming schoolteachers and goodness knows whom else.

It wasn’t always this way.  Much in American history has been an embrace of the common interest and, per the Constitution’s preamble, a promotion of the general welfare.  The policies involved have included not just the likes of the New Deal and the Great Society and they have come not just from the left rather than the right.  The history has run from Alexander Hamilton’s industrial policy to Henry Clay’s American System to Dwight Eisenhower’s interstate highway system.  Today what passes for an “infrastructure plan” is mostly an invitation to states and localities to spend money they don’t have.

The corollary in foreign policy is a rejection of the concept that the United States has important, continuing interests, in which all U.S. citizens share, which must be vigorously defended and represented to the outside world, and with regard to which any one group of office-holders is only a temporary steward.  Rejection of this concept leads to the casual mixing of foreign policy and private business interests.  It leads to the selling out of major foreign policy decisions to the highest bidder.  It leads to a president expressing nonchalance about many senior-level vacancies because “I’m the only one that matters.”  It leads to devastation of the State Department's budget and of the department’s ability to represent and defend vigorously U.S. interests before the outside world.

Given these prevailing attitudes and given the penury being forced on the State Department, perhaps a future step in the privatization of U.S. foreign policy will be the selling of naming rights.  Maybe the building to be erected in Jerusalem will have a sign in front identifying it as the “Sheldon Adelson Embassy” or, along the lines of most naming rights deals, the “Las Vegas Sands Embassy."