The Rule of Law in Jeopardy 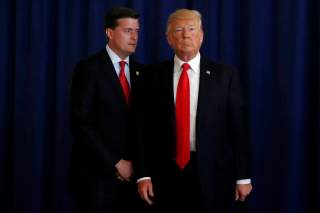 After more than a year of excesses by a president whom not only centrists and progressives but also a thinking conservative such as George Will can aptly assess to be the worst U.S. president ever, outrage fatigue has set in on many fronts.  Throwing government ethics into the trash, indulging in other personal conduct that once would have been a certain disqualifier for higher office, and so on—Donald Trump has given the outraged too much ground to cover.  Even just limiting oneself to high policy, it is hard to know where to start: the plummeting of the standing of the United States in the eyes of the world, the acceleration of a drive toward global environmental catastrophe, or something else.

A good case can be made, however, for priority in apportioning our outrage to be given to the attacks on critical institutions of American liberal democracy.  This part of the Trumpian record also has several facets, including, for example, the assaults on a free press.  But the one facet that has reached a fortissimo in recent weeks and in some respects is most alarming is the effort to take down the Justice Department and FBI and to make law enforcement servile to narrow political objectives.

One must always include the caveat that tomorrow or next week this president may do something else—such as reckless nuclear brinkmanship—that may warrant even louder and more immediate alarm bells.  But there is a good reason that interior ministries, internal security services, and national police forces are among the first institutions that aspiring authoritarians want to subdue and control.  They are the means for turning what had been a democracy into a police state.

Some among the outraged have looked for glimmers of hope, perhaps in the interest of avoiding mass despair.  Washington Post columnist Richard Cohen, in likening Trump to the commie-hunting demagogue Senator Joseph McCarthy, noted that McCarthy overreached when he attacked the Army, and that “Trump may have overreached by going after the FBI.”  Cohen does qualify this glimmer by further observing that “McCarthy, an alcoholic, wrecked himself, but I wouldn’t count on Trump doing the same.”

Max Boot also alluded to McCarthy while comparing him not to Trump but instead to Rep. Devin Nunes (R-CA), who has functioned as Trump’s factotum in denigrating the FBI and anyone having to do with the investigation into Russian interference in the 2016 U.S. election.  Boot accurately explains how Nunes’s efforts along this line have been without substance or merit, but the role of Nunes—whom House Speaker Paul Ryan appointed to his committee chairmanship—points to a larger and alarming aspect of Trump’s already alarming campaign against Justice and the FBI.  An entire political party, with a few commendable exceptions, has been covering for, condoning, and even actively supporting many of Trump’s excesses.  The excesses have included not only damaging policies such as turning sound fiscal policy upside down but also the assault on nonpartisan law enforcement—for the purpose of discrediting pre-emptively anything coming out of the special counsel’s investigation that will be damaging or politically embarrassing to Trump.

Political circumstances today are different, in important and relevant ways, from the McCarthy era.  Moderate Republicans are an all-but-extinct species, in contrast to the 1950s, when a Republican paragon of moderation was in the White House.  Today’s scorched-earth partisanship is amplified by other changes in how the American body politic operates, including the development of tribal belief systems sustained by social media and slanted news and talk programs on mass media.

We should have been forewarned, even before Trump was elected, about where things were heading regarding the politicization of law enforcement.  Trump’s talk during the campaign of prosecuting his opponent, and the chants at the Republican convention of “lock her up”, were unlike anything heard not only during the 1950s outside of McCarthy’s calumnies but also through most of U.S. history.  It is instead what is heard in failed democracies abroad.

Even if Trump doesn’t get his wall along the Mexican border, Nunes is building him a wall in committee offices, all the better to preclude any Democratic interference in, or even awareness of, future efforts to subvert the special counsel’s investigation.  Meanwhile, Nunes’ destruction of responsible bipartisan oversight in an important committee may be a canary in a coal mine in which there will be other elements of the nonpartisan rule of law getting blown up.  Notwithstanding the best efforts of dedicated officers in the FBI, it will be difficult to prevent the assaults from above and from Capitol Hill from having some politicizing effect on the selection, pace, and direction of investigations.  FBI Director Christopher Wray so far has sounded forthright about protecting the FBI’s mission, but the silence of Attorney General Jeff Sessions on this subject is inexcusable.  Everybody recognizes that there are policy matters on which the attorney general is the president’s man and does his bidding, but fulfilling the duty of independent and objective law enforcement is not supposed to be one of them.

And what about law enforcement elsewhere, such as at the chronically underfunded and understaffed Internal Revenue Service?  Amid an anti-tax ethos combined with disdain for objective law enforcement, it is easy to see neither the administration nor congressional Republicans caring much if tax avoidance increasingly slides into tax evasion, or caring about whether the IRS has enough resources to enforce the law.  This will make the deficit even worse, because a dollar used for enforcing tax laws returns more than a dollar in owed taxes.  It also will make the United States look ever more like third world countries whose finances as well as political procedures are screwed up.

Meanwhile, try to sustain your outrage.