The Safety and Sameness of Hillary Clinton's Foreign Policy 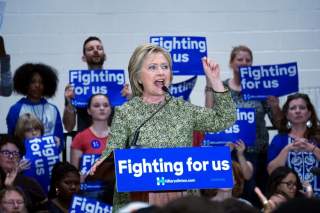 The easy part for Hillary Clinton and her speechwriters in constructing what was billed as a major foreign policy speech was to enumerate some of the many valid reasons that Donald Trump is unfit to lead the United States in its relations with the rest of the world. Clinton is correct that what has passed for Trump's ideas on foreign policy “are dangerously incoherent. They’re not even really ideas – just a series of bizarre rants, personal feuds, and outright lies.” Trump's efforts to sound coherent have been laden with contradictions and declarations that resemble bumper stickers more than carefully thought-out policy proposals. Some of his most specific and distinctive pronouncements belong in the realm of the fantastic, such as excluding all Muslims from the country, building a huge wall and somehow getting a neighbor to pay for it, and encouraging Saudi Arabia, Japan, and South Korea to get nuclear weapons. Just when he has seemed to have made a suggestion that sounds fresh and constructive, such as referring to neutrality in the Israeli-Palestinian conflict, he suddenly veers in a much different direction.

Clinton is correct that Trump is “temperamentally unfit” for the presidency and that it is easy to imagine him “leading us into a war just because somebody got under his very thin skin.” When Trump rightly labels past military expeditions in Iraq and Libya as mistakes, he claims a past personal opposition to those interventions that is nowhere near as clear as what the record indicates. And that record in turn reflects how Trump has so little involvement or experience in foreign affairs that he did not even have to express any opinions about such military operations at the time they were undertaken.

That lack of experience points to one of the biggest and most important differences between the two presumptive presidential nominees. Clinton is right to draw attention to that difference, and to note that “there’s no risk of people losing their lives if you blow up a golf-course deal.” Trump's complete lack of public service—which would be unprecedented among incoming U.S. presidents—contrasts sharply with Clinton's experience. Her service in the Obama administration is the sort of experience that the nation once appropriately valued so highly that five of the first eight U.S. presidents were former secretaries of state.

Clinton's speech was much less than it could have been, however, by being structured around the criticisms of Trump and sounding as if she were defining herself mainly as the un-Trump. Such an approach is not going to satisfy those who sense that the United States has, through several administrations, been suffering from some fundamental misdirections. Many people who have that sense, even if they would have difficulty articulating exactly what would characterize a new direction, are attracted to Trump because, amid all the rants and incoherence, he seems to stand for change, including change in foreign affairs. Clinton's approach also is not going to satisfy those who have thought very carefully about the misdirection and have articulated the ways in which much U.S. national security policy has incurred great costs with meager results.

Clinton did, to be fair, express some policy preferences that not only are different from Trump's but also are specific and constructive. She was right to mention as a first priority that “we need to be strong at home. That means investing in our infrastructure, education and innovation – the fundamentals of a strong economy. We need to reduce income inequality...” She was also right to distinguish sharply her views from Trump's regarding climate change and the use of torture.

But in much of the rest of the speech she repeatedly fell back into aspects of a Washington conventional wisdom that have made for the persistence of problems rather than the solution of them. This was true, for example, in portions of her discussion of relationships with allies and adversaries. She showed a good understanding of what diplomacy with adversaries consists of when she remarked that these are “countries that share some common interests with us amid many disagreements” and that “Donald doesn’t see the complexity” involved. But she gave no acknowledgment that there also are mixtures of common interests and disagreements—indeed, not just disagreements but conflicting interests—in relations with countries commonly considered allies. This arose, for instance, when amid her appropriate defense of the diplomacy leading to the nuclear agreement with Iran she started talking about the security of Israel—without mentioning that the Israeli government has done all it can to subvert and kill the very agreement she was defending.

Clinton's discussion of policy on ISIS reflected the usual Washington approach of just doing more, especially more militarily, in response to such problems without stepping back to ask more fundamental questions about costs, effects, and where major U.S. interests lie. Clinton was correct in asserting that her “plan for defeating ISIS” is more specific and transparent than Trump's. But the “plan” appears to consist of current policies involving diplomacy aimed at settling the Syrian civil war while also saying that the United States should “take out their strongholds in Iraq and Syria by intensifying the air campaign and stepping up our support for Arab and Kurdish forces on the ground.” That all-too-commonly used phrase “take out” disguises a multitude of omissions of figuring out what happens next after such an adversary has been “taken out” and whether such action does anything at all on balance to reduce violence and extremism. The difference between “taking out” an adversary such as ISIS and, as Trump would put it, ”bombing the s—t” out of that adversary may mainly be one of the primness or vulgarity of the expression.

Clinton's overall approach is grounded in that central tenet of Washington conventional wisdom that, as she put it in the speech, “America is an exceptional country,” that “we lead with purpose, and we prevail,” and that “if America doesn’t lead, we leave a vacuum – and that will either cause chaos, or other countries will rush in to fill the void.” The awful metaphor of a vacuum, with the misleading notion that in any troubled place in the world if the United States does not occupy it then bad vapors will whoosh in, has underlain thinking that has repeatedly meant costly trouble for the United States, including in some of the places where U.S. troops are found today.

The longstanding, despite being damaging, conventional wisdom central to Hillary Clinton's thinking on foreign policy mirrors what was laid out at greater length in the recently released report from the Center for New American Security titled “Extending American Power”. As critical readers of that report have noted, it represents a mashing of neoconservatism and liberal interventionism and a recipe for repeating many of the failures that have contributed to the very unease and wishing for change that have helped to build support for Donald Trump, notwithstanding how little he has to contribute in the way of solutions.

This election year evidently is not going to be the year for positive redirection of U.S. national security policy. The first priority needs to be to keep dangerous incoherence out of the White House, because that is where the biggest potential damage to U.S. interests lies. Staying stuck in the rut of conventional wisdom is the relatively safer choice, although it's too bad we won't have a chance for something better.

Image: Hillary Clinton at a rally in North Carolina. Photo by Nathania Johnson, CC BY 2.0.