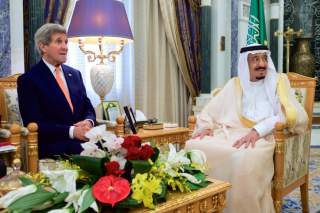 Saudi King Salman visits Washington this week amid disagreement between the United States and Saudi Arabia on a broad range of issues. Moreover, the disagreements are rooted in fundamental characteristics of the anachronistic Saudi regime. Many regimes around the world, and the political and social systems of which they are a part, are markedly different from what is found in the United States, but the Saudi polity is one of the most different. The anachronism that is Saudi Arabia represents a major problem for U.S. foreign policy, both because of the impact Saudi-related matters have on the Middle East and beyond and because of the close association between Saudi Arabia and the United States that has come to be taken for granted.

Little of this has anything to do with the just-completed agreement to restrict Iran's nuclear program, despite the attention that subject has been receiving. Riyadh is more likely to accept the agreement as a done deal—and already has publicly indicated its formal acceptance—than the accord's opponents in the United States and Israel. The Saudis will continue to look for ways to discourage others, including the United States, from developing warm relations with their rival across the Persian Gulf, but this will not preclude the Saudis themselves, along with the other Gulf Arabs, from undertaking their own rapprochement with Tehran, just as they have done in the past.

In hot spot after hot spot in the Middle East, U.S. and Saudi objectives and priorities diverge, even if in some loose sense they are considered to be on the same side. In war-torn Syria, the United States and Saudi Arabia have never agreed on whether the ouster of the Assad regime or the containment of ISIS should be the main objective. Saudi priorities are based on a variety of considerations that are specific to it and not to the United States, including hatred of the Assads for whatever role they may have played in the assassination of Lebanese prime minister Rafic Hariri, a special friend of the Saudis. Reflecting the different priorities and objectives is disagreement over selection and vetting of Syrian rebels to be deemed worthy of support.

In Iraq, Saudi priorities are influenced by some of the same sectarian motives that shape Saudi policy toward Syria. And again, such motives are quite different from U.S. interests. Desired overthrow of the regime is not the factor that it is in Syria, but distrust of the Shiite-dominated government in Baghdad is a major part of the Saudi approach toward Iraq.

In Yemen, the United States has allowed itself to become associated with a destructive and misguided Saudi military expedition, and thus also with the humanitarian tragedy that the operation has entailed. The main Saudi objective is to show who's boss on the Arabian Peninsula, another objective not shared with the United States. Saudi Arabia's operation has shown itself, more so than Iran, to be a destabilizing force intent on throwing its weight around in the neighborhood.

In his most recent column Tom Friedman identifies what may be the most worrisome thing about Saudi Arabia for U.S. interests: “the billions and billions of dollars the Saudis have invested since the 1970s into wiping out the pluralism of Islam — the Sufi, moderate Sunni and Shiite versions — and imposing in its place the puritanical, anti-modern, anti-women, anti-Western, anti-pluralistic Wahhabi Salafist brand of Islam promoted by the Saudi religious establishment.” Friedman notes that Islamist extremist groups that the United States has come to consider preeminent security concerns, including Al Qaeda and now ISIS, “are the ideological offspring of the Wahhabism injected by Saudi Arabia into mosques and madrasas from Morocco to Pakistan to Indonesia.”

The specific terrorist consequences of what the Saudis have done is justifiably an immediate concern for U.S. policy-makers. But the underlying bargain that Ibn Saud, the founder of the current Saudi kingdom, reached years ago with the Wahhabis also underlies much else that makes Saudi Arabia what it is today, and makes it the problem that it is. The kingdom's troublesome characteristics are inextricably linked to how Ibn Saud's offspring are trying to claim legitimacy and thus to cling to power.

Consider some of the chief characteristics of the kingdom. Saudi Arabia is a family-run enterprise in which the distribution and exercise of political power are every bit as medieval as they ever were in any country ruled by the Plantagenets. There is no religious freedom. Human rights in many other respects are sorely lacking. Women are still subordinated. It was considered a big deal when they recently were told they could vote and run as candidates—in elections to local councils with scant power and in which the king will still appoint half the members—but women still cannot function as independent persons in many aspects of daily life. They still are not allowed to drive.

It ought to be astounding that a place this far removed from the liberal democratic values with which the United States likes to be associated, even without considering the aforementioned divergence of objectives elsewhere in the region, still is considered a close partner of the United States. The usual, and to a large degree valid, explanation is that, as Friedman puts it, “we’re addicted to their oil and addicts never tell the truth to their pushers.” But there is another American attitude involved, which persists even in the shale-fracking era. Once a nation is considered a partner or ally in a region that is perceptually divided into allies and adversaries, the perceived line-up tends to stay fixed until and unless there is a political alteration sufficiently great to be labeled regime change.

And regime change would be the most troubling chapter of all in the Saudi story. Some Saudi leaders, including the late King Abdullah, seem to have recognized the need to move in the direction of modernization and liberalization, even if only at the glacial pace that is possible in a Wahhabi-committed family enterprise. It is an open question whether the regime will be able to keep this kind of change ahead of demands for change of a more drastic and radical sort. If it fails to do so, and the revolution comes, then the association of the United States with the ancien régime will an even greater problem for U.S. policy-makers than what they face now.