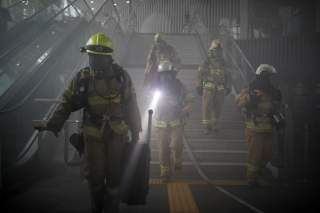 A recent op-ed from Senator Cory Gardner (R-CO) calls for officially designating Russia a state sponsor of terrorism.  Gardner offers a long indictment—a “moral case”, as he calls it—against Russia that mostly involves activities other than terrorism, such as invasions of Georgia and Ukraine and information warfare against Western democracies.  Such a designation would have little practical effect; as Gardner himself acknowledges, the United States already has imposed diverse sanctions on Russia using other rationales.  The senator’s proposal is an example of the too-common practice of affixing labels, especially the terrorist label, to try to implement policies that arise for reasons unrelated to the ostensible subject of the label.

The practice is related to the American tendency to see the world divided rigidly into good states and bad states.  Gardner’s piece exhibits that tendency as well, such as in describing Russia and Iran as “close allies”.  That is a mistaken description, despite those two countries cooperating in places, such as Syria, where their interests partially converge.  The Trump administration certainly has exhibited the same tendency, especially in much of the way it approaches the Middle East.  Donald Trump has complicated the good state/bad state division, however, with his curious soft spot for Russia and especially for its president, Vladimir Putin.  Probably a motivation for a Republican member of Congress such as Gardner to call for more symbolic bashing of Russia is to try to compensate for this Trumpian aberration and to restore Manichean simplicity by putting Russia fully in the bad state box.

Terrorism as a term and as a label is an especially attractive tool for playing such symbolic games because, although definitions of terrorism vary, everyone agrees that whatever it is, it’s bad.  It is tempting to use the term as an all-purpose pejorative.  One result is corruption of the official U.S. lists involving terrorism.  Entities go on or off the lists for reasons that may have nothing to do with terrorism.  This has been true to some extent of the list of foreign terrorist organizations, the one that applies to non-state actors.  A group such as the Iranian cult/terrorist group known as the Mujahedin-e Khalq can get taken off the list not because it has changed its stripes but because it has been the beneficiary of a well-financed lobbying campaign.  The corruption has been even greater with the list of state sponsors, which has never had much resemblance to actual patterns of governments practicing or supporting terrorism.

That last fact gets to one of the major downsides of using labels as all-purposes pejoratives, which is that the practice conveys a highly inaccurate picture of the phenomenon the label purports to represent, in this case terrorism.  Some states, such as Pakistan or Saudi Arabia, that have at times been up to their elbows in condoning or facilitating the activities of terrorist groups have never gotten on the list because other U.S. preferences have dictated otherwise.  Conversely, a state such as Cuba, prior to the opening of relations under the Obama administration, was kept on the list for essentially domestic U.S. political reasons long after it had ceased involvement in any activity that could remotely be described as terrorism.

Or consider which governments are or are not indulging in the clandestine assassination of political opponents on foreign soil, an act that meets most official as well as academic definitions of international terrorism.  Iran used to do that sort of thing but stopped doing it years ago.  The exceptions in recent years have been largely unsuccessful attempts to retaliate against Israel for killing Iranian scientists.  Israel has long been in the business of clandestine overseas assassination.  Its record has included not only skillfully designed hit jobs but also car bombs on city streets that have indiscriminately killed innocent passers-by.  It continues clandestine overseas assassinations to this day.  And yet Iran is the one that gets labeled the “number one state sponsor of terrorism” while Israel, for self-evident political reasons, has never had to worry about making the list.

Affixing the terrorist label, on either a state or a group, has a static quality that ignores the possibility as well as the reality of significant change.  Labels tend to be sticky.  The labeling disregards how terrorism is a tactic that different actors have used at different times for different purposes, rather than being a fixed set of bad guys.

Treatment of this subject by the press has not aided understanding.  In coverage of the protests along the border of the Gaza Strip, for example, it has become routine for any mention of Hamas to be accompanied by a statement such as, “The United States and European governments consider Hamas to be a terrorist group.”  Well, yes, Hamas certainly has done terrorism, but it also figures into issues and events in that part of the world in other ways, including as the winner of a free election when it was given the rare chance to contest one.  The recent events along the Gaza fence entail significant empirical questions such as how much Hamas has or has not changed its strategy and tactics, and what is the relationship between what the group has done and more spontaneous action that led to peaceful protests.  Sticking the “terrorist” label on the group implicitly sweeps these important questions aside.

As a matter of policy and not just press coverage, one should ask of any group or state to which that label has been affixed, “How do we want that group or state to change its conduct, and how would we expect it to change before treating it as a legitimate actor (or removing sanctions on it)?”  If the answer is that there is nothing it could do to be treated normally (the Israeli government’s posture toward Hamas, for example), then a further question is how such a policy is justifiable given that it kills any incentive for the group or state in question to change at all.

A further problem with how the terrorism label has been used is that it ignores other forms of political violence that, as a matter of morality as well as foreign policy consequences, can be at least as damaging as terrorism.  States’ use of overt military force does not meet most official or academic definitions of terrorism but has caused more suffering of innocent civilians than has true terrorism.  We can ask whether the allies’ firebombing of Dresden in the closing months of World War II was justified either morally or pragmatically without ever using the term terrorism.  We can and should ask similar questions today about, for example, Saudi Arabia’s use of force in Yemen and the civilian suffering it has caused, or Israel’s routine use of force against Palestinian civilians in the West Bank.

Senator Gardner’s proposal brings to mind efforts during the Reagan administration in the 1980s to pin on Moscow the blame for every bit of mayhem across the globe.  This included strenuous efforts to associate the Soviet Union with leftist non-state terrorism in Europe.  Those efforts were largely unhelpful in understanding the roots of such terrorism, and they were a distraction from the main issues that Western governments faced in dealing with the USSR.  Today Russia presents an array of challenges, some of which Senator Gardner mentions in his piece, on which Western governments must formulate policy.  Slapping the terrorist label on this array neither clarifies the challenges nor helps governments to arrive at effective policies.

Trump’s odd soft spot for Putin is a twist that was not present in the 1980s.  There is enough smoke here that it behooves the nation to discover what sort of fire is generating it.  Maybe the story is mostly one of Trump trying to protect personal business interests.  Maybe some of the more salacious personal stuff is true.  Maybe the part of the story about Russian involvement in the 2016 election is even worse than what the public has learned already.  The way for Congress to deal with Trump’s odd soft spot is not to try to compensate by reaching for terrorism designations or any other way to force a harder line toward Russia.  A better way is to ensure that Rod Rosenstein and Robert Mueller can continue to do their jobs.