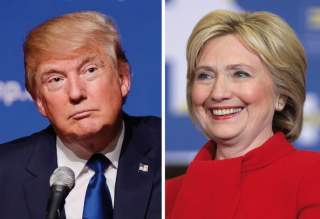 A common observation about the role of foreign policy in the current presidential race is that Donald Trump's candidacy is profiting from a lack of appetite among much of the electorate for continued heavy and costly U.S. involvement in overseas conflict. With Trump having made some remarks that sound critical of that involvement, support for Trump gets interpreted as a rejection of establishment thinking on foreign involvement and of Hillary Clinton's hawkishness (insofar as foreign policy rather than domestic issues might be shaping any voters' sentiments). Some intelligent proponents of a more restrained U.S. foreign policy see hopeful signs in Trump's comments; Ivan Eland does, for example, and just wishes that Trump would “fill in some of the details on his strategic vision for a proper American role in the world.”

There is no denying that Hillary Clinton epitomizes whatever can be described as establishment thinking on foreign policy. There also is no denying her hawkishness, including when comparing her to the incumbent president. Those hoping for more restraint in U.S. foreign policy have reason to be concerned about that and to look for hopeful signs elsewhere. But to look to Trump in this way is a set-up for unpleasant surprises.

Consider some modern history that is relevant to how the pronouncements and postures of American presidential candidates do or do not relate to their policies on war and peace once in office. A winning campaign slogan of Woodrow Wilson in 1916 was “he kept us out of war.” Five months later Wilson asked Congress to declare war on Germany. In the 1940 election campaign Franklin Roosevelt promised that he would “not send American boys into any foreign wars.” Thirteen months after winning the election, Roosevelt asked Congress to declare war on Japan. Roosevelt had not been especially regarded as a peace candidate, but it is worth noting that Republican nominee Wendell Willkie criticized Roosevelt for not adequately preparing the country for war and had been more strongly in favor of supporting Britain in the European war that was already under way than were other GOP presidential hopefuls such as Robert Taft and Thomas Dewey.

A central theme of the 1964 presidential campaign was that Barry Goldwater was the warmonger in the race. The Lyndon Johnson campaign's effective use of tactics that scared people about the prospect of Goldwater's finger on the nuclear trigger helped to produce Johnson's landslide victory. Less than a year after the election, Johnson began the escalation in Vietnam that would lead to 58,000 American deaths. In the 2000 election, George W. Bush disavowed large nation-building exercises and gave no hint of any inclination that he would take the United States into another war. A couple of years later he launched the first major U.S. offensive war in over a century.

Several reasons account for the glaring discrepancies between the campaign postures and the later decisions about going to war. One is that stuff happens. Some stuff (unrestricted German submarine warfare; a Japanese attack on Pearl Harbor) can reasonably call for an armed response. Other stuff (9/11) might be used in a more contrived way to build public support for an unrelated agenda.

Presidential neuroses and responses based on gut feelings and emotions can have a larger impact on presidential policies than anything involving statements made during a campaign. Much of Wilson's policies, concerning his handling of the peace at least as much as taking the country to war, can be explained in terms of Wilson's neuroses. And George W. Bush's need to match or exceed the impact in foreign affairs of his father, who had presided over a successful end to the Cold War, is not just pop psychology.

Other reasons have to do with how most of the electorate responds, often primitively and from the gut, to what the public thinks a candidate represents, rather than taking a more carefully reasoned approach toward what policies a particular candidate is most likely to follow when in office. Votes cast as an expression of dissatisfaction with the status quo are counterproductive when they lead to policies that only make the sources of dissatisfaction even worse. This happens all the time on domestic policy, with unhappy voters dissatisfied with stagnant wages and a sluggish economy voting for legislators who oppose the very sort of demand-stimulating measures that would be needed to energize the economy. We should not be surprised when something similar happens on foreign policy. Campaigns waged in terms of slogans and slurs rather than in terms of strategy and specifics only encourage such non-thinking responses by the electorate.

With Donald Trump, and with the political habits that engendered his gaining the Republican nomination, these reasons for discrepancy between campaign hopes and in-office performance are present in abundance. Trump illustrates splendidly the clinical definition of the personality disorder known as narcissism. The most persuasive future explanations of the foreign policies of a Trump presidency, including decisions on war and peace, probably would be based in large part on presidential neuroses. Hillary Clinton's speechwriters have a valid point when noting, in their candidate's convention acceptance speech, that giving “a man you can bait with a tweet” the powers of the presidency has grim implications for the conduct of foreign and security policy.

The nonspecific, ever-changing, and often self-contradictory pronouncements by Trump give little basis for a voter to reason out what a President Trump's foreign and security policies would be even if the voter wanted to apply such a careful process to his or her decision and tried hard to apply such a process. To speak of “Donald Trump” and “strategic vision” in the same sentence is oxymoronic. Even when Trump has stuck to a teleprompter and a script in talking about foreign policy, the product has been a largely vision-free string of slogans.

The sources of—not to put too fine a point on it—the dumb way a substantial portion of the electorate is currently approaching issues of war and peace and what this implies regarding how they should cast their votes go well beyond Donald Trump. Max Boot speaks directly and bluntly to this subject in an op-ed in which he discusses how the Republican Party has become the “stupid party” in fact and not just as an act to appeal to the poorly educated whom Donald Trump has said he loves. Boot correctly observes, “Mr. Trump is as much a symptom as a cause of the party's anti-intellectual drift.”

Boot is one of those neoconservatives who has been tearing his hair out over Trump's rise because of the hints Trump has dropped that he might actually favor some restraint in foreign policy and because his nomination marks at least a partial loss of the lock that neocons have had in recent years on Republican Party foreign policy. Obviously Boot believes that making the anti-intellectual party more intellectual would mean hewing to the intellectual line of, to quote from his piece, “conservative think tanks like the American Enterprise Institute and the Heritage Foundation and publications like The Wall Street Journal editorial page and Commentary.” But Republican anti-intellectualism is at least as much a rejection of sound and distinctly non-neocon reasoning regarding the need for a more restrained U.S. foreign and security policy. It is even more a rejection of that reasoning rather than of neocon thinking, given the conclusions that should follow from careful consideration of what has and hasn't worked in U.S. foreign policy in recent decades.

Mention of the neocons leads to a final observation about the way in which dissatisfied American voters are reacting to the Trump phenomenon. The inexcusable failure to plan better for what would follow in Iraq after the forceful overthrow of Saddam Hussein reflects how that neoconservative endeavor was based on the Jerry Rubin strategy of tearing things down and grooving on the rubble. So confident were the neocons in the power and appeal of the democratic and free-market values they were attempting to inject into the Middle East that they were sure whatever fell into place after Saddam's overthrow was bound to be better than what was there before. Today the people—including those on the anti-interventionist left and the libertarian right—who would like to tear down a militarist “establishment” or “blob” that has dominated American foreign-policy thinking and who see Trump as a vehicle for such destruction risk making a similar mistake.