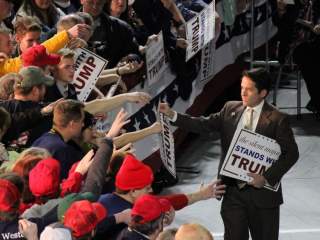 The Donald Trump phenomenon and the suddenly frantic efforts within the Republican Party to try to stop Trump have led some observers to believe American politics are at a major inflection point, one where a familiar line-up of political parties and their backers could be substantially revised. Even some commentators who generally support the Republican Party are talking seriously about the possibility of the party breaking up. There is some valid basis for such talk, given that this party has come to embrace positions and interests that have no business sticking together. The political coalition has more or less worked, but it has not rested on substantive logic. So a destabilizing iconoclast with just enough political cleverness, as Trump has, can expose the artificiality of it rather easily.

Foreign policy is not the main front on which the exposure is taking place, but it may be among the first places where exposure becomes too obvious to ignore. Neoconservatives, whose realization of their earlier plans, culminating in the launching of a major offensive war in the Middle East, was made possible by infiltrating the foreign policy of a Republican administration, already are looking for a new home. That process may accelerate if Marco Rubio loses the Florida primary. The fragility of this part of what has been the Republican coalition is demonstrated by how little Trump has had to do to cause the neoconservative alarm bells to sound. He has not even advanced a coherent alternative foreign policy to shoot down. All he has done is to stray slightly from neoconservative orthodoxy: pointing out that the Iraq War was a big mistake and—even though Trump declares himself to be a strong supporter of Israel—committing the sin of suggesting that impartiality would be advisable in a U.S. attempt to help to resolve the Israeli-Palestinian conflict.

An even bigger disjunction represented by the Republican Party is between the economic interests of a wealthy elite and the fears, xenophobia, and social-issue fixations of the hoi polloi whose votes the elite relies on to put its preferred economic policies in place. Not only is there no logical, substantive connection between these two aspects of what has come to be the Republican agenda; the economic policies are contrary to the interests of most of the ordinary citizens who are casting the votes. In an era of secular stagnation with insufficient demand, many of those voters would be better off with fiscal policies different from what typically has been in the Republican agenda. The basic divide underlying this part of the Republican disjunction is between the one percent that provides the money to political candidates and that portion of the 99 percent that is the target of the campaigns that this money finances and who have been voting for those candidates. Trump, by not being beholden to the donors of money and making a big deal out of the fact that he is not, has been well placed to start tearing down some of the curtains that have covered this divide within the party.

The extraordinary political turmoil we are witnessing is not, as some of the stop-Trump activists would like us to believe, a contest of Donald Trump versus the Republican Party. Trump's candidacy has functioned as a catalyst, but the energy for the turmoil ultimately comes from collision of matter and antimatter that have been the different elements of the Republican coalition. That this is more about the party itself than about Donald Trump is reflected in how it has only been very recently that many within the party have started excoriating Trump, with most of those same people not having seen fit to do so earlier. The same Mitt Romney who made an anti-Trump speech this week was delighted to have Trump's endorsement in 2012. In the current campaign, it was only a few debates ago that some candidates (most notably Ted Cruz) were treating Trump with respect because they hoped to get his backers when his campaign finally failed. It was only after it became apparent that the campaign was not failing that the excoriation began in earnest and the race to the bottom reached the gutter that the contest for the Republican nomination is now in.

Fareed Zakaria sums up well what has been going on here: “Republicans have fed the country ideas about decline, betrayal and treason. They have encouraged the forces of anti-intellectualism, obstructionism and populism. They have flirted with bigotry and racism. Trump merely chose to unashamedly embrace all of it, saying plainly what they were hinting at for years. In doing so, he hit a jackpot.”

Robert Kagan, although he is one of the named targets of Zakaria's criticism (for having downplayed the anti-intellectualism that Sarah Palin represented in the 2012 campaign), is, now that he is one of the first of the neoconservative fraternity to jump ship, at least as blunt in describing how Trump is not hijacking the Republican Party but instead is “the party’s creation, its Frankenstein’s monster, brought to life by the party, fed by the party and now made strong enough to destroy its maker.” Kagan asks, “Was it not the party’s wild obstructionism — the repeated threats to shut down the government over policy and legislative disagreements, the persistent calls for nullification of Supreme Court decisions, the insistence that compromise was betrayal, the internal coups against party leaders who refused to join the general demolition — that taught Republican voters that government, institutions, political traditions, party leadership and even parties themselves were things to be overthrown, evaded, ignored, insulted, laughed at?” That is in addition to what Kagan describes as “the party’s accommodation to and exploitation of the bigotry in its ranks” and “the Obama hatred, a racially tinged derangement syndrome” that has portrayed the president as “not only wrong but also anti-American, un-American, non-American.”

The ingredients would seem to be in place for a major transformation of American politics and the American party system, perhaps equivalent to the Republican Party's own displacement of the Whigs in the 1850s. But several other factors are likely to prevent that from happening.

One is the constitutional structure and electoral system in the United States, with an executive led by a strong president and a first-past-the-post method of electing members of Congress. In some other advanced democracies, perhaps with a parliamentary system and elections that use party lists and proportional representation, a crisis as severe as the one currently afflicting the Republican Party would very likely lead to the party's break-up and the formation of new parties and new coalitions—somewhat like what happened to Italy's Christian Democrats in the mid-1990s. But in the United States the electoral mechanics are stacked against even an ad hoc third party candidacy.

Another factor is that with the deepened and intensified partisanship in American politics, party identification has increasingly become for many people a major part of self-identification. It is a cultural thing as much as a political or economic thing. This pattern is sustained not only by what political parties themselves say and do but also by ideologically defined talk radio and other self-selected media exposure. Despite the fact that party membership in the United States is in many respects a very loosely defined status—most Americans do not carry a party membership card in their wallets—viewing oneself as a conservative or liberal or Republican or Democrat is for many as much a part of self-identification as religion or ethnicity is for people in many other countries.

A very important factor in sustaining the Republican coalition has been, to be blunt, how poorly most citizens understand important issues. Donald Trump may be the only candidate who openly acknowledges how much he loves having voters who are poorly educated, but he is hardly the only one to rely heavily on the thought processes, such as they are, of that demographic. Most voters do not understand Keynesian economics, and the Republican establishment relies on the fact that they don't. Neither do most voters, who may have heard enough to get a sense of how dysfunctional Washington and especially the U.S. Congress have been in recent years, follow the legislative process closely enough to attribute the dysfunction to a particular political party engaging in what Kagan calls “wild obstructionism.” One can say all one wants about which party a segment of the population ought to support as being in that segment's best interests, but what matters politically is what those citizens believe, or misbelieve.

Accentuating all of this is how much beliefs among the American public that are relevant to public policy—even purely factual beliefs about what is, and not just what ought to be done—have become corollaries of party identification. This is basically a tribal phenomenon, in which people believe certain things because the elders of the tribe to which they belong tell them to believe those things. In the United States many beliefs are held largely because elders (i.e., politicians, assisted by the priests of talk radio) in the tribe (i.e., political party) with which a citizen identifies say it is so. A vicious and self-referential circle is sustained, in which political parties are able to hold on to most of their followers even amid a party crisis because the parties inculcate beliefs that lead the followers to view that party, rightly or wrongly, as being in their best interests. In a post-Citizens United world this has become all the more true with respect to the ability of monied interests to buy the ads and finance the campaigns that sustain the beliefs.