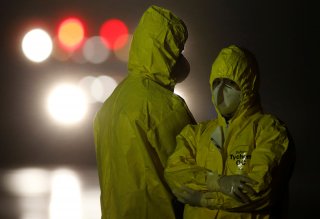 Donald Trump’s disdain for the U.S. intelligence community has been much in evidence ever since his first full day in office when he used the solemn setting of the CIA’s memorial to fallen officers to attack the press and brag about the size of his inauguration crowd. Reminders of that disdain have included his public siding with the president of Russia against the conclusions of his own intelligence agencies regarding Russian election interference. A more recent reminder is press reporting that frequent warnings about the coronavirus that appeared in Trump’s daily intelligence briefings throughout January and February didn’t sink in because Trump simply doesn’t bother to pay much attention to those briefings.

The purge of intelligence professionals and installation of Trump loyalists who are otherwise unqualified for the senior positions they have been given at the Office of the Director of National Intelligence are part of the same pattern. Clearly, Trump does not look to U.S. intelligence to perform its proper function of providing objective facts and analysis about overseas events. He instead sees it as just one more element of government to be pressed into supporting his own assertions.

It thus is unsurprising that now, as Trump is endeavoring to deflect attention from his own performance during the coronavirus pandemic and to direct blame elsewhere—including at China—he is trying to make intelligence part of that effort. The New York Times reports that senior administration officials “have pushed American spy agencies to hunt for evidence to support an unsubstantiated theory that a government laboratory in Wuhan, China, was the origin of the coronavirus outbreak.”

The origins of the pandemic, including the possible involvement of that Chinese lab, are legitimate targets for reporting and analysis by U.S. intelligence, and the reported push may seem at first glance to be legitimate as well. But there is a big difference between calling for a concerted effort to find the most accurate possible answer to a question (“How did the outbreak begin?”) and calling for material to support one possible answer to the question (“Give us everything you can that would suggest the Wuhan lab was the origin”). As with any other situation that starts with a conclusion and tries to find support for it, the latter approach involves bias.

Intelligence agencies will never have the resources to investigate endlessly every possible answer to all of the important questions that come their way. In an unpoliticized environment, they will focus their collection and analytical capabilities in the directions that, based on logic and whatever early information they have, are the most promising avenues for getting at the truth. They will refine and revise their priorities as some investigative avenues bear fruit and others turn out to be dead ends.

When senior members of the incumbent administration exert pressure regarding a specific topic, that immediately moves to the top of the agencies’ priority list. So concentrated work surely is taking place now to dig up any scrap that might suggest the Wuhan lab was the source of the virus. Almost certainly some such scraps will be found—not necessarily because they get closer to the truth than alternative possibilities about the origin of the pandemic, but simply because that’s where the most concentrated digging took place.

The intelligence agencies may, amid continued uncertainties, remain agnostic about the question of the pandemic’s origin. An intelligence community statement indicates they are agnostic now, unlike Trump’s contrary assertion that he has a “high degree of confidence” the virus came from the Wuhan lab. Meanwhile, the agencies will have delivered the scraps to the White House, which can freely and selectively use them publicly to support the favored hypothesis while ignoring any information that might point in a different direction.

The administration has already displayed, in other aspects of the coronavirus pandemic, a proclivity for running with fragmentary, scrap-like information when pushing a favored hypothesis. This was true of the supposed curative effects of hydroxychloroquine, until Trump and his co-promoters at Fox News quietly dropped their promotion when too much information came to light showing that this was a medical dead end.

The pressure being exerted on the intelligence agencies about the Wuhan lab is reminiscent of pressures that earlier administrations exerted to hunt for material in support of their favored hypotheses, including hypotheses used to sell wars. One such episode was the Gulf of Tonkin incident in 1964, in which the Johnson administration promoted the idea of a second, open-ocean attack by North Vietnam on U.S. warships—an attack which almost certainly never occurred—as a basis for mustering public support for what became the Vietnam War. The push, not for the truth, but for material to support the administration’s hypothesis was made explicit in a directive sent out to military units in the area: “An urgent requirement exists for proof and evidence of the second attack by DRV [North Vietnam] naval units . . . Material must be of a type which will convince United Nations Organization that the attack did in fact occur.”

Also, similar was the push to sell the offensive war in Iraq by the George W. Bush administration, which pressed the intelligence agencies again and again for anything they could find that might suggest an alliance between the Iraqi regime and Al Qaeda. The administration used the resulting scraps to spin a tale of such an alliance—contrary both to the truth and to the intelligence agencies’ own conclusions.

The current biased pressure about the coronavirus and the Wuhan lab has multiple costs. It is likely to impede public understanding of what is known and unknown about the origins of the pandemic. It is an additional needless complication in U.S. relations with China, especially if the hypothesis about the lab’s role turns out to be wrong. It also undermines the important role the intelligence agencies play in national security—in the short term by distorting the allocation of intelligence resources, and in the longer term by ensnaring the agencies in a politicized blame-deflecting effort.