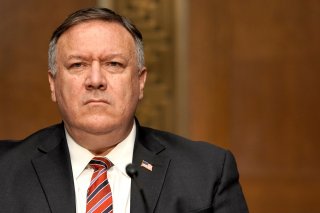 The Commission on Unalienable Rights released a mostly unexceptional report last week. It is partly a historical review of how human rights have been regarded in the United States and partly an extended riff on the Universal Declaration of Human Rights (UDHR) that the United Nations adopted in 1948. It offers some very general observations about how human rights must mesh with larger national objectives in foreign policy. The commission was not called on to break new ground, and it didn’t.

The report contains some conspicuous insertions, however, that appears to be there because the man who appointed the commission, Secretary of State Mike Pompeo, wanted them there for his own political and personal reasons. Some of those insertions set up rhetorical lines of attack that Pompeo exhibited in a combative speech he gave at the event in Philadelphia marking the release of the report. Some are clearly consistent with Pompeo’s preferences and beliefs but inconsistent with the reasonable analysis and observations found elsewhere in the report. The report colors human rights with a nationalist brush, all but describing the Declaration of Independence as a first draft of what would become the UDHR. Although there certainly are major substantive and moral links between the principles the Founding Fathers espoused and what is widely seen in modern times as human rights, this American exceptionalist approach seems strained. It sets up Pompeo’s waging of the Trump administration’s culture war. Pompeo, invoking President Trump’s Mount Rushmore speech, said in his own speech, “Today, the very core of what it means to be an American, indeed the American way of life itself, is under attack. Instead of seeking to improve America, too many leading voices promulgate hatred of our founding principles.”

The report includes much discussion about how slavery was a huge exception to early American respect for human rights. One wonders what the commissioners were thinking when they heard Pompeo, still in political attack mode, exclaim, “The rioters pulling down statues thus see nothing wrong with desecrating monuments to those who fought for our unalienable rights—from our founding to the present day.” Most of the statues currently at issue are, of course, of Confederate figures who waged a rebellion against the United States and in defense of slavery.

The report offers a strained defense, ostensibly in the name of upholding U.S. “sovereignty,” of the United States not participating in several international treaties and international organizations concerned with human rights. The story regarding the treaties is an old one, mostly involving Republican opposition in the Senate. On participation in the relevant international organizations, the commission is carrying water for the Trump administration, which withdrew from the United Nations Human Rights Council two years ago. Participation in multilateral human-rights efforts is not a compromise of sovereignty; it is an exercise of sovereignty on behalf of human rights. Shortcomings of bodies such as the UN council are not a reason for any country serious about living up to human-rights principles not to participate.

Another insertion that obtrudes in what otherwise would be a reasonable argument is the report’s assertion that social and economic rights are least compatible with “American founding principles” when they “induce dependence on the state.” That’s a welcome line to anyone in the anti-government political Right. It is hard to see how it belongs in what is supposed to be a discussion of broadly applicable unalienable rights.

Another insertion in the report has the same sort of parochial political appeal and is flatly inconsistent with the report’s correct characterization of the UDHR as a comprehensive statement that does not prioritize among different rights. The report does prioritize, stating, “Foremost among the unalienable rights that government is established to secure, from the founders’ point of view, are property rights and religious liberty.”

As purported history concerning the Founding Fathers’ attitudes, this statement is partly correct but badly outdated, and partly incorrect. The founders did have a bias toward property, so much so that voting rights in the early years of the republic were enjoyed only by white male landowners. It took decades to make the franchise more universal, and not a function of property ownership, race, or sex. Surely this is one part of the Founding Fathers’ world—along with their practices regarding human property, meaning slavery—that ought not to define conceptions of human rights today.

The part of the statement about religion is historically incorrect. The United States was founded during a secular-minded era between the first and second of the Great Awakenings, the periods of religious fervor in America. The report’s assertion that the thinking of Thomas Jefferson and James Madison proceeded “from a theistic premise about the sources of human dignity” is false.  Jefferson was not a theist but instead a deist—someone for whom reason and nature could point to the existence of a creator but who had little use for revealed religion.

It is no accident that the Constitution does not mention God. Its only mention of religion is in the First Amendment’s establishment clause, which reads, “Congress shall make no law respecting an establishment of religion, or prohibiting the free exercise thereof.” The clause is about keeping government out of religion, not putting the government into it. A quotation from Madison that the commission misleadingly cites as evidence of religion being a driver of the Founding Fathers’ thinking was instead his defense of the no-establishment principle.

Regardless of historical inaccuracy, why should property ownership and religion be given higher status over other rights? If one is to start prioritizing rights, then surely the first priority ought to be given to the basics of life and liberty. If priorities go farther than that, then it would make more sense to turn next to the political rights of participating in a representative democracy, which do the most to determine whether people enjoy any human rights at all.

The emphasis on religion clearly reflects the personal beliefs of Pompeo, an evangelical Christian who appears to have few qualms about letting religious doctrine influence his performance of official duties, including in ways that could spell harm to peace and to U.S. interests. But that performance is highly selective and inconsistent when it comes to preserving religious freedom.

No principle of religious freedom would explain the Trump administration’s turn-a-blind-eye support for Saudi Arabia, where the open practice of any religion other than the state religion of Islam is banned. It would not explain the unswerving support for the government of Israel, which does not have such a ban but does have an established religion that affects in numerous ways the rights of citizenship. Even a Jew cannot marry in Israel unless it is to another Jew and only then in a religious ceremony led by an Orthodox rabbi.

Foreigners will look on the commission report and Pompeo’s rhetoric with skepticism as self-serving exercises. They will look skeptically at the inconsistent respect for human rights in U.S. foreign policy.

Additionally, foreign observers will look critically at the extent to which the United States respects human rights for its own citizens. The commission in its report appropriately observes that “a crucial way in which the United States promotes human rights abroad is by serving as an example of a rights-respecting society” at home. Foreigners’ observations undoubtedly will focus on the ways in which the United States respects democratic political rights only incompletely, and in which the flaws in American democracy are worsening with ever greater efforts to suppress the exercise of the right to vote. Also noticed will be the Trump administration’s attacks on a free press—in his Philadelphia speech, Pompeo attacked the New York Times’s 1619 Project about the history of slavery in America.

Foreign observers also can’t help but notice that in the same week as release of the commission’s report, the administration escalated its culture war to the point that militarized federal agents, in unmarked vehicles and anonymous uniforms, were pulling nonviolent protestors off the streets of Portland, Oregon. Until now, that type of tactic was associated only with some of the world’s most abusive authoritarian regimes.

Columnist Tom Friedman writes that Trump has taken a page from the “Middle East Dictator’s Official Handbook,” likening Trump’s strategy to that of Syrian president Bashar al-Assad. Perhaps an even better comparison is with a Middle Eastern dictator whom the Trump administration likes: Egypt’s Abdel Fattah el-Sisi, whose head-cracking tactics have primarily been aimed at the Muslim Brotherhood but is increasingly using religion and Egypt’s religious establishment to defend those tactics.