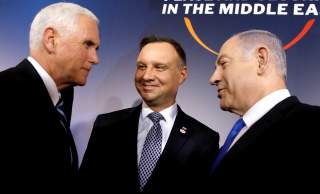 The Trump administration tried to make this week’s Middle East conference in Warsaw what the administration had intended it to be all along: an Iran-bashing exercise that would get Europeans to join in more of the bashing. But the conference instead became what most European governments—whose attendance at the gathering was spotty and often low-level—warned it would be: a demonstration not of U.S.-European unity on policy toward Iran but instead of disunity. That the conference’s final statement makes no mention of Iran has to be a major disappointment for the administration.

In its obsessive campaign of stoking maximum hostility toward Iran, the Trump administration is isolated except for partnering with Iran’s regional rivals, which means Israel, Saudi Arabia, and the United Arab Emirates. These regimes have their own reasons for keeping Iran a pariah—reasons that are distinct from U.S. interests and distinct from any fondness for peace and stability in the Middle East. These three states are responsible for much of the uninvited extraterritorial use of military force —apart from Saddam Hussein’s two offensive wars, the United States’s offensive war in Iraq and other interventions, and Turkey’s intervention in northern Syria—as well as more irregular methods of destabilizing other countries in the Middle East over the past forty years.

Israeli prime minister Benjamin Netanyahu can be considered a winner at Warsaw for using the conference to show he can rub elbows with Arab leaders. It was after a side meeting with the Omani foreign minister that Netanyahu commented in a Hebrew-language interview about Israel and Arab states sharing a “common interest of war with Iran.” Netanyahu’s office later altered its English translation to suggest that he intended only a metaphorical meaning of “war.” Regardless of the translation issue, Netanyahu’s government has escalated its already intense anti-Iran rhetoric, as it did in recently acknowledging for the first time its repeated airstrikes in Syria.

Netanyahu’s government highly values any overt dealings with Arab governments as demonstrating that it does not need to end the occupation of Palestinian territory to conduct worthwhile business with regional neighbors. The Trump administration is pointing to such dealings in claiming a success at Warsaw. Deflecting international pressure to end the occupation pervades almost all Israeli diplomacy and includes an East European dimension. Offsetting West European opposition to the occupation is the main reason for Netanyahu cozying up to the Hungarian regime of Viktor Orban, notwithstanding Orban’s authoritarianism and habit of blaming George Soros for anything bad in Hungary.

The Warsaw conference leaves the world with the same old stuff regarding the campaign of maximum hostility toward Iran and the Trump administration’s lining up behind a few regional rivals of Iran even when this means lining up against the rest of the world. But despite this relative isolation and the small ball the administration is playing on this issue, it still speaks as if the United States can dictate what the rest of the world should do. This tone pervaded Vice President Mike Pence’s speech at the conference, in which his complaints about European governments not being “cooperative” with U.S. sanctions sounded like a schoolmarm scolding pupils for evading discipline. Unstated in the speech is that the United States—not the Europeans, and not Iran—is in blatant violation not only of the Joint Comprehensive Plan of Action (aka the Iran nuclear deal) but of the unanimously-enacted United Nations Security Council Resolution 2231, which is the international community’s endorsement of the JCPOA. Pence was calling on European governments to violate their own obligations and to show as much contempt for the Security Council as the Trump administration does.

Pence also had harsh words about the recently established “special purpose vehicle,” a kind of barter clearing house that the Europeans hope will enable at least humanitarian goods to be sold to Iran while staying outside the formal banking system and beyond the reach of U.S. sanctions. The new mechanism probably will have for now only marginal effect on commerce with Iran, but it has larger significance for long-term U.S. interests. It is one more indication of how a world increasingly fed up with how the United States pursues narrow political objectives by exploiting its economic advantages—with the U.S. dollar being the principal reserve currency and New York being at the center of international finance—is finding ways to overcome or negate those advantages. If the isolated superpower keeps trying to do the sort of things it is doing on Iran, it will see its super powers diminish more rapidly and, in the future, will become less able to impose its will on many issues that have nothing to do with Iran.