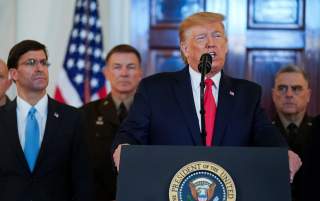 President Donald Trump, in his speech following the Iranian missile strikes on Iraqi territory where U.S. troops were present, missed a de-escalation opportunity that Iran had given him.  A confrontation that benefits neither the United States nor Iran (not to mention other affected parties like Iraq) is momentarily pausing but the confrontation and its accompanying dangers will continue.

The Iranian regime sent a carefully calibrated message with its missile strikes on two military bases in Iraq yesterday and with its subsequent messaging. The strikes were a prompt, highly visible, and openly proclaimed retaliation for the killing by a U.S. drone of senior Iranian military leader Maj. Gen. Qassim Suleimani. They responded to the internal Iranian demand for revenge and to the external need to “establish deterrence,” to use that overused Western term.  Related to the latter point, the Iranians demonstrated again—as they did in striking Saudi oil facilities last year—the ability to attack targets in neighboring countries with high precision.

They used that precision in this instance to hit targets that are associated with the United States, that they could rhetorically link to the assassination of Soleimani, but that would not indiscriminately cause American casualties—and, as it appears, did not cause any American casualties at all.  In other words, the Iranians did not force Trump into a situation in which he would feel obliged to strike militarily at Iran again. With the Iranian leadership’s follow-up statements about having “concluded” the response to the Suleimani while threatening to respond forcefully to any more U.S. escalation, Tehran’s message to the Trump administration was clear: we are prepared to climb down the escalation ladder but we are also prepared to hit back hard if you keep climbing up the ladder. Basically, Tehran offered Trump an off-ramp from the current dangerous confrontation.

The good news in Trump’s response is that he evidently has taken the no-casualty result of the Iranian missile strikes in Iraq as a reason not to order, at least for now, yet another military attack on Iranian interests. But there was no hint in his speech of recognition that it was his own launching of unrestricted economic warfare against Iran that set up the ladder in the first place.  He gave no indication of understanding that Iran is not going to sit still indefinitely while that warfare continues unabated. Rather than talking de-escalation, Trump imposed additional sanctions (as if there is much left to sanction in Iran).

The Iranians have said that if they can’t export their oil (and current U.S. policy is to do everything possible to reduce those exports to zero), then other oil producers should have difficulty exporting their product as well. Sending that message was largely what the attacks on the Saudi facilities at Khurais and Abqaiq were about. If the U.S. administration persists on its present course, then expect more of the same.

Trump’s few conciliatory words near the end of his statement were insufficient to offset the tone and substance of everything else in his speech. Those few words included the truthful observation that ISIS is a foe of Iran (however much this observation jars with much else that Trump said about Suleimani as supposedly the world’s chief terrorist) and that there is potential for the United States and Iran to cooperate in fighting ISIS as they tacitly have done in the past in Iraq.  But up until that point, the speech was all-too-familiar Trumpian rhetoric, including the usual outright falsehoods such as that Iran is seeking a nuclear weapon. (It isn’t although continued assaults from the United States may lead it to change its mind.) Another Trump-favorite falsehood is that the multilateral agreement that restricts Iran’s nuclear program will expire soon. (It won’t; the agreement itself, the prohibition on nuclear weapons, and the intrusive international inspection arrangements, are permanent). Then there were the hoary and fallacious assertions about the financial side of the Iran nuclear agreement, including even the outrageous charge that money the previous U.S. administration had provided Iran “paid for” the missiles fired at the Iraqi bases.

Given one of the most important opportunities of his presidency to exercise statesmanship, Trump turned the occasion mostly into the functional equivalent of a campaign rally.  Because of that, a dangerous and fruitless standoff will persist.