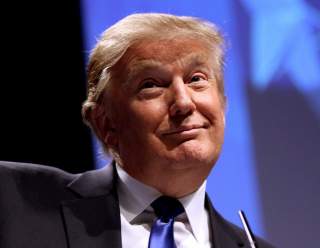 An indication of how far removed most of the current presidential campaign has been from intelligent and useful debate on important public issues is the speech on foreign policy that Donald Trump gave in Washington on Wednesday. It is such an indication because the speech was supposed to meet a higher standard: to be one of a series of serious statements by the candidate that would describe the direction of a Trump administration, in contrast to the bombast and invective that have been salient characteristics of this particular candidate's campaign so far. The difference between this speech and the rest of the campaign, however, was more one of style than of substance. Trump stuck to his script, competently using a teleprompter and hardly saying a word more than what was in the prepared text. There were no vulgarities or personal insults in this Trump appearance.

The general policy direction laid out was so general and vague as to be platitudinous, expressed in such phrases as “America first” (evidently with no intent to associate with the earlier isolationist use of that term) and that the United States should always endeavor to “win.” He called, again in general terms, for a coherent foreign policy, but the speech itself did not constitute such a policy. The specifics, such as they were, differed little from what has been heard in bits and pieces from Trump earlier. Rambling at times, the speech was more in the nature of a series of bumper stickers, with well-tested applause lines printed on them, that had been stitched together.

The speech exemplified some unfortunate attributes of campaign rhetoric for which audiences have shown a depressingly large tolerance. There is no reason for Trump and his advisers to correct such attributes now, given that such faults have not kept him from getting where he is now, on the verge of clinching his party's nomination.

There are, perhaps most obviously, blatant contradictions and inconsistencies. In this speech, for example, Trump described earlier Cold War years as a sort of golden age of American foreign policy but also disavowed participation in the type of international institutions that were a major and even indispensable part of U.S. policy during those years. He called for beefing up the U.S. nuclear arsenal and more spending on U.S weapons generally but also stated that a major problem in the world is that there are too many weapons. He complained that our friends cannot count on us, but also spoke about how they should rely more on their own resources rather than on the U.S. to defend themselves. He spoke about finding common ground with adversaries and turning them into partners, but while applying this thought to Russia and to some extent to China he took the exact opposite tack regarding Iran. And so forth.

There also are flights from factual reality—or in other words, making things up. Trump declared, for example, that Iran has “ignored” the terms of the recent nuclear agreement, a statement that bears no resemblance to the record so far of Iranian compliance with those terms. He labeled Israel as the “one true democracy” in the Middle East, ignoring the lack of political rights of a substantial population under Israeli control and making it less of a democracy than, say, Tunisia. He declared that President Obama's policies “unleashed” ISIS, which rewrites the history in which this group arose as a direct result of the previous U.S. administration's invasion of Iraq, and in which the group received a further boost when a civil war, not started by any U.S. administration, broke out in Syria. He also blamed the North Korean nuclear problem on Obama, ignoring the history in which that country's big progress toward a bomb occurred after the Bush administration effectively junked an agreement that had been reached with North Korea under the Clinton administration. He declared any reference to an inflammatory video in Libya as a “total lie,” whereas in fact there was such a video and it had a substantial effect in stoking popular furor that extremists in that country exploited. And so forth.

Another common pattern has been excoriation of an incumbent while saying and recommending many of the same things that the incumbent is saying and doing. There was plenty of both—excoriating Obama while imitating him—in this speech. Trump's hopeful remarks about relations with Russia sounded a lot like the Obama administration's “reset” of that relationship. Trump's call to upgrade the U.S. nuclear arsenal sounded a lot like the nuclear modernization program on which the Obama administration already—to the chagrin of many Democrats—has embarked. Trump's comments about allies not paying their fair share was a paraphrase of what Obama has said about free riders. A call by Trump for “restraint” in dealing with conflicts overseas sounded a lot like the approach the Obama administration is taking in Syria. Trump also made a big point about how opposed he supposedly was to the Iraq War, once again ignoring that Barack Obama was more clearly and earlier on the right side of that issue than Trump was.

There is a lot of what can best be described as emoting, without any serious effort to make it a real debate about policy. One familiar example in this speech was the criticism of both Obama and Hillary Clinton for not “naming the enemy” of radical Islam. Once again nothing was said about what the likely practical effects of a particular choice of words on this subject would be. Nor was there the slightest evidence introduced that the president and former secretary of state do not understand at least as well as their political opponents the nature of this particular enemy, however more careful they are in their public choice of words.

And there was also the pattern of making promises about obtaining results without giving the slightest idea of how those results would be attained. Probably the clearest example of this in Trump's speech was his declaration that ISIS “will be gone quickly” if he were to become president. He didn't say “where” or “when” he would so something—or even what he would do—to bring about this happy result, or how anything he would do would be any different from what is being done now. “We have to be unpredictable,” Trump said. Evidently a U.S. president has to be unpredictable to the American people and not just to ISIS.

If the purpose of Trump's appearance this week was to check a box for “a major foreign policy speech” without straying far from the sort of slogans that in even more disjointed form have gotten Trump to where he is today, then the speech served that purpose. But it left us without a clear idea of what the foreign policy of an administration headed by this intentionally unpredictable would-be president really would look like.

The deficiencies go beyond Trump himself. Some of the patterns mentioned above have been visible in some form in American political rhetoric for a long time. Trump's most visible contributions may have been the insults and vulgarities. Much of the rest already was there. The contest for the GOP nomination, which much of the time has resembled the Jerry Springer Show more than a serious debate about public policy, has ripened what was there. And Trump has exploited the mess.