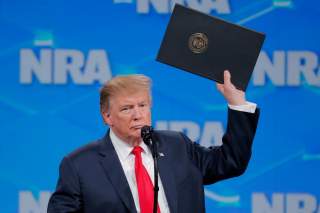 Damage to U.S. security interests that is likely to linger well beyond the term of Donald Trump includes major setbacks to arms control. Several characteristics of the current administration’s way of operating are contributing to this result. One is the priority the president gives to embellishing his self-styled image as a dealmaker, as distinct from achieving practical results. Related to that is a penchant for disparaging or destroying accomplishments of previous administrations rather than building on them. Add to that a short attention span, a preference for grand gestures over long-term diplomatic work, and an urge to throw bones to the president’s domestic political base regardless of the overseas consequences. A further complication is the president’s vulnerability to the manipulation of his advisors who have ideas that are firmer than, and agendas that are different from, his own. This is especially true of National Security Advisor John Bolton, who seems never to have met an arms control agreement that he liked or a war that he didn’t like. The overall negative impact on arms control makes the world, and Americans, less safe than they otherwise would be.

The administration’s handling of the North Korean nuclear problem illustrates some of these characteristics, even though Trump cannot be faulted for failing to come up with a way to crack the very tough nut that his predecessors could not crack either, which is getting Kim Jong-un to give up his nuclear weapons. The “fire and fury” phase of Trump’s handling of the issue was step one in an approach that has sought the grand gesture rather than results that would be meaningful but less spectacular. Escalation to the summit level with inadequate negotiation and preparation at lower levels flew in the face of a long history of what makes for success and failure in arms control. Reaching for the big goal of early North Korean nuclear disarmament when more achievable partial bargains were within reach was another mistake—one that probably reflected Bolton’s influence.

The damage from the failed experience with North Korea consists not only of missed opportunities regarding North Korea itself but also the unhelpful message that Trump’s approach has sent to other arms control interlocutors. The attention, summit-meeting equivalence, and love-letter relationship that Kim has gotten from Trump sends the message that having nukes pays off. As Barbara Slavin observes regarding Iran, “It cannot have escaped the Islamic Republic’s notice that President Trump has seemed far more eager to engage diplomatically with North Korea—which has nuclear weapons—than Iran, which does not.”

The Trump administration’s assault on the Iran nuclear agreement (the Joint Comprehensive Plan of Action, or JCPOA) has been one of its most concentrated and direct efforts to demolish arms control. Several of the factors that underlie other facets of the administration’s foreign policy have driven this assault. One is the urge to destroy a major accomplishment of Trump’s predecessor. Another is the inclination to do the bidding of Iran’s regional rivals, Saudi Arabia and especially Israel, no matter the effects on regional stability or U.S. interests.

Almost a year after the administration reneged on U.S. commitments under the JCPOA, there is no sign of any negotiation of a “better deal.” This result is not surprising, given the damage to U.S. credibility (especially in Iranian eyes) from reneging on the JCPOA, the extreme nature of U.S. demands, and the Iranian record (specifically on nuclear matters) of meeting pressure with resistance rather than capitulation.

The Iranians are trying to outwait Trump, and the JCPOA survives for now because the United States, nor Iran, is the isolated party. But if Iranian patience with a deal from which they are getting almost no economic benefit runs out and the JCPOA collapses (clearly a high-priority goal of Bolton and Secretary of State Mike Pompeo), the direct setback to arms control would be major and obvious. Tehran would not necessarily start building nuclear weapons right away—a move that would reverse a strategic decision that Iranian leaders made years ago—but Foreign Minister Mohammad Javad Zarif recently indicated that withdrawal from the Nuclear Nonproliferation Treaty would be one Iranian option. Moreover, other possible arms control measures involving Iran, such as one to limit ballistic missiles, would have been built on trust and cooperation developed through a successful implementation of the JCPOA. But under the Trump administration’s approach, any such prospects are dead for now.

Another direct setback to arms control is the administration’s killing of the treaty on intermediate-range nuclear forces (INF), which was a landmark arms control achievement of the late Cold War years. One of Russia’s new weapons systems does appear to be a possible violation of the INF treaty, but Russia has similar concerns about the capabilities of a U.S. system deployed in Eastern Europe. A constructive approach to alleged violations would have been not to junk the treaty but instead to press for the fullest possible engagement, explanation, and mutual inspection of suspect hardware. Discarding the INF treaty is especially pointless given that there appears to be no strategic U.S. need for weapons prohibited by the treaty that is not met just as well by other existing systems, including sea-based ones.

The Trump administration is talking an ambitious game about strategic arms control, but its game once again seems to involve discarding the achievements of previous administrations in favor of an impressive-sounding but probably unachievable “better deal.” What should be the highest priority task in strategic arms control at present is achieving an extension of the New START agreement, which is the last surviving U.S.-Russian agreement to limit nuclear arms and will expire in less than two years. Instead, the administration is talking about limiting Russian tactical nuclear weapons and including China in any new agreement. The complexity and history of strategic arms control negotiations strongly suggest that both of these objectives are unachievable before the expiration of New START, even with a U.S. administration more focused and experienced than the current one. Daryl Kimball of the Arms Control Association observes, “If team Trump suggests China must join New START or that Russia must agree to limits on tactical nukes as a condition for its extension, that should be recognized as disingenuous proposals designed to create a pretext for killing New START.”

Trump’s most recent act of disdain for arms control was to withdraw theatrically, during a speech to the National Rifle Association, the U.S. signature from the Arms Trade Treaty, a five-year-old multilateral convention aimed at monitoring the international arms trade and curbing embargo-violating infusions of arms to places of human-rights violations or terrorism. The treaty places no new restrictions on domestic uses of, or trade in, firearms, including in the United States. Nonetheless, the NRA opposed the treaty because that group reflexively opposes anything that even remotely sounds like gun control. Trump’s withdrawal of the U.S. signature demonstrated that for him, international arms control has lower priority than an applause line that appeals to the gun lobby.

Destructive effects that with the capacity to extend beyond Trump’s presidency are a major part of what administration policymakers want. The objective extends as well to other aspects of foreign policy besides arms control. Aaron David Miller and Richard Sokolsky note that the efforts of Bolton and Pompeo to kill the JCPOA once and for all mirror the administration’s emboldening of the Israeli government to create more facts on the ground that will kill once and for all the possibility of a two-state solution to the Israeli-Palestinian conflict.

Several factors ensure that the destructive effects on arms control will endure. One is the political and diplomatic friction that makes it difficult to rebuild from scratch an arms control regime that already has been destroyed. Another is the arms control equivalent of facts on the ground—that is, the deployment of new weapons systems after the breakdown of an earlier agreement. It always is a harder sell to destroy something already bought and put in use than it is to preclude what is only a future possibility. A third factor is the damage to U.S. credibility from Trump’s failure to live up to U.S. commitments in agreements such as the JCPOA. Foreign governments cannot just hope for something different after 2020. They look at the American political system that produced Donald Trump and see that the system is still in place. They realize that something similar could happen again.

The end result is that Americans are less safe now than they otherwise would have been—and will be less safe for years to come.