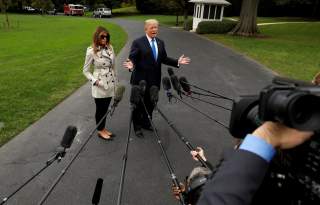 Donald Trump’s speech on Iran is the latest chapter in his struggle to reconcile his overriding impulse to denigrate and destroy any significant achievements of his predecessor with the fact that the most salient of those achievements in foreign policy—the Iran nuclear agreement or Joint Comprehensive Plan of Action (JCPOA)—is working.  It is fulfilling its objective of keeping closed all paths to an Iranian nuclear weapon.  As international inspectors have repeatedly determined, Iran is fulfilling its obligations under the agreement.

The struggle for Trump is more difficult on Iran policy than with the Affordable Care Act, where Trump has been using his own executive actions to destroy directly what he has denigrated.  However painful his actions on health care are to American citizens who are adversely affected, there is no international multilateral agreement that direct destruction violates.  With health care there are no equivalents to the adults, in the person of senior national security officials in his administration, who have been telling him what a bad idea abrogation of the JCPOA would be.

With those adults uncomfortably restraining him, Trump is turning to Congress to square the circle between impulse and reality, to do what the adults are advising him not to do, and to come up with an Iran strategy that is markedly different from what previous administrations have done.  Neither the brief boilerplate in the speech about countering Iran’s “destabilizing activity” and conventional weapons development nor the paper labeled as a “new strategy on Iran” that the White House released shortly before the speech provide such a strategy.  Most of the paper could have been written in either of the previous two administrations and probably in any of the previous half dozen.

The issue of Iranian compliance with the JCPOA is where the dissonance Trump is experiencing, in the face of the International Atomic Energy Agency’s confirmation of that compliance, is most acute.  Trump’s speechwriters went to the usual wells that have been tapped by longtime opponents of the JCPOA who have tried to find any possible ground for claiming an Iranian violation.  There was mention of heavy water, without any mention that in the two instances in which Iran’s supply of heavy water bumped up against the agreed-upon limits, Iran promptly did exactly what it is supposed to do under the agreement, which is to sell or otherwise dispose of the excess.  Nor was there any mention of how, given Iran’s reconfiguration of its heavy water reactor at Arak and permanent obligation under the JCPOA not to reprocess spent fuel, the heavy water does not represent a proliferation concern.

Trump also asserted that Iran had “intimidated international inspectors,” a line which evidently hinges on some Iranian rhetorical bravado about not giving foreigners the run of their country, and which continues a theme pushed by Nikki Haley that is intended to foster the belief that Iran is denying inspectors access to suspect sites.  Neither Trump nor Haley has provided a shred of evidence that there has been any such denial, or that the procedures under JCPOA for inspection of nondeclared as well as declared sites are not working well.

The key to reality as far as Iranian compliance is concerned can be found in Trump’s own speech.  When he announced that he was withholding certification under the terms of the legislation governing Congressional review, he explicitly said he was doing so on the basis of the clause in the legislation that does not pertain to Iranian compliance but instead refers to whether sanctions relief is still “appropriate and proportionate” to the benefits from the JCPOA.  If the administration had genuine grounds for claiming Iranian noncompliance, Trump surely would have invoked the clauses in the law that instead refer to whether Iran is meeting its obligations.

Trump also went to the usual wells in complaining about “flaws” in the JCPOA.  Also as usual, the implicit comparison was with a mythical, impossible-to-achieve pact, with no attention given to what the real negotiating possibilities were when the JCPOA was laboriously being hammered out nor what those possibilities are now.  This was true, for example, of what Trump said about the “sunset” provisions.  He disregarded the key considerations about these provisions, including how the most important elements of the agreement never expire and how whether such restrictions remain in place years from now will depend more on how all the parties to the JCPOA see their interests years from now (including whether the United States lives up to its commitments) than on the fine print of a past agreement.

Most important about the sunset clauses is that if the JCPOA were killed, the relevant restrictions on Iranian nuclear activities would vanish right away, not ten or twenty years from now.  This fact makes especially ironic Trump’s closing threat that if Congress doesn’t somehow come up with legislation to his liking, and other parties to the JCPOA do not—contrary to every indication those parties have been giving—bend to whatever it is Trump wants, then “the agreement will be terminated.”  If he really is worried about those sunset clauses, then this threat is akin to committing suicide because of fear of death.

The entire speech was filled with what is hoary, well-rehearsed, and well-refuted.  This was true of Trump’s efforts to encourage other misconceptions about the JCPOA, including the favorite one among opponents that Iran got its benefits “up front” before fulfilling most of its obligations.  In fact, the reverse was true, with Iran having to dismantle centrifuge cascades, dilute enriched uranium, gut its reactor, and take most of the steps it was required to take to close pathways to a nuclear weapon before it got an ounce of additional sanctions relief.  Besides the outright falsehoods, there was hardly a syllable of recognition in the speech that what is one of the most significant nuclear nonproliferation agreements in recent years had accomplished anything at all.

The first portion of Trump’s speech was a play to emotions that consisted of a recitation of bad things Iran had done through the years, dating back to the hostage crisis of almost forty years ago and featuring terrorist attacks by Iranian-supported groups in the 1980s.  One need not disagree that there were indeed many reprehensible Iranian deeds during those years to note the misrepresentations in the speech.  Trump tried to tie Iran to al-Qaeda (evidently relying on the fact of some al-Qaeda members having been in Iran, in a status that probably was most like house arrest) and its attacks, including the attacks on U.S. embassies in Africa.  That sort of linkage has as much validity as George W. Bush alleging an “alliance” between the Iraqi regime and al-Qaeda as one of the selling points for launching the Iraq War.

Missing from Trump’s bill of historical particulars about Iranian conduct was any sense of the possibility or desirability of regimes changing their conduct—partly through evolution of their own perception of self-interest and partly through inducements, which is what the JCPOA is all about in keeping Iran from building nuclear weapons.  Also missing was any reference to the responsibility of other players for much of the mayhem involved (as with the Saudi-led, U.S.-supported war in Yemen).

Missing as well was any genuine connection between all of the recited reasons to dislike Iran and a rationale for Trump undermining the JCPOA.  Trump offered the usual assertions about unfrozen assets that Iran “could use to fund terrorism” while offering no reason to believe that the level of what is unfrozen has anything to do with the level of Iran’s activity outside its borders.  Trump even used the chestnut about a payment by the Obama administration to Iran in the form of pallets of cash—without mentioning, of course, that this payment was settlement of an old claim involving aircraft that Iran under the shah had ordered but the United States never delivered, and that cash was used because Iran was still frozen out of western banking systems.

Although Trump claimed to be offering an entire new strategy on Iran and not just making a statement about the JCPOA, something else that was missing was any reason to believe that his administration has new and better ideas to do anything about non-nuclear Iranian actions, whether this involves missiles, terrorism, or anything else.  Neither in this speech nor on other occasions has Trump shown any awareness of the need to look at the reasons the other state is doing what it is doing, how this fits in with what other states are doing, and what incentives would be required to elicit any changes.

Trump referred repeatedly in his speech to the “Iranian dictatorship”.  There was no hint of recognition that the Iranian regime is currently one of the more democratic ones in the Middle East (and much more so than some other regimes in the region that Trump prefers to associate with).  There was no acknowledgement that the JCPOA was negotiated with the government of a popularly elected Iranian president who won re-election over hard-line opposition partly because of the promise of better relations, including economic relations, with the West under the JCPOA.