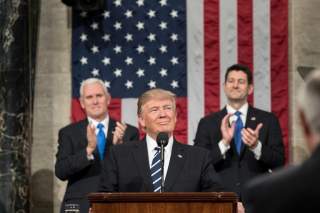 Many of us have had more than our fill of the 100-day assessments of Donald Trump’s presidency.  Besides the arbitrary nature of this point on the calendar, and besides the sheer overload of the number of attempts at such a first-quarter report card, most of what gets put on such cards does not get at what is most important in evaluating any presidency.  Heavy emphasis gets placed on legislative acts.  Although an ability to work with Congress is one attribute we like to see in a president, it is only one and hardly the most important one.  Besides, the reasons for lack of legislative accomplishment are apt to be found less in the White House than in obduracy and dysfunction in whoever has majority control at the other end of Pennsylvania Avenue.

The artificial reporting period encourages not only silly claims about accomplishments but also an incentive to give the impression of motion and progress even when substance is lacking.  The Trump White House certainly has been no exception to this pattern.  There has been, for example, the counting as an “accomplishment” the appointment and confirmation this early in the presidential term of a Supreme Court justice—without mentioning, of course, that this event was the direct result of the Republican majority in the Senate refusing for a year even to consider the previous president’s nominee (and then expanding the “nuclear option” to shove through Trump’s nominee).  Also added to the count are executive orders that only undo something that President Obama did, or, in many cases, that order a cabinet secretary to study how something that Obama did could be undone.

It’s not just the White House and its supporters who have indulged in the 100-day excesses.  There has been much over-analysis, sometimes tinged with either hope or worry, depending on the analyst’s policy preferences, that attempts to discern larger substance and implications from individual actions or exclamations from Trump.  Such attempts to extrapolate doctrine and direction from this inconsistent presidency are mostly a blood-from-a-turnip exercise.  Some lessons can indeed be drawn from the first 100 days, but with Trump the lessons are less a matter of either doctrine or accomplishment than of whether the habits, and the character and ability or lack thereof, that Trump exhibited during the campaign and in his earlier business career are continuing while he is office.

One of the best summary observations in this regard is from Washington Post columnist Steven Pearlstein, who writes on business and financial matters but whose conclusions could apply as well to Trump’s handling of a wide range of foreign and domestic matters: “What we know, first and foremost, is that it hardly matters what Trump says because what he says is as likely as not to have no relationship to the truth, no relationship to what he said last year during the campaign or even what he said last week. What he says bears no relationship to any consistent political or policy ideology or world-view. What he says is also likely to bear no relationship to what his top advisers or appointees have said or believe, making them unreliable interlocutors even if they agreed among themselves, which they don’t. This lack of clear policy is compounded by the fact that the president, despite his boasts to the contrary, knows very little about the topics at hand and isn’t particularly interested in learning. In other words, he’s still making it up as he goes along.”

Many elements of dismay can follow from the fact of having this kind of president.  We are apt to get a better idea of which specific things are most worthy of dismay as the rest of this presidency unfolds.  I suggest, however, that a prime, overarching reason to worry is Trump’s utter disregard for the truth.  Not just a disregard, actually, but a determination to crush the truth and to instill falsehood in the minds of as many people as possible.  The Post’s fact checker, Glenn Kessler, summarizes the situation by noting that “the pace and volume of the president’s misstatements” are so great that he and other fact checkers “cannot possibly keep up.”  Kessler also observes how Trump’s handling of falsehoods is qualitatively as well as quantitatively different from the garden variety of lying in which many politicians indulge: “Many will drop a false claim after it has been deemed false.  But Trump just repeats the claim over and over.”  It is a technique reminiscent of the Big Lie that totalitarian regimes have used, in which the repetition and brazenness of a lie help lead to its acceptance.

The problem is fundamental, and relates to a broad spectrum of policy issues both foreign and domestic, because truth—factual reality—is a necessary foundation to consider and evaluate and debate policy on any subject.  Crushing the truth means not just our having to endure any one misdirected policy; it means losing the ability even to address policy intelligently.  To the extent that falsehood is successfully instilled in the minds of enough people, the political system loses what would otherwise be its ability to provide a check on policy that is bad policy because it is inconsistent with factual reality.

One hundred days is enough time for the Trumpian assault on truth to start to become institutionalized.  The process has become plain at the website of the Environmental Protection Agency.  Changes at the website since Trump’s inauguration include not only what would be expected after a change of administrations in keeping any policy statements consistent with the new regime’s preferences; it also has involved expunging the truth.  Specifically, a section of the site that had existed for 20 years and provided detailed data and scientific information on climate change has been removed.  The deleted site, according to climate scientist Katharine Hayhoe of Texas Tech University, included “important summaries of climate science and indicators that clearly and unmistakably explain and document the impacts we are having on our planet.”  The site was a go-to place for authoritative information about climate change.  This is the sort of service one should expect to get from a government agency such as EPA (just like, before I took some recent foreign travel, the website of the Centers for Disease Control and Prevention served as a go-to site for authoritative information about what inoculations I would need).  Now that part of the EPA site is gone.

EPA Administrator Scott Pruitt approved the deletion because, according to an anonymous staffer under Pruitt, “we can’t have information which contradicts the actions we have taken in the last two months”.  So instead of defending those actions in a well-informed policy debate based on truth, the administration’s approach was to delete the truth.  If the policy doesn’t conform with reality, then deny the reality and make it as hard as possible for citizens to be informed of the reality.

Orwell’s Ministry of Truth may be closer than we thought.