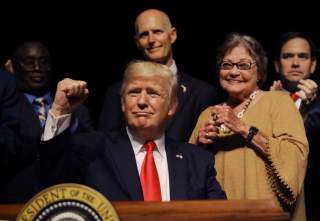 It is no surprise that Iranian leaders have no interest in responding to President Donald Trump’s offer to hold a meeting. What would there be to talk about, especially that there appears to be no normal working-level U.S.-Iranian diplomacy going on? Trump’s credibility with the Iranians is near zero after trashing the one significant international agreement that both countries had signed in recent years. The Iranian leaders have no reason to play to Trump’s theater in which he would portray a supplicant Iran as responding to his campaign of pressure.

President Trump’s all-caps tweet about Iran the previous week was hardly a natural response to anything the Iranians had been saying or doing lately. Iranian president Hassan Rouhani did make a speech on the same day in which he stated, “America should know that peace with Iran is the mother of all peace, and war with Iran is the mother of all wars,” while advising Trump that “to play with the lion’s tail” would become a source of “regret.” So, Rouhani was saying that he wants peace with America and that moving toward war would be a bad idea. Hardly the stuff that ordinarily would provoke a flaming riposte.

To the extent Iranian leaders might be sounding a little testy these days, no one should be surprised. In response to Iran’s internationally certified compliance with an agreement in which Iran willingly subjected itself to some of the most severe restrictions and intrusive monitoring in the history of nuclear arms control, the Trump administration’s response has been to renege on U.S. obligations under the same agreement, to swear hostility toward Iran, to wage economic warfare against it, and blatantly to attempt to destabilize it.

Trump’s now-familiar methods give rise to some possible motivations for his blast on Twitter. Trump is, of course, a master of commanding and diverting the attention of the media and the public. This stoking of the fire aimed at Iran helped to steal headlines from a miserable Russia-centered week that included the embarrassment at Helsinki. The week continued with a release of documents that knocked down a scenario that Trump and his partisan defenders have tried to spin about allegedly ignoble motives underlying the investigation into Russia’s election interference.

Trump’s threat in his tweet of “consequences the likes of which few throughout history have ever suffered before” [all capitals in the original] brought to mind his earlier threat against North Korea of “fire and fury like the world has never seen.” This comparison in turn evoked another of Trump’s now-familiar tactics, which he tried to use with the North Korean issue, which is to create a crisis as part of his contention that his predecessors left him a mess and then, after holding a meeting or signing something, claiming that he has achieved a wonderful improvement. The current tension with Iran, featuring the United States reneging on the nuclear agreement, certainly is a creation of the Trump administration. But there any similarity with the North Korean case ends.

A critical difference between the two cases concerns the positions of other states in each region. Neighbors of North Korea have welcomed dialogue and détente with Pyongyang, with South Korea’s President Moon Jae-in deserving most of the credit for moving things in that direction. By contrast, the principal regional rivals of Iran—to whom Trump has subcontracted most of his Middle East policy—don’t want any detente between Washington and Tehran. For Israel, Saudi Arabia, and the United Arab Emirates, unending U.S.-Iranian hostility sustains their own privileged relationships with the United States, keeps a major regional rival isolated, and diverts attention from their own foibles and vulnerabilities worthy of international attention.

The timing of Trump’s all-caps blast most likely was related to Secretary of State Mike Pompeo’s speech the same day, which was a full-throated call to destabilize the Iranian government. The secretary and the president probably hope for some form of regime change in Iran as the one development that somewhere up the line—say, within about two years, before the U.S. election in 2020—they will be able to point to as a foreign policy “accomplishment” in the absence of any other developments for which they can make that claim. Pompeo, at least, is smart enough to realize how implausible is a “better deal” with Iran on its nuclear program, despite the administration rhetoric on that theme. A nothing-but-pressure approach was tried before for years and failed, and now is even less likely to yield results when its only protagonist is not an international coalition but instead an isolated United States.

In this regard, it is revealing that in his speech, Pompeo said almost nothing about nuclear matters—an issue that would have dominated any U.S. speech on Iran a few years ago. There was nothing to say, other than that the issue was resolved, in the best feasible way, by the multilateral agreement that was negotiated under the previous administration and that the Trump administration categorically rejected.

On North Korea, it must be sinking in even with Trump that, despite his rhetoric after the Singapore summit meeting, the North Korean nuclear problem is nowhere near being solved. Solving it would be a genuine foreign-policy accomplishment, but this, too, may be out of reach during what would be a politically meaningful time frame for Trump.

Regime change in Iran is itself an unlikely “accomplishment,” notwithstanding the administration’s rhetoric and economic warfare intended to bring it about. Wishful thinking prevails. Street demonstrations in Iran that are far smaller than those that fizzled out in the time of the Green Movement several years ago are looked on with hope as harbingers of the regime’s imminent collapse. (An interesting duality in Pompeo’s appearance was that, although he pointed to protests in Iran as evidence of what he portrayed as a population unhappy with the regime, his response to a protestor who interrupted his own speech—shouting something about the migrant children controversy—was “if there were only so much freedom of expression in Iran.”)

Much of the administration’s interference and economic warfare makes regime change in Iran less, not more, likely. The sanctions lend credibility to the regime’s argument that Iran’s economic shortcomings are due more to the United States than to the regime’s mismanagement. The sanctions hurt ordinary Iranians far more than privileged members of the regime. Moreover, a U.S. administration that is openly anti-Islamic—as represented by the travel ban, which affects Iranians more than any other nationality—is hardly taken in Iran as a credible source of inspiration.

Even if the regime in Iran were to change significantly in the next couple of years, that leaves the question of the direction of change. The bankruptcy of the administration’s thinking on this subject is underscored by the role that the cult-cum-terrorist-group known as the Mujahedin-e Khalq or MEK plays in that thinking. The MEK has American blood on its hands, and it lost almost all support it once had in Iran when it became an auxiliary to Saddam Hussein’s security apparatus during the Iran-Iraq War. Trump’s national security adviser, John Bolton, and his lawyer, Rudolph Giuliani, are among those close to the president who have sung the praises of the MEK in exchange for fat speaking fees.

If significant political change were to occur in Tehran in the next couple of years—especially after everything the Trump administration has done, including reneging on the nuclear agreement, to discredit moderates such as Rouhani—that change would most likely be in a hardline direction. One possibility would be the Revolutionary Guard acquiring more extensive powers, even to the point of a military dictatorship.

Change is unlikely to be in a more democratic direction. Indeed, the regional rivals of Iran with sway over the administration’s policies do not want more democracy (or any democracy, for that matter), in Iran. Such a development could become a basis for U.S.-Iranian rapprochement that they definitely do not want, and that could lessen their own privileged positions with Washington. An Israeli intelligence officer told a visiting scholar when Iran’s Green Movement was active in 2009 that a victory by the movement would be “Israel’s worst nightmare” because it would mean less Iranian isolation and more resulting Iranian power.

The Saudi regime needs to worry not only about a possible tilt by the United States toward a more democratic Iran but also the example that such a democracy would set for subjects of the Saudi regime’s own highly autocratic rule. Herein lies another curiosity in Pompeo’s speech, which made a big deal about Iranian leaders enriching themselves, and this being a reason to look for regime change in Iran. Wouldn’t there be similar political implications of the rake-offs of Saudi oil revenues that sustain the expensive tastes of the royal family?

The best outcome—and it isn’t good at all--that one can hope for from the administration’s current course on Iran is endless tension, more antagonizing of Iranian citizens who see the United States as hostile to their own interests, and a constant risk of escalation to open warfare. If the remaining parties to the nuclear agreement cannot keep that accord going, and if the Trump administration’s threats continue to revive thinking in Iran about the value of a nuclear deterrent, then a new nuclear crisis might be added to the mess.