The Uncomfortable Truth about Afghanistan's Future 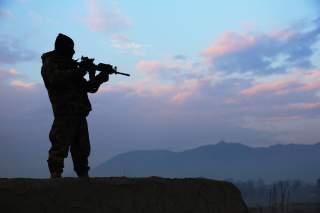 Anyone looking in Afghanistan for an easily understood story of good versus evil, or moderation versus extremism, will be disappointed. That war-torn country is a congeries of conflicts with diverse ethnic, sectarian, and ideological overtones. Battles are fought between antagonists who hate each other but each exemplify values far different from anything that Americans would identify with or want to defend. And that’s just the internal Afghan conflicts, on top of which is the added complexity of external involvement by Pakistan, India, and others.

Such a place is unfavorable territory for prosecuting what has become America’s longest war, which has no military solution in sight. President Donald Trump is right to seek a negotiated agreement that would permit a U.S. military withdrawal, even though his diplomatic clumsiness, on display during a meeting with the Pakistani prime minister, needlessly offended Afghans with talk about how he could wipe Afghanistan off the face of the Earth if he chose to, and needlessly angered Indians with his false claim that New Delhi wanted him to mediate the Kashmir dispute.

Whatever agreement emerges from ongoing negotiations between the Afghan Taliban and U.S. envoy Zalmay Khalilzad is sure to face criticism from people in Washington quick to focus on what an undesirable lot the Taliban are. Indeed, there is much to loathe about the Taliban’s domestic policies, especially regarding their medieval views about the role of women. But the critics should keep in mind the complexities of Afghan conflict and which, if any, issues involving Afghanistan really are important enough to the United States to become make-or-break issues in negotiations.

International terrorism, which can affect U.S. interests, is probably the most often cited rationale for U.S. military involvement in Afghanistan. The rationale routinely overstates the supposed uniqueness of Afghanistan as a base for terrorists, an overstatement that projects into the future some irreproducible circumstances of the past. Nonetheless, there are real terrorists in Afghanistan, and on this issue it is worth reflecting on some reporting by Washington Post columnist David Ignatius during a recent visit there. Ignatius refers to fighting between the Taliban and the Afghan affiliate of the Islamic State or ISIS. In a couple of provinces in the north and west of the country, ISIS fighters faced a “double whammy: U.S. counterterrorism forces struck the top leadership, and mainstream Taliban fighters cleaned up the rest.” The fact that the Taliban and the United States share a common enemy in the form of ISIS leads Ignatius to wonder, “Could the United States and the Taliban quietly cooperate against a common enemy, after a peace deal?”

Setting aside details about what this might imply regarding any residual U.S. military presence, more fundamental observations follow from this line-up of conflict and cooperation. One is that the Afghan Taliban are not international terrorists. They never have been, even when, in a marriage of convenience, they hosted Osama bin Laden’s organization to get its help in the Afghan civil war than raging. The Taliban think negative and violent thoughts about the United States only insofar as the United States interferes with the Taliban’s objectives regarding the organization of politics and society inside Afghanistan.

Another observation is that even loathsome actors can be counterterrorist partners. Indeed, the story of counterterrorism worldwide is filled with strange bedfellows, although most of the cooperation that matters takes place out of public view. What’s more, a loathsome but local partner may be even more effective in the counterterrorist tasks that matter most than the United States would be. When someone else can do the fighting and dying for their own local reasons, and to combat an international terrorist group in the process, so much the better for the United States.

Finally, doing business with a distasteful element such as the Taliban, only some of whose interests parallel those of the United States, is not a reason to tie the United States to everything else such an element does. Nor is it a reason similarly to tie any other outside actor that has specific reasons to do business with the Taliban. The Trump administration, as part of its misrepresentation-filled campaign of stoking hostility toward Iran, has gone so far as to blame Iran for car bombs in Afghanistan that Tehran probably had nothing to do with. On the eve of a possible U.S. agreement with the Taliban, which will be followed by the Taliban continuing to blow things up as it fights its enemies within Afghanistan, the administration needs to be more careful about such stone-throwing.

Iran, by the way, has interests regarding Afghanistan, the Afghan civil war, and terrorism that closely parallel the interests of the United States—just as it did in the first few months of the U.S. intervention, when Iran provided critical help in midwifing a new Afghan government to replace the Taliban. Iranian interests have suffered in the past at the hands of the Taliban, and in more recent years from attacks by ISIS. There is no shortage of strange bedfellows in combating the likes of ISIS.

Whenever Ambassador Khalilzad’s negotiations bear fruit, the result should be judged not by the company that the United States has been keeping in the negotiating room but instead by how well the result upholds genuine U.S. interests while extracting it from its longest war in history.