The Undeclared War Against Iran 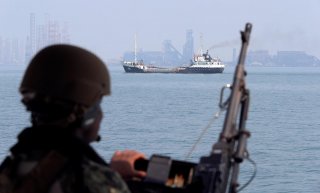 A series of violent attacks, involving explosions and fires, has been hitting Iran. The incidents have been too frequent and intense to be random accidents. They are part of an organized effort.

Caution is always advisable in attributing responsibility for such unclaimed acts, especially for all of us outside the government channels that possibly have better information about what is going on. But circumstances point strongly, as some mainstream press reporting reflects, to either or both of two suspects: the Netanyahu government in Israel, and the Trump administration in the United States.

Both of those suspects have track records that point that same way. The most conspicuous relevant act by the Trump administration was its assassination in January, with a drone-fired missile at the Baghdad airport, of Qassim Suleimani, one of the most prominent political and military figures in Iran. The Israeli record of aggressive acts against Iran has included a series of assassinations of Iranian nuclear scientists. Those murders were part of a larger, longstanding Israeli campaign of assassinations throughout the Middle East. That campaign is in turn part of an even larger Israeli record of aggressive acts throughout the region—including, over the past couple of years, scores of aerial attacks in Syria.

Neither the Israeli government nor the Trump administration has formally declared war against Iran, but the rhetoric of each has stopped only slightly short of such a declaration. The Trump administration has made clear its intention to inflict as much pain as possible on Iran, including with, but not limited to, economic sanctions. The Netanyahu government’s voluminous rhetoric on Iran has been every bit as hostile as what has come out of Washington, or as what has come in the opposite direction from Tehran.

Make no mistake about what is going on. This is not a set of actions “short of war,” as some people have described it. It is war. We certainly should worry about the conflict escalating into something so big that everyone will describe it as a war. But that does not make what already has transpired anything less than acts of war.

In this regard, do not be deceived by the Iranian regime’s downplaying of the recent attacks and its restraint—so far—regarding retaliation. A date that is circled on Iranian policymakers’ calendars is January 20, 2021. The Iranians can read American polls, and the dominant thread at the moment in Iranian thinking about security policy is to tough it out until there is regime change in Washington. Iranian leaders don’t want to be suckered into the sort of October (or July) surprise that would generate a rally-round-the-flag effect in America and could rescue Donald Trump’s fading re-election chances, although they realize the restraint does risk making them appear weak.

No Justification for the War

Although the current war has not been formally declared, it ought to be assessed by the same standards as one that has. Per international law and the Charter of the United Nations, the war would be justified only in self-defense, as a response to, or possibly pre-emption of, an attack in the other direction. That is not the current circumstance with Iran. There is no sign that Iran is about to attack either Israel or the United States. Given that Iran would be hopelessly outclassed militarily against either of those foes, it would be foolish for Iranian leaders to contemplate such an attack.

Self-defense does not come into play when considering proxies or other asymmetric means through which Iran might want to impose its will. A salient aspect of the large amount of ordnance that Israel has been flying across the border and dropping on targets in Syria (many of those targets reportedly connected to Syria’s ally Iran) is how there has been almost no ordnance crossing the border in the other direction, other than an odd air defense missile or two.

The weakness of any U.S. case based on self-defense was underscored by the confused official justifications for the killing of Suleimani. Hints dropped publicly about pre-empting a supposedly imminent Iranian attack never led to any evidence to that effect. In the end, the U.S. administration’s rationale rested mainly on Suleimani’s past role in supporting Iraqi militia operations that incurred American casualties during the fighting in Iraq. That fighting was a direct result of an offensive war—an act of aggression—that the United States launched in 2003.

Iran’s nuclear program has been a focus of attention in recent years, and one of the most publicized of the recent attacks on Iran was at the nuclear facility at Natanz. But the multilateral agreement known as the Joint Comprehensive Plan of Action, which placed severe restrictions on the Iranian program, did a far better job of keeping a possible Iranian nuclear weapon out of reach than anything the Trump administration has done since reneging on the agreement two years ago, after which Iran accelerated its nuclear activity. As Mark Fitzpatrick of the International Institute of Strategic Studies observes, the JCPOA did a better job in that regard than attacks such as the one on Natanz.

The attacks also do nothing to deter aggressive or otherwise undesirable Iranian actions.  Deterrence requires conditionality: pain is inflicted after bad behavior and avoided after good behavior. But the U.S. and Israeli governments seem determined to inflict pain no matter what Iran does—as underscored by the Trump administration’s reneging on the JCPOA and launching its “maximum pressure” campaign even though Iran was fully complying with its obligations under the agreement. Iran is being given an incentive only to retaliate, not to behave well.

Eventual retaliation, despite Tehran’s relative restraint so far, is one of the risks of the current undeclared war. Escalation into something bigger and more destructive is another risk. Even without such escalation, the current campaign extends indefinitely one of the fronts in America’s “forever war” in the Middle East.

Additionally, there isn’t any good coming out of the attacks in terms of weakening Iran or shifting a regional balance of power in America’s favor. Instead, it strengthens Iran’s reasons to find support from—and in so doing foster the influence of—the likes of Russia and China.

That government has an interest in perpetuating high tension with Iran to keep Iran as a bête noire blamable for all the ills of the Middle East, to preclude any rapprochement between Washington and Tehran, to promote Israeli relations with the Gulf Arab states, and to distract attention from issues that bring international scrutiny and criticism on Israel. At the moment, Netanyahu’s incentives in this regard are stronger than ever, which may help to explain the timing of the recent wave of attacks. The distraction value of stoking the conflict with Iran has increased as Netanyahu contemplates formal annexation of parts of the West Bank and the international condemnation that will come with it.

Netanyahu also, like the Iranians, is aware of the U.S. electoral calendar and American opinion polls. He may see the next few months as an optimum and limited time for stirring the regional pot even more than Israel has in the past, while his friend Donald Trump is still in power. To the extent the stirring helps his friend’s re-election chances, so much the better from his point of view.

Netanyahu is unlikely to be worrying about escalation into a bigger war, which would serve his purposes even more dramatically. Goading Iran into retaliating in a way that would spark such a war may have been one of the objectives of the recent attacks. And it would not be Netanyahu’s job to count the ensuing American casualties.