Unhappy Iraq, Buffeted from Within and Without 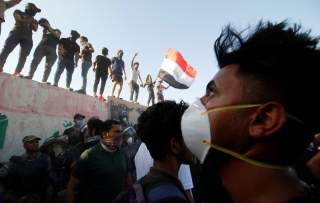 Syria is getting most of the attention these days as a Middle Eastern cockpit of competition among outside powers, with one of the latest moves being the White House’s indefinite extension of the U.S. military presence there. Syria’s problems should not divert attention, however, from similar things going on next door in Iraq—another country shaken by the so-called Islamic State, or ISIS, and another place where Donald Trump’s administration is subordinating everything to its campaign of hostility toward, and confrontation with, Iran.

Ever since the U.S. invasion of 2003, Iraq has been far from the emerging liberal democracy that the promoters of that war envisioned and promised. Iraq’s story over the past fifteen years has instead largely been one of civil war, insurgency, intensified sectarian strife that has spilled over Iraq’s borders and the birth of the terrorist group that became ISIS. Recently, public discontent and instability erupted into violent disturbances in the major southern city of Basra, where the violence included mobs—apparently angry at everybody about everything—torching government buildings and the Iranian consulate.

The Trump administration, viewing Iraq through its narrow anti-Iran lens, sees the country as a political playing field where America’s man in Baghdad, special envoy Brett McGurk, has the job of keeping U.S.-backed leaders in power and keeping anyone friendly to Iran out of power. The approach is reminiscent of how, under the previous U.S. administration, Assistant Secretary of State Victoria Nuland saw it as her job to pick leaders of Ukraine. The anti-Iran dimension of U.S. policy shows itself as well in the Trump White House’s effort to blame Iran for anything untoward that happens in Iraq—including some rounds that landed recently near a couple of U.S. diplomatic buildings—while ignoring the fact that it was an Iranian consulate, not an American one, that got destroyed in the latest violence.

In a pattern that harks back to the making of the 2003 war—in which the war hawks listened to a few exiles who had little following inside Iraq—U.S. policy does not seem to be paying much attention to what most Iraqis want. What they chiefly want involves the sorts of things that motivated the protesters in Basra: such as clean water, reliable electricity and uncorrupt use of the southern region’s oil wealth.

Iraqi attitudes toward outside powers are complex, though no more so than in many other countries that get buffeted by larger foreign actors. Sectarianism is a factor in Iraqi attitudes toward Iran, although this dimension is complex as well. Most southern Iraqis share a Shia faith with most Iranians, but Iraqi Shia—including the senior Shia cleric in Iraq, Ayatollah Ali al-Sistani, even though he is ethnically Iranian—have not supported Ayatollah Ruhollah Khomeini’s concept of velayat-e faqih, or direct rule by clerics. Iraqis are also quite aware of which outside power most helped them to repel the advances of the Sunni extremists of ISIS; that power was Iran, which has provided more such help than the United States.

Physical proximity to Iran figures into Iraqi thinking and life in a couple of ways, one of which is economic. Prosperity calls for substantial commerce across the Iraqi-Iranian border. Pressure that the United States is exerting on the Iraqi government of Haider al-Abadi to stop dollar transactions with Iran and to stop importing an assortment of Iranian goods, including fuel, is a prescription for hardship rather than prosperity. Accordingly, such pressure as part of the U.S. economic war on Iran works against the American objective of shoring up Abadi’s shaky hold on power.

As for the security side of being a neighbor of Iran, neither Iraqis nor Iranians want a repeat of the highly destructive Iran-Iraq War of the 1980s. This fact, along with the economic considerations and the shared opposition to ISIS, argue for maintaining a reasonably cordial relationship between Baghdad and Tehran.

At the same time, however, Iraqi nationalism places limits on that relationship. The sentiments involved were displayed during the Iran-Iraq War, when Iraqi Shia placed nationality over religion in determining their loyalties. Most Iraqis welcome mutually profitable trade with Iran and Iranian assistance against the likes of ISIS, but they do not want anything that looks like Iranian domination. The incineration of the Iranian consulate in Basra can be interpreted partly as a sending of that message. Left on their own, Iraqis’ natural inclinations regarding regional relations would be to maintain extensive and mostly friendly relations with Iran, but with their own nationalism keeping Iraq from becoming anything like a client state of Iran. Such measured and mutually beneficial relations also would be most conducive to stability inside Iraq and in the surrounding region.

Americans, whose own nation’s geography frees it from having to live with a potentially threatening neighbor, have a hard time understanding this perspective. To aid in that understanding, consider an admittedly very imperfect comparison closer to home: Mexico’s relationship with the United States. Even before Trump, Mexicans had plenty of reasons to be wary and resentful toward its powerful northern neighbor. But economic prosperity for Mexico requires a close relationship with the United States. That’s what the North American Free Trade Agreement is, from Mexico’s viewpoint, all about. And Mexico certainly doesn’t want a war with the United States. The last time it had such a war, Mexico got whipped and lost a third of its territory.

Regardless of any wariness and resentment toward the United States, there is no good role for an outside power an ocean away—such as, say, France—imposing itself as a supposed counterweight to U.S. influence. France tried to do that in the 1860s, when the United States was distracted by its Civil War, by installing an Austrian prince as Emperor Maximilian of Mexico. That experience did not turn out well for Mexico, for Maximilian (whom the restored Republic of Mexico executed in 1867) or for France. The United States is not doing Abadi or any other Iraqi leader any favors if it makes him into an American Maximilian.

Image: Iraqi protesters stand on concrete blast walls during a protest near the building of the government office in Basra, Iraq September 6, 2018. REUTERS/Essam al-Sudani