Unipolar Strategy in a Multipolar World 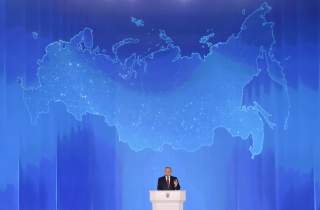 Vladimir Putin’s video show about formidable new Russian strategic weapons, which took up half of the Russian president’s recent state of the nation address, has given defense analysts plenty to chew on.  The presentation, which Putin probably was aiming at his domestic audience as well as an international one, left open questions as to how close to deployment are the weapons that were depicted in animated form, such as nuclear-powered cruise missiles and port-demolishing nuclear torpedoes designed to circumvent U.S. defenses.  But also important is the larger international political process of which this show is just one manifestation.  That process involves not only Russia but also other powers and how they are responding to U.S. policies.

To understand what is going on, use as a reference point the National Security Strategy (NSS) that the Trump administration released late last year (while bearing in mind that this type of document, in any administration, is less a true strategy than an expression of attitudes and objectives).  The dominant theme of Trump’s NSS, articulated in its opening section, is that the world is overwhelmingly a competitive place in which America’s adversaries are “determined” to do unfriendly things.  Russia and China are described as “determined” to “grow their militaries”.  Other adversaries are “determined” to threaten Americans through other harmful actions.

The NSS explicitly rejects engagement with adversaries, but at least as significant is what the document does not say.   It gives not the slightest hint that any of the apparently unfriendly actions by adversaries could in any way be responses to actions or policies of the United States.  Instead, any untoward or unwelcome action by an adversary is assumed to have occurred because the adversary was already “determined” to do it.

The NSS declares the unipolar objective of “rebuilding our military so that it remains preeminent” and able to “fight and win” anywhere in the world.  But it refuses to recognize any way in which even a dominant single pole would influence the thoughts and actions of other players, other than to awe, deter, or defeat them.

The administration’s public documents that are subsidiary to the NSS follow the same principal line, although with some wavering from that line.  The more recently released National Defense Strategy (NDS) does briefly mention offering “competitors and adversaries an outstretched hand, open to opportunities for cooperation”.  But the only way in which the NDS refers to U.S. policies affecting the policies and actions of others is in declaring, “The willingness of rivals to abandon aggression will depend on their perception of U.S. strength and the vitality of our alliances and partnerships.”  Its characterization of the thinking and motivations of adversaries is illustrated by its summary comment on China: “As China continues its economic and military ascendance, asserting power through an all-of-nation long-term strategy, it will continue to pursue a military modernization program that seeks Indo-Pacific regional hegemony in the near-term and displacement of the United States to achieve global preeminence in the future.”  In other words, it is again all about determination on the part of the other guy.

The also recent Nuclear Posture Review (NPR), which gained public attention for its advocacy of the development of new “low yield” U.S. nuclear weapons, sounds downright pacifist in places in comparison with the NSS.  It says good things about arms control, accepts as an ultimate goal the abolition of nuclear weapons, and states, “The United States does not wish to regard either Russia or China as an adversary and seeks stable relations with both.”  But as with the other Trump administration documents, there is no explicit recognition of how what the United States does, including building up its nuclear forces, can affect the decisions of other states, other than to deter them from doing bad things they supposedly otherwise would want to do.

These documents are products of a process that involves political leadership as well as bureaucracies, and some of this mixture shows through in the results.  It is not surprising that the most unexpurgated Trumpism shows through in the White House-centric NSS, while the NDS and NPR contain hints of more careful thinking among professionals in the Department of Defense and elsewhere in the national security bureaucracy, some of whom no doubt have thought seriously about the variety of ways in which other states react to U.S. policies.

Some of what these documents express reflects long-established thinking of a Washington national security establishment, a.k.a. The Blob, one of whose tenets is the maintenance of worldwide U.S. hard-power superiority.  But a total disregard for how others might respond assertively rather than submissively to what the United States does is more distinctively Trumpian.  The same blithe disregard for such responses is glaringly displayed in Trump’s declaration of a trade war.

With a new Cold War developing with Russia, and perhaps another one with China, it would once again behoove U.S. policymakers to acquaint themselves with some of the doctrine dating from the earlier Cold War that stemmed from long study by political scientists and strategists.  Two phenomena in particular, both of which are disadvantageous to U.S. interests when they occur and both of which the Trump administration’s posture ignores, are worthy of note.

One is the security dilemma, in which what one state does for defensive reasons, another state perceives as offensive and threatening—and is likely to respond in kind.  This situation is increasingly applicable to much of what the United States is doing with its hard power, given that it is the most powerful player in the world and that it plays at least as much in other people’s neighborhoods as it does in its own.  Security dilemmas can arise not only vis-à-vis Russia and China but also with other states that the United States has defined as adversaries.

The other phenomenon is arms racing: the responding to an adversary’s military build-up with a build-up of one’s own, in an attempt to restore the previous balance.  And then the adversary builds up some more to try to regain its version of a balance—and so on.  Putin’s show-and-tell was part of an arms race already under way.  Russia explicitly cites the George W. Bush administration’s withdrawal from the ballistic missile defense (ABM) treaty as a reason for developing the kind of defense-circumventing advanced strategic weapons of which Putin spoke.  His government is not making such efforts just because it is “determined” to do so, even when taking into account Putin’s domestic political equities.  The ingredients for similar security dilemmas and arms-races, at the conventional as well as nuclear level, between the United States and China is considerable.  And insofar as domestic sentiment in China may influence the actions of Chinese leaders during an international crisis, those leaders are less, not more, likely to back down in the face of a military threat from the United States.

The multipolarity of today’s world exacerbates security dilemmas and arms races, in ways that extend beyond great powers to middle-level ones.  The Bush administration explained its withdrawal from the ABM treaty in terms of a need to defend against “rogue” states.  The United States explained the later installation of missile defense systems in Eastern Europe in terms of protecting Europe from Iranian missiles, but Russia saw it as a threat to itself and as an effort to negate the capability of Russian strategic weapons.

Some of those who give thought to the original Cold War may think longingly of how Ronald Reagan declared an arms race with the USSR and “won” in the sense of what happened a few years later to the USSR.  But that is a wrong lesson to draw, because similar events are not about to recur.  Russians already have lived through their history of the break-up of the union, the disarray of the Yeltsin years, and finding a nationalist vibe that Putin skillfully expresses and exploits.  Putin isn’t going anywhere soon.  Neither, evidently, is Xi Jinping in China, which shows no sign of becoming like the Soviet Union in 1991.

The Trump administration is on course, through disregard for the rest of the world’s responses to its own policies, to keep adversaries adversarial, if not more so, and to keep the world just as threatening as ever, if not more so.  The military spending may become higher and the bluster may become louder, but Americans will be no safer.