Uniting, Against Trump's Policies, for Peace 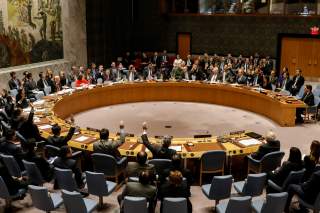 When North Korea began the Korean War with an invasion of South Korea in June 1950, the armed response was waged under the flag of the United Nations thanks to the Soviet Union having absented itself from the Security Council. The Soviets were boycotting the council to protest the fact that China’s seat had not been given to Mao Zedong’s communists, who had won the Chinese civil war the previous October. With no Soviet veto in the way, the Security Council quickly passed the resolutions necessary to bestow UN sanction on the U.S.-led military resistance to the North’s aggression.

The Soviets came to realize that they were not going to get support for their contention that the absence of any of the council’s permanent members should prevent the council from conducting business. The Soviets resumed their seat and began vetoing further resolutions on Korea. To get around this obstruction, U.S. diplomats led by Secretary of State Dean Acheson persuaded enough other delegations at the UN to have the General Assembly, where there are no vetoes, assert the power to take action on matters on which the Security Council was unable to act. That assertion, known as the “Uniting for Peace” resolution, passed the General Assembly in November 1950.

The General Assembly has used this power sparingly, in recognition of how it twists somewhat the division of responsibilities envisioned in the UN Charter. The power is appropriately looked at as a last resort in the face of obstructionism by any of the veto-wielding permanent members of the Security Council. The most recent use of the power came this week, with the General Assembly passing a resolution essentially identical to one that the United States had vetoed three days earlier and had been supported by all fourteen other members of the Security Council. The resolution was the international community’s response to the Trump administration’s declaration that Jerusalem is the capital of Israel and stated intention to move the U.S. embassy there.

The vote in the General Assembly was 128 countries in favor, nine against, and 35 abstentions. Besides the United States and Israel, the only “no” votes came from some of the Pacific microstates among whom the United States usually gets support when the support is meager (Marshall Islands, Micronesia, Nauru, and Palau) as well as Guatemala, Honduras, and Togo. Among those casting “yes” votes were major U.S. allies such as Britain, France, and Germany.

Among the principal takeaways from the General Assembly’s action is that an international sense of justice and fairness matters. Many states reject the notion that might makes right, which is how the Israeli government has treated its relations with the Palestinians, and how the Trump administration approached its lobbying on this resolution.

Another conclusion is that, notwithstanding how much the Israeli government and its supporters in Washington would like to think that Arabs don’t care about the Israeli-Palestinian conflict anymore and that the only thing that matters to them these days is to confront Iran, that is not how Arab governments (and certainly their constituents in the street) think. Every Arab state supported the resolution. Non-Arab Muslims also care about Jerusalem. Every Muslim majority state except Turkmenistan (which was absent) voted for the resolution.

The administration’s threats and bullying did not work. The crude tactics included Nikki Haley’s rhetoric about “taking names” and Donald Trump’s bombast about cutting off U.S. aid. Among the Arab states that supported the resolution were the two states—Egypt and Jordan—that receive more U.S. aid than anyone other than Israel. The very crudeness of the tactics, and the offense taken to bullying, probably made the tactics counterproductive.

More generally, the result of the vote is one more illustration of how much less is the capacity of the United States to push the rest of the world around than those Americans of an assertive nationalist stripe seem to think. This discrepancy between reality and uber-nationalist belief predates Trump and has existed at least since the post-Cold War “unipolar moment” that was barely a moment, if that. Trump’s policies and rhetoric have caused international confidence in the United States to plummet to even lower depths. The United States’ pushing ability has dropped along with the confidence.