What If the Mueller Investigation Pushed Trump to Attack Iran? 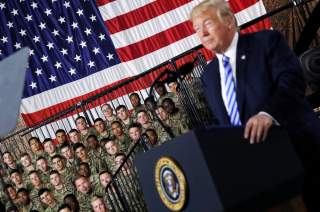 Michael Cohen’s guilty plea directly implicating President Trump in the commission of a crime has stimulated new talk about possible impeachment. Given how the case involves sexual liaisons, it also has stimulated comparisons with the impeachment of Bill Clinton. Most such comparisons focus on the domestic politics of each episode, and on such questions as whether Democrats who downplayed the significance of Clinton's dalliance with a White House intern would be inconsistent if they now went after Trump—although Clinton's behavior did not involve an election and violation of campaign finance law—whereas Cohen's allegation about Trump does.

Those more interested in foreign and security policy might focus instead on another dimension of how Clinton’s caper with Monica Lewinsky was discussed at the time. When Clinton, following al-Qaeda’s attacks on the U.S. embassies in Nairobi and Dar es Salaam twenty years ago this month, ordered cruise missile attacks against facilities associated with al-Qaeda in Afghanistan and Sudan, some of his political opponents accused him of using the strikes to boost domestic support that was sagging amid the Lewinsky affair. The accusation was stimulated partly by the timing of the missile strikes, which occurred just three days after Clinton admitted in a televised address that he had misled the public about his relationship with Lewinsky.

Although it is impossible to know every factor affecting Clinton’s thinking at the time, it would be difficult to make a persuasive case that political diversion was the main motivation. A terrorist group had just bombed two U.S. embassies—the sort of attack on U.S. interests in which a forceful response is widely considered not only justified but even mandatory, as it surely would be today. Clinton’s ordering of the missile strikes received considerable bipartisan support in Congress, including from Speaker of the House Newt Gingrich, who said the president “did exactly the right thing.” The timing of the missile strikes was determined by the reported presence of Osama bin Laden and other terrorist leaders at one of the targeted sites in Afghanistan.

The suspicion that Clinton’s decision had more to do with his domestic political problems than with terrorism was nonetheless so persistent that it acquired a short-hand label—the “Wag the Dog” scenario. That label was named after the title of a then-popular movie, the plot of which involved the White House concocting a phony war to divert attention from a presidential sex scandal. Furthermore, the long history of foreign wars bolstering political leaders’ domestic support and giving them the benefit of a rally-round-the-flag effect make it legitimate to ask whether a politically beleaguered leader in our own day might be tempted to use a military campaign in this way.

If Donald Trump were so tempted, a military attack against a mere terrorist group probably would be insufficient to achieve the desired political effect. A military strike against al-Qaeda today, in Afghanistan or elsewhere, would look little different from ongoing U.S. military operations overseas. The same goes for any attacks on the remnants of the mini-state established by the so-called Islamic State or ISIS.

The likely adversary of any such Trumpian war would be Iran. The administration already has an ongoing campaign of ratcheting up tension with, and hostility toward, Iran, thus laying the political and psychological groundwork for a war. The consciously elevated tension has increased the probability of incidents that could spark a war or provide an excuse for initiating one.

So a question of the moment is: will Donald Trump’s domestic political and legal troubles lead him intentionally to start such a war, as the ultimate diversionary tactic of his presidency?

He probably does not regard his troubles as having yet reached that point. Trump does not currently look like he is actively seeking a war. Endless hostility toward Iran already serves most of the purposes that having a foreign bête noire serves. Unrelenting tension with Iran, short of open warfare, that precludes any U.S.-Iranian rapprochement also serves most of the Iran-related objectives of the regimes in Israel, Saudi Arabia, and the United Arab Emirates, whose lead Trump has followed as far as policy on Iran is concerned.

Some members of Trump’s administration probably would welcome a war with Iran—most notably the national security advisor, John Bolton, who still believes the Iraq War was a good idea. These advisers are also in a position to push Trump in that direction. They will be countered, however, by others, probably including Secretary of Defense James Mattis, who loathes Iran as much as anyone but also seems to understand the immense downsides of such a conflict.

If criminal investigations surrounding Trump tighten to the point that his political base starts to show signs of cracking, then he may decide that the time has come to try that ultimate diversionary tactic. For two reasons, Trump is even more likely to go that route than other presidents under similar pressures would be. One is that Trump already has shown a strong inclination to rely on destructive diversion, mostly through tweets and oral statements. One explanation for why the outrages of his presidency have not engendered more opposition with staying power is that they are followed so fast and so frequently by other outrages that steal attention from whatever came before them. As a result, it is hard to stay worked up over any one behavior or policy of Trump when it quickly is eclipsed by something else.

The other reason is that Trump is always tactically focused on whatever immediately affects his personal standing and support, and he shows little sign of thinking strategically about what is in the larger and longer-term interests of the nation. It thus is quite plausible that he would launch a U.S.-Iranian war with little or no appreciation of the disastrous consequences of such a conflagration.