What U.S. Enmity has Wrought in Iran 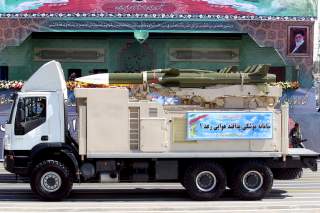 An important consequence of the unrelenting, unqualified hostility toward Iran that Donald Trump has made a centerpiece of his foreign policy is described in an article by Thomas Erdbrink of the New York Times about the impact of that policy on the Iranian public.  Erdbrink summarizes the overall effect this way: “In short, it appears that Mr. Trump and the Saudis have helped the government achieve what years of repression could never accomplish: widespread public support for the hard-line view that the United States and Riyadh cannot be trusted and that Iran is now a strong and capable state capable of staring down its enemies.”

Such an effect is unsurprising.  Nor are the underlying dynamics unique to Iran.  Two fundamental processes are at work in Iran to produce the effect Erdbrink is observing.  Both are foreshadowed by many earlier experiences of countries that felt especially threatened by a foreign power.

A variant of this first phenomenon—again with numerous examples through history—is the picking of fights with outsiders as a way for a ruler to muster more united domestic support than he otherwise would enjoy.  Mohammed bin Salman, the young authoritarian prince who now makes Saudi Arabia’s policies, is picking fights with Iran—the other day he likened Iranian supreme leader Ali Khamenei to Hitler—partly in the hope of making his remarkably audacious internal power grab succeed.  There may be something of the same motivation for Donald Trump, although as with his domestic policies, he is more interested in the loyalty of a narrow political base than in winning broader support.

The other fundamental process is the tendency of hard-line views, and those who propound them, to prevail against more moderate alternatives in the face of an external threat.  To preach about the malevolence and untrustworthiness of a foreign power is, in Iran as in the United States and in other countries, a defining characteristic of being a hard-liner.  Erdbrink quotes a hard-line Iranian political analyst named Hamidreza Taraghi as saying, “Thanks to Trump’s dishonest, cheating and crazy remarks, he has proved what we have said for a long time: America cannot be trusted. Many didn’t believe us, but now they do.”

This is not just a claim the hard-liners themselves make.  A liberal-minded theater director in Tehran observes, “We need to understand that the U.S. has been playing with us all along. Trump is proving that our hard-liners were right all these years, to say that America cannot be trusted.”

A major effect of the Trump administration’s vehement hatred of Iran and seeking of confrontation with it is thus to make Iranians more determined than ever to stay their current course, with more internal unity and political support than ever before.  The administration’s hostility naturally engenders negative feelings about the United States in return; it would hardly be a human reaction if they did not.  So the administration’s drumbeat message, that Iran is supposedly an implacable and irredeemable foe, is not only counterproductive but also to some degree self-fulfilling.

The popular sentiment in Iranian streets and salons is much more than a product of regime propaganda.  Despite Trump’s calling a "dictatorship" an Iranian political system that actually is more democratic than most in the Middle East, he is confronting not just a “fanatical regime” but instead a nation that is exhibiting nationalism very similar to what other nations have exhibited, especially so in times of externally imposed stress.

Iranians also constitute a relatively well-educated nation and can easily see through such Trumpian falsehoods as the allegation that Iran is in cahoots with the Sunni terrorists of al-Qaeda or ISIS rather than carrying much of the burden of fighting against them.  Erdbrink notes how one Revolutionary Guard soldier who was captured and beheaded by ISIS has become a national hero.  The reporter goes on to quote a self-described reformist in his early thirties: “There are many here like me, who don’t care for the Islamic Republic and its rules. But today is about something bigger than that; one of us has been killed. At the same time this American president is breaking our hearts with his rhetoric and threats. We have to choose sides. I choose for my country.”

Much of what the Trump administration and some others in the United States routinely label as “nefarious, malign, destabilizing behavior” of Iran in the Middle East is supported by, and is even a source of pride for, most ordinary Iranians.  They understandably see much of this Iranian activity—certainly including the military action against ISIS—as necessary for national defense, and/or a laudable contribution to a larger cause of international security.  The same goes for Iran’s development of ballistic missiles.  An Iranian sociology professor who is a leading reformist notes that many Iranians, “even those who are completely secular,” cheer missile tests because the tests “are making them feel strong and safe” in the face of growing threats from the United States and Saudi Arabia.

What U.S. policy is doing to Iranian public sentiment represents a huge missed opportunity, with a proud and intelligent people who otherwise could have been willing and able partners in much that the United States has hoped to accomplish.  This follows earlier missed opportunities, especially when the George W. Bush administration slammed the door in the face of an Iran that had been working effectively with the United States against al-Qaeda and the Afghan Taliban.  Now the Trump administration, egged on by the rulers of Israel and Saudi Arabia to whom Trump has surrendered the initiative on policy for this part of the world, and trashing rather than building upon the agreement that has successfully restricted the Iranian nuclear program, is sliding down an endless spiral of conflict, confrontation, and perhaps war.