Why Donald Trump Will Push Iran Into a War 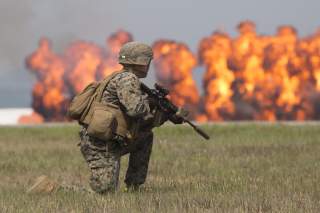 The statement by Secretary of State Mike Pompeo on the latest incident involving tankers in the Gulf of Oman is questionable on multiple counts, beginning with his immediate, semi-automatic attribution of responsibility to Iran. The origin of the fires and explosions on the tankers is still undetermined, grainy videos notwithstanding. The Japanese company that owns one of the tankers reports that the crew’s description of what hit the ship doesn’t square with the U.S. administration’s version. And no one has yet explained why the Iranian regime would go out of its way to embarrass Prime Minister Shinzo Abe of Japan—which has been one of the leading buyers of Iranian oil—by sabotaging a Japanese tanker on the very day Abe was meeting with Iran’s Supreme Leader Ali Khamenei.

Pompeo’s listing of the reasons behind what he labeled as the “assessment of the United States Government” regarding Iranian responsibility is curious in other respects. One of Pompeo’s reasons is “recent similar Iranian attacks on shipping”—an apparent reference to an incident in May in which four tankers off the coast of the United Arab Emirates sustained mysterious minor damage. The reasoning is circular. That incident is still shrouded in uncertainty as well, despite immediate blaming of Iran by the U.S. administration, as the newest incident.

Pompeo gave as another reason “the fact that no proxy group operating in the area has the resources and proficiency to act with such a high degree of sophistication.” Why just “proxy groups”? Why not states, especially given that there are other states in the region that would be only too happy to stoke tensions between the United States and Iran?

Nonetheless, Iran has to be a prime suspect in the sabotage of the tankers. Despite the continued uncertainty, it may well have been the perpetrator. Assume for the moment what the administration wants everyone to assume, which is that the Iranian regime attacked the ships. It is in asking why Iran might have done so that Pompeo’s statement is most questionable. Twice Pompeo applied the term unprovoked to Iranian actions (“40 years of unprovoked aggression against freedom-loving nations” and “these unprovoked attacks present a clear threat to international peace and security”).

Unprovoked? The Trump administration reneged completely over a year ago on U.S. commitments under the Joint Comprehensive Plan of Action (JCPOA), the multilateral agreement that has restricted Iran’s nuclear program and closed all possible paths to a nuclear weapon. Since then the administration has waged economic warfare on Iran, despite Iran continuing for a whole year to observe its obligations under the JCPOA. The administration has piled sanction upon sanction in a relentless effort to cripple Iran’s economy, make life miserable for Iranians, and weaken Iran in every way possible. It has pressured countries around the world not to do any business with Iran. The administration has accompanied this campaign with unlimited hostility, threats of military attack, and saber-rattling that has included escalating military deployments in Iran’s backyard. If this isn’t provoking Iran, then the term “provocation” has lost all meaning.

The current spike in tensions, including incidents involving oil tankers, is a direct and unsurprising result of the Trump administration’s failed “maximum pressure” campaign. There is no reason to believe, and nothing in the record of the last couple of decades to suggest, that Iran would be doing anything like sabotaging someone else’s oil tankers if the United States had abided by its commitments and been using diplomacy over the last couple of years to address any issues it has with Iran. No one in the United States likes to agree with observations by Iranian leaders, but when those leaders point out that Iran has not used its armed forces to commit acts of aggression against its regional neighbors, it is hard to refute their observation. The same thing cannot be said of certain other regional states.

If Iran sabotaged those tankers in the Gulf of Oman in response to the economic assault against their country, then it would be just as reactive as other Iranian actions in the region. Iran fought back ferociously when Iraq invaded Iran. It aided the creation of Hezbollah. When Israel invaded Lebanon, it gave some aid to the Houthis in Yemen when aerial assault by Saudi Arabia and the UAE turned Yemen into a humanitarian disaster. It militarily aided the governments of Iraq and Syria when those governments were under assault by the Islamic State and other insurgents. And it can be expected to respond if it is the target of more assaults, economic or military, from the United States. No one should have expected the Iranians, despite the remarkable patience they have shown over the past year, just to lie down and take it.

Pompeo asserted in his statement, “On April 22nd, Iran promised the world that it would interrupt the flow of oil through the Strait of Hormuz.” No, Iran didn’t promise that. What an Iranian Revolutionary Guard commander actually said was that Iran would block the Strait of Hormuz if Iran was not able to use the waterway to export its own oil. The commander was responding to the Trump administration’s latest escalation in its economic war against Iran, which was to eliminate waivers of U.S. sanctions against purchasers of Iranian oil, as part of an effort to reduce Iranian oil exports to zero. Again, the Iranians were reactive, in this case to U.S. escalation of hostility and infliction of major material harm to Iran.

The pro-war forces within the Trump administration are getting some of their mojo back, despite recent indications that they are trying the patience of their president, who probably does not want a war with Iran. The biggest stretch in Pompeo’s list of incidents that he was blaming on Iran was a car bomb in Afghanistan on May 31 that injured several U.S. service members. The attack was generally attributed to the Taliban, although the Islamic State also claimed credit, and Iran probably had nothing to do with it. Pompeo’s inclusion of the incident was clearly part of his contrived effort to argue that Congress’s post–9/11 authorization for the use of military force would legitimize a war with Iran.

If President Donald Trump really doesn’t want a war with Iran, he must recognize that diplomacy doesn’t just mean one side demanding and the other side complying. He also needs to realize that the maximum pressure campaign has failed to bring about a “better deal,” to change Iranian behavior for the better, or to hurt the Iranian regime more than the ordinary Iranians the administration claims to want to help. The campaign instead is destroying one of the more effective nuclear nonproliferation achievements in recent years and is now provoking reactions that, in places like the Gulf of Oman, make a new war more likely than before.