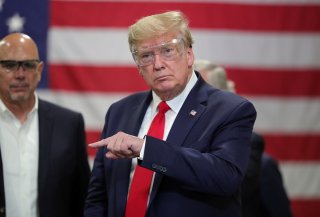 What do human rights in Hong Kong and nuclear reactors in Iran have in common? Answer: both have been the subject of recent announcements by the Trump administration that run directly and obviously counter to the very objectives that ostensibly were the purpose of the moves.

President Donald Trump’s statement following Beijing’s imposition on Hong Kong of mainland security strictures correctly described China’s action as a “tragedy for the people of Hong Kong” and a blow against Hong Kong’s status as a prosperous and free society. But the response that Trump announced in the same statement was to begin eliminating the U.S. policy exemptions that have given Hong Kong preferred treatment different from the way the United States treats mainland China.

The details of what will be eliminated are still uncertain, and investors in Hong Kong’s stock market were encouraged by how Trump’s latest move has so far been more talk than action. But to the extent that action will eventually come, the subjects that potentially will be affected include extradition, visas, intellectual property, and tariffs.

Any elimination of Hong Kong’s special treatment and subjugation of the territory to the same policies the United States applies to the rest of China would mostly hurt the very people of Hong Kong who are experiencing the tragedy of which Trump spoke. The administration’s response will compound that tragedy, especially while the administration continues a trade war against China.

It is difficult to see how that response would dissuade the Chinese regime from any further objectionable behavior toward Hong Kong. China might lose some of the benefits it has gained from Hong Kong’s functioning as an entrepot and financial center. But to Beijing, the U.S. announcement that Hong Kong is no longer autonomous is probably also a welcome acknowledgment that the assimilation of Hong Kong into China—Beijing’s objective all along—is proceeding apace.

Regarding Iran, Secretary of State Mike Pompeo stated last week, as he has stated many ties before, that Iran “must never obtain a nuclear weapon.” But the step he announced in the same statement was to kill the last effective measures the administration had hitherto accepted that are explicitly designed to make sure the Iranian nuclear program stays peaceful and never produces such a weapon. Those measures involve work by China, Russia, and Europeans to modify an Iranian reactor to make it proliferation-resistant, to take spent fuel off Iran’s hands, and to provide 20 percent enriched uranium as fuel for another reactor that produces medical isotopes so that Iran has no reason to produce such fuel itself. The United States cannot kill the cooperative work directly, but by ending the applicable waivers of secondary U.S. economic sanctions, it will be difficult for the states involved to continue the work.

The counterproductivity of this administration move in terms of the stated objective of preventing an Iranian nuclear weapon is glaringly self-evident. Over the longer term, the move is an invitation to Iran to design its reactors however it wants, no matter how much weapons-usable plutonium is produced. In the near term, it is an invitation to Iran to resume enriching uranium to twenty percent to produce the medically needed isotopes—enrichment that Iran was doing before the Joint Comprehensive Plan of Action (the JCPOA, which is also known as the Iran nuclear deal) was negotiated and was raising alarm bells because enrichment to that level represents most of the effort needed to enrich uranium to the level required for nuclear weapons.

China—and the idea that Trump is the only one displaying sufficient toughness toward China—has been shaping up as a major Trump and Republican campaign theme. Trump asserted in his statement last week that China has been “able to get away with a theft like no one was able to get away with before because of past politicians and, frankly, past presidents.” The Trump campaign has already released ads depicting presumptive Democratic presidential nominee Joe Biden as soft on China.

The initial main subtheme of the anti-China theme was trade. Then the coronavirus became an additional subtheme. Now, Trump sees Hong Kong as one more subject to add to that mix. It evidently doesn’t matter to him whether the administration’s response does anything to help residents of Hong Kong or to deter or dissuade China. What matters is to sustain a general image of toughness in response to bad things China does.

On Iran, the opposition all along to the JCPOA was also firmly rooted in domestic politics, as an effort to destroy what was a signature foreign policy achievement of former President Barack Obama. The counterproductivity of the Trump policy with regard to nuclear nonproliferation also has been present all along, as “maximum pressure” has been met with Iran exceeding—though not yet with any twenty percent enrichment—JCPOA limits it had earlier been scrupulously observing, and with no “better deal” in sight.

The main current objective of Trump and Pompeo regarding Iran is to sustain an image of toughness that is as vague as the one oriented toward China. Also as with China, it doesn’t seem to matter whether the specific measures taken are likely to have beneficial effects that outweigh the harmful ones. What matters to them is that their political base gets a sense that some sort of tough action is being taken in response to what a despised foreign adversary is doing.

A further Trump administration objective on Iran is to continue to wreck the JCPOA so that even if a President Biden tried to rejoin the agreement, then as Trump’s anti-Iran point man Brian Hook puts it, “There is not going to be much of it left to join.” Yet another objective, given how much Iran policy in the United States has politically been part of Israel policy, is to cater to the pro-Likud part of Trump’s political base. This objective has underlain another instance of counterproductivity regarding declared objectives—presentation of a “peace plan” that pushes an Israeli-Palestinian peace even farther out of reach.

A general lesson is that it is fruitless to assess Trump’s foreign policy in the analytical terms to which foreign policy wonks are accustomed, with means being examined according to how effectively they achieve stated ends. It also is pointless to try to define a Trump “doctrine” in the way that concept usually is applied to the foreign relations of different presidencies.

Understanding Trump’s policies require setting aside the stated ends and identifying the actual objectives. Those objectives have less to do with coherent ideas about dealing with the likes of China or Iran and more to do with maintaining domestic political power—when they don’t have even more to do with, as Dov Zakheim aptly characterizes what often drives Trump, “to nourish his narcissism and to aggrandize his family’s fortunes.”