Why the Purge of the Intelligence Inspectors General Matters 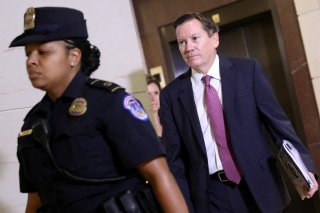 The understandable national preoccupation with the COVID-19 pandemic means insufficient attention to, and outrage about, other nasty things that are happening. This is true of President Donald Trump’s firing of Intelligence Community Inspector General Michael Atkinson. The only plausible explanation for the timing of this move, made late on a Friday night, is to take advantage of the distraction that the current public health and economic crisis has provided. The move is part of a larger purge by Trump of any officials—including ones who, like Atkinson, were his own appointees—who had any role in the uncovering of Trump’s malfeasance that led to his impeachment. Atkinson’s role involved receiving and, as required by law, informing congressional oversight committees of a whistleblower’s complaint about Trump pressuring a foreign government to incriminate one of his domestic political opponents.

Trump’s later comments on the firing were typical Trumpian invective: Atkinson “did a terrible job—absolutely terrible…a disgrace to IGs” for passing on a “fake” complaint. And as for the whistleblower, “somebody ought to sue his ass off.” Also typical for Trump, the invective has no connection to reality. Atkinson was doing his job. Michael Horowitz, the Justice Department IG who also chairs the Council of the Inspectors General on Integrity and Efficiency, praised Atkinson for his “integrity, professionalism, and commitment to the rule of law and independent oversight.” He pointedly added that this includes Atkinson’s handling of the Ukraine whistleblower complaint, which the then-acting director of national intelligence testified was done “by the book.” The whistleblower also was going by the book, and the complaint, far from being “fake,” proved to be remarkably accurate and useful lead information for subsequent investigation.

The firing continues some all-too-familiar patterns of behavior by Trump, but an inured nation must not allow such patterns to become the new normal. The purge of Atkinson provides two main reasons to be disturbed.

One is that it is another step in Trump’s politicization of the U.S. intelligence community, destroying objectivity at the top and hamstringing what objectivity survives below while attempting to turn the community into a political handmaiden of Trump. The acting director of national intelligence is an ideological fighter, Richard Grenell, whose only apparent qualification for the appointment is his singing of political tunes that please Trump. The nominee for taking the job permanently, John Ratcliffe, who padded his resume to cover his comparably thin qualifications for the position, evidently received the nod because of his defense of Trump in the House judiciary committee’s impeachment hearings. Other executive suite space vacated by intelligence professionals at the Office of the Director of National Intelligence is occupied by Kashyap Patel, who worked for Rep. Devin Nunes (R-Calif.) in trying to discredit investigations into Russian election interference.

Now the inspector general, who of all the senior officials in that office is supposed to be the most independent, is gone.

A consequence of this purging and politicizing is the effective loss of much of the functioning of that part of the U.S. government whose mission is to provide the most truthful and accurate picture possible of security threats to the United States and other overseas events of relevance to U.S. foreign and security policy. Bureaucracy below the executive suites will continue to operate, but it will be stifled when its message happens to be politically inconvenient to Trump. If that bureaucracy does anything to try to circumvent the stifling, then expect more firings. Look what happened to Capt. Brett Crozier, the commanding officer of a COVID-19-stricken aircraft carrier whose attempt to get attention for his crew’s plight was politically inconvenient enough that presidential displeasure helped to drive the captain’s ouster.

Don’t expect Congress, even if the opposition party controls at least one of the chambers, to be able to overcome the stifling and politicization to perform effectively its oversight and other functions. Recall that acting director of national intelligence Joseph Maguire was let go because he permitted, much to Trump’s displeasure, an entirely legitimate expert briefing to the House intelligence committee about the status of Russian election interference.

A second major reason to be concerned about the firing of Atkinson is that it is a blow against government accountability. Inspectors general are only a part of accountability but they are a major part. Persistent vacancies in inspector general positions are one way Trump is undermining accountability—which in the case of IGs includes accountability not just at high levels but all the way down through the ranks of the bureaucracies. Another way is to impede IGs’ performance of their duties, especially where Congress is involved. Most conspicuously this has included Trump’s declaration that he will not allow the new Special Inspector General for Pandemic Recovery to overcome the administration’s withholding from Congress of information about how it spends the vast sums authorized by the legislation that created that IG position. More recently, Trump suddenly ousted the Department of Defense’s IG, Glenn Fine, just days after Fine’s fellow inspectors general had chosen him to chair the Pandemic Response Accountability Committee, another oversight mechanism to ensure proper expenditure of COVID-19 economic relief funds.

Trump also uses slurs and innuendo to publicly denigrate inspectors general who have reached conclusions that are not to his liking. He reacted this way after the acting inspector general of the Department of Health and Human Services (one of the many places where the permanent IG job is vacant) reported on hospitals’ shortages of coronavirus testing supplies—a report that contradicted some of Trump’s assertions about the availability of tests. Asked by reporters about this, Trump lashed back in characteristic fashion: “When was she appointed?...Could politics be entered in that?...They did serve in the Obama administration?...There’s a typical fake news deal.” (The acting IG who issued the report is a career official who has served in HHS for two decades.)

Americans’ concerns about Atkinson’s firing ought to go beyond intelligence agencies and inspector general offices. The move marks another step toward a Trumpian dystopia in which both truth and accountability are rare. The firing could be called a canary in the coal mine if Washington hadn’t already become littered with canary carcasses warning of that dystopia.

The COVID-19 pandemic, given reported warnings by the intelligence community earlier this year followed by weeks of Trump nonetheless downplaying the danger, suggests how that dystopia will function with future crises. There need be no more worry about Richard Burr trading stocks based on classified information in briefings to the Senate intelligence committee because congressional committees won’t get such briefings if the message they convey is politically unwelcome to Trump.