Why Religious Policies in Israel Matter to U.S. Gentiles 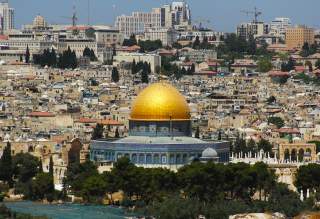 In recent weeks, the Israeli government has taken measures that have exacerbated tensions within world Jewry.  Each measure has reflected the political power of ultra-Orthodox parties within the ruling coalition of Prime Minister Benjamin Netanyahu.  One of the government’s moves was to suspend a plan to provide space for non-Orthodox men and women to pray together at the Western Wall in Jerusalem.  Currently the main prayer plaza at this holy site is run in accordance with Orthodox practice and has separate men’s and women’s sections.  The other development was Netanyahu’s endorsement of a bill that gives the ultra-Orthodox religious establishment a monopoly in determining what conversions to Judaism should be recognized in Israel.

Most critical commentary in the United States about these developments has focused on them as an affront to Jews in the United States.  American Jews, a large proportion of whom belong to Reform or Conservative branches of the faith, constitute one of the two largest concentrations, along with the population of Israel, of Jews worldwide.  A theme of the commentary has been that the Israeli government’s moves might weaken support for Israel among American Jews, and that such weakening could lead in turn to a lessening of the large, automatic, material and diplomatic support that the United States provides to Israel.  A further theme is an assumption that such lessening would be bad.

Non-Jews who do not live in Israel have no direct stake in the religious dimension of such controversies, and have little or nothing useful to say about that dimension.  To try to say something about it would make as little sense as non-Muslims lecturing Muslims about whether violence and extremism conform with Islam—although such lecturing often is attempted.  But the moves in question do involve important dimensions for anyone concerned about U.S. foreign policy.

Set aside for the moment how commentary that speaks of the political clout of American Jews in determining U.S. policy strays into especially sensitive territory—where, if a non-Jew enters that territory, one is apt to hear accusations of anti-Semitism.  There are, indeed, genuinely anti-Semitic conspiracy theories about Jews supposedly controlling all sorts of U.S. policies.  In any event, the politics of U.S. backing for Israel is not just a function of American Jews, even insofar as religious motivations are involved.  Evangelical Christians can be at least as conspicuous in offering zealous and unqualified support for Israel.

That still leaves two other dimensions of foreign policy concern.  One involves the Israeli government’s persistent efforts to conflate its own objectives with the interests of Jews worldwide.  Netanyahu’s presumption to speak and act on behalf of Jews everywhere serves at least a couple of politically useful purposes.  It encourages the kind of support from the Jewish Diaspora that, although not the whole picture as far as support from the United States or other countries is concerned, is indeed a major part of such backing.  The presumption also enables Netanyahu or others to play the anti-Semitism card in response to criticism of Israeli government policies.

The conflation is false.  Israeli policies are the policies of a government, not the expression of a religious faith or an ethnic group or a global community with an identity forged by history.  To categorize any criticism of those policies as a manifestation of anti-Jewish prejudice is to say that such policies should never be subject to criticism; that would be neither good for Israel nor good for the policies of other countries toward Israel.  To find fault with policies of Iran or Saudi Arabia—states that also define themselves in terms of a specific religion—is not necessarily anti-Islamic.  To find fault with policies of Israel is not necessarily anti-Jewish.

The controversies about conversions and about prayer at the Western Wall place in stark relief the separation between the Israeli government’s policies and the interests of Jews worldwide.  Not only are the two not equivalent; the specific policies of the Israeli government have made the two contradictory in some respects.  And this is true not only about the ability of non-Israeli Jews to pray at a holy site in accordance with their own customs or to be recognized as a Jew when in Israel.  Netanyahu's posture toward attacks by the right-wing government of Hungary against the Jewish, Hungarian-born, American financier George Soros provides another illustration of Netanyahu’s priorities.  Netanyahu overturned an earlier Israeli foreign ministry statement that had condemned the attacks as contributing to anti-Semitism in Hungary, preferring instead to reaffirm his own government’s attacks on Soros because of the financier’s support for organizations critical of Israel’s occupation of the West Bank and of its government’s discrimination against non-Jewish citizens.

The implications of this divide include not only the one for Jews that their interests are not to be equated with the policies of Israel, but also the one for non-Jews that respect for Jews and Judaism does not require deference to those policies.

The other major dimension highlighted by the recent religious controversies in Israel concerns the basis and rationale for U.S. policy toward Israel.  Much has been said through the past seven decades about shared values between the United States and Israel.  The emphasis on values in constructing rationales for the unqualified U.S. support for Israel has become all the more necessary to the extent that non-value-laden ways of looking at U.S. interests involved—in terms of U.S. standing in the Muslim world, factors affecting instability in the Middle East, and motivations for anti-U.S. terrorism—make the unqualified support less defensible.

There were in fact some common values associated with the creation of the State of Israel.  The commonality has lessened over time, especially with regard to fundamental values involving political and human rights, and especially in the half-century of occupation of Palestinian territory, which now constitutes more than two-thirds of Israel’s history.  The subjugation of an entire nationality denied meaningful political rights, by a dominant population defined in terms of religion and ethnicity, is vastly at odds with American values.  The United States has its own checkered history with such matters, of course, with the slavery of African-Americans and dispossession of Native Americans being among the biggest departures from what most Americans today would consider their political and social values.  But even taking the least favorable view of the American story—and saying that it wasn’t until the civil rights advances of the 1960s, the same decade in which the Israeli occupation of the West Bank began, that those American values began to be realized—there is no comparison between modern American values and the Israel of today.

The recent issues about conversions and prayer space underscore that there is a wide difference in values regarding religion as well.  There always was going to be a substantial difference, with the American values from the beginning of the republic being based on the absence of an established religion and on law that would, in the words of Thomas Jefferson, “comprehend, within the mantle of its protection, the Jew and the Gentile, the Christian and Mahomedan, the Hindoo, and Infidel of every denomination.”

The gulf between this concept and idea of a Jewish state was not especially salient during Israel’s early years, given the largely secular and Western orientation of some of Israel’s founders and the political tone they set.  But as with political values, this, too, has changed over time.  Israel’s principal founding father, David Ben-Gurion, who described himself as irreligious, created the system in which ultra-Orthodox were exempted from military service and could devote themselves to full-time study of the Torah—a measure taken to obtain ultra-Orthodox support for creation of the state apparatus and justified to save a tradition of religious study that the Holocaust had almost wiped out.  Ben-Gurion probably did not foresee how, thanks largely to differential birth rates, the ultra-Orthodox would acquire the greater political power they have today, with wide influence on life within Israel and even beyond.

The status of Israel as a post-Holocaust haven for Jews does not erase the significance of the gulf in values.  Being a haven does not require being a theocracy, much less one with an increasingly narrow view of those worthy of receiving protection in the haven.  Part of the background to the increasing ambivalence about Israel among American Jews (not to mention European ones) that commentators lament is that, notwithstanding undeniable anti-Semitism, most of them feel relatively safe as well as integrated where they are right now.  Net migration into Israel has been dropping over the past decade and was close to zero by 2015.

The Trump administration has indicated at times that it does not intend to be guided much by values in constructing its foreign policy.  And yet the president, in his speech in Warsaw, talked about Western values.  Applying this concept to the religious situation in Israel, a fair observation is that this situation exhibits Middle Eastern values at least as much as Western values.  The segregation of the sexes that is at the center of the controversy over prayer at the Western Wall resembles not what one sees in the overwhelming majority of houses of worship in the West but rather what prevails in those parts of the Middle East dominated by fundamentalist versions of Islam.