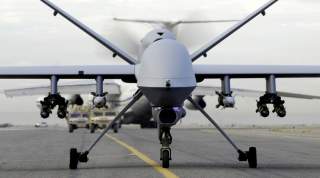 President Obama's announcement last month that earlier this year a “U.S. counterterrorism operation” had killed two hostages, including an American citizen, has become a fresh occasion for questioning the rationales for continuing attacks from unmanned aerial vehicles aimed at presumed, suspected, or even confirmed terrorists. This questioning is desirable, although not mainly for hostage-related reasons connected to this incident. Sometimes an incident has a sufficient element of controversy to stoke debate even though what most needs to be debated is not an issue specific to the incident itself. More fundamental issues about the entire drone program need more attention than they are getting.

The plight of hostages held by terrorists has a long and sometimes tragic history, almost all of which has had nothing to do with drones. Hostage-taking has been an attractive terrorist tool for so long partly because of the inherent advantages that the hostage-holders always will have over counterterrorist forces. Those advantages include not only the ability to conceal the location of hostages—evidently a successful concealment in the case of the hostages mentioned in the president's announcement—but also the ability of terrorists to kill the hostages themselves and to do so quickly enough to make any rescue operation extraordinarily difficult. Even states highly skilled at such operations, most notably Israel, have for this reason suffered failed rescue attempts.

It is not obvious what the net effect of operations with armed drones is likely to be on the fate of other current or future hostages. The incident in Pakistan demonstrates one of the direct negative possibilities. Possibly an offsetting consideration is that fearing aerial attack and being kept on the run may make, for some terrorists, the taking of hostages less attractive and the management of their custody more difficult. But a hostage known to be in the same location as a terrorist may have the attraction to the latter of serving as a human shield.

The drone program overall has had both pluses and minuses, as anyone who is either a confirmed supporter or opponent of the program should admit. There is no question that a significant number of certified bad guys have been removed as a direct and immediate consequence of the attacks. But offsetting, and probably more than offsetting, that result are the anger and resentment from collateral casualties and damage and the stimulus to radicalization that the anger and resentment provide. There is a good chance that the aerial strikes have created more new terrorists bent on exacting revenge on the United States than the number of old terrorists the strikes have killed.

This possibility is all the more disturbing in light of what appears to be a significant discrepancy between the official U.S. posture regarding collateral casualties and the picture that comes from nonofficial sources of reporting and expertise. The public is at a disadvantage in trying to judge this subject and to assess who is right and who is wrong, but what has been pointed out by respected specialists such as Micah Zenko is enough to raise serious doubt about official versions both of the efforts made to avoid casualties among innocents and of how many innocents have become victims of the strikes.

The geographic areas in which the drone strikes are most feasible and most common are not necessarily the same places from which future terrorist attacks against the United States are most likely to originate. The core Al-Qaeda group, which has been the primary target and concern in northwest Pakistan, is but a shadow of its former self and not the threat it once was. Defenders of the drone strikes are entitled to claim that this development is in large part due to the strikes. But that leaves the question: why keep doing it now?

The principal explanation, as recognized in the relevant government circles, for the drone program has been that it is the only way to reach terrorists who cannot be reached by other tools or methods. It has been seen as the only counterterrorist game that could be played in some places. That still leaves more fundamental questions about the motivations for playing the game.

Policy-makers do not use a counterterrorist tool just because the tool is nifty—although that may be a contributing factor regarding the drones—but rather because they feel obligated to use every available tool to strike at terrorists as long as there are any terrorists against whom to strike. In the back of their minds is the thought of the next Big One, or maybe even a not so big terrorist attack on U.S. soil, occurring on their watch after not having done everything they could to prevent it, or doing what would later be seen in hindsight as having had the chance to prevent it.

The principal driver of such thoughts is the American public's zero tolerance attitude toward terrorism, in which every terrorist attack is seen as a preventable tragedy that should have been prevented, without fully factoring in the costs and risks of prevention or of attempted prevention. Presidents and the people who work for them will continue to fire missiles from drones and to do some other risky, costly, or even counterproductive things in the cause of counterterrorism because of the prospect of getting politically pilloried for not being seen to make the maximum effort on behalf of that cause.