Why the Iraq War Really Was Different From the Vietnam War 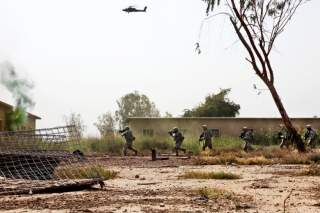 The Iraq War, as Heather Marie Stur tells us, should not be lumped together with the Vietnam War as blindly and repeatedly as many seem wont to do. Although the two military expeditions both rank among the costliest blunders in American history, there are indeed many differences between the two. Stur is correct to emphasize differences over similarities, but she completely misses the most significant differences—significant partly because of their implications for avoiding similar blunders in the future.

Difference number one sets the invasion of Iraq in 2003 apart not only from the intervention in Vietnam but from almost every other substantial use of U.S. military force. There was no policy process leading to the decision to launch the war. Whether invading Iraq was a good idea was never on the agenda of any meeting of policymakers, and never the subject of any options paper. Thus no part of the national security bureaucracy had any opportunity to weigh in on that decision (as distinct from being called on to help sell that decision to the public). Sources of relevant expertise both inside and outside the government were pointedly shunned. The absence of a policy process leading to the decision to launch the war is the single most extraordinary aspect of the war.

The U.S. intervention in Vietnam was entirely different. Although as the war went on the decision-making of Lyndon Johnson and his Tuesday lunch group became increasingly closed, the original decisions in 1964 and 1965 to initiate the U.S. air and ground wars in Vietnam were the result of an extensive policy process. The bureaucracy was fully engaged, and the policy alternatives exhaustively discussed and examined. However mistaken the decisions may have turned out to be, they could not be attributed to any short-cuts in the decision-making process.

A second distinctive aspect of the Iraq War is that it was a war of aggression. It was the first major offensive war that the United States had initiated in over a century. Every overseas use of U.S. military force in the twentieth century was either a minor expedition such as ones in the Caribbean or, in the case of major wars, a response to the use of force by someone else. The U.S. intervention in Southeast Asia was a case of the latter: a direct response to the use by North Vietnam of armed insurgency to take over South Vietnam.

This is another respect that sets the Iraq War apart not only from Vietnam but from many other U.S. wars, including a couple of relatively recent ones that Stur incorrectly likens to the Iraq War. Operation Enduring Freedom in Afghanistan in 2001 was a direct response to a terrorist attack by a group that was resident in Afghanistan and allied with its regime. Operation Desert Storm in 1991 was a direct response to blatant aggression by Iraq in invading and swallowing Kuwait. When that aggression was reversed by expelling the Iraqis from Kuwait, the U.S. mission really was accomplished.

Sometimes earlier wars have a lot to do with explaining much later events—and the centenary of World War I has stimulated some interesting analysis of how that war set in train events that still bedevil us today—but Stur's attempt to say something similar about the war in 1991 is mistaken. Some neoconservatives grumbled about Saddam Hussein being left in power, but the grumbling did not have to do with any problems created by Operation Desert Storm; it instead reflected the neocons' desire for other reasons to have a larger regime-changing war in Iraq.

This gets us to a third major difference, which is related to the first one. The Iraq War of 2003 was the project of a small,willful band of war-seekers—what Lawrence Wilkerson has called a “cabal”—who managed to get a weak and inexperienced president to go along with their project for his own political and psychological reasons. An assiduous selling campaign lasting more than a year, which exploited the post-9/11 political mood by conjuring up chimerical alliances with terrorists, mustered enough national support to launch the war. But the base for starting the project was always quite narrow.

By contrast, the United States sucked itself into the Vietnam quagmire on the basis of a very broadly held conventional wisdom about a global advance of monolithic communism, falling dominoes, and the need to uphold U.S. credibility. At the time of the intervention, opposition to the intervention was exceedingly narrow. The Gulf of Tonkin resolution authorizing the use of military force in Vietnam passed against only the lonely nay votes of Wayne Morse and Ernest Gruening in the Senate and no opposition at all in the House. The conventional wisdom pervaded the public and the media, including prominent journalists such as David Halberstam and Neil Sheehan who only later would become identified with publicizing the war's faults and fallacies.

Looking back on the mistakes involved in Vietnam War became a national exercise in painful retrospection. It included soul-searching by some of those most directly involved in launching the U.S. expedition; some of the most candid and insightful came from former secretary of defense Robert McNamara. The difference with the post-war posture of the people who brought us the Iraq War has been stark. Despite the much narrower original responsibility for that war, mea culpas from those who promoted it have been hard to find. The promoters have instead tried to find creative ways to blame the damage they caused on those who later had to clean it up.

All of this has implications for avoiding comparable blunders in the future. The Cold War is over, and the parts of the Vietnam-era conventional wisdom involving the nature of international communism are gone as well. We still see similar thought patterns, however, applied in other ways, especially with notions of upholding credibility and domino-like scenarios of geographically expanding threats. There still is Cold War-type thinking that treats Russia as if it were the Soviet Union, and that treats radical Islam as if it were a monolithic foe that is our enemy in a new world war.

Avoiding another blunder like the Iraq War means being wary not only of these sorts of thought patterns but also of a more direct hazard. The neocons who brought us that war are not only unrepentant but also very much around and still selling their wares. We most need to remember what they sold as the last time, and not to buy anything from them again.