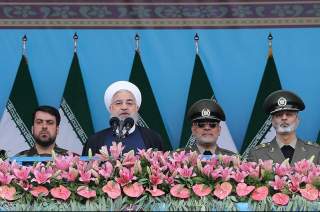 This week the Board of Governors of the International Atomic Energy Agency (IAEA) convened at the request of the Trump administration to discuss Iran’s nuclear activities. There is no action that, according to the IAEA’s charter and terms of reference, can or should come out of this discussion. The IAEA’s board is not the forum to discuss compliance with the Joint Comprehensive Plan of Action (JCPOA), also known as the Iran nuclear deal. That is the role of a joint commission established by the JCPOA, but the United States has not been a part of that body ever since the administration reneged on U.S. obligations under the JCPOA and decided it didn’t want anything to do with the agreement. The IAEA board would be the proper forum to discuss any problems regarding Iran living up to its commitments to the agency on nuclear safeguards, including providing international inspectors with agreed access. But there are no such problems; all indications are that Iran is in full compliance with its commitments regarding international inspections and monitoring of its program.

The administration went to the IAEA board because it wants to be seen doing something about an Iranian nuclear issue the administration itself has stirred up, and it has no better ideas on what to do. It is flailing in trying to get out of a box of its own making, and it sees no way to get out—other than the way it refuses to admit, which would be to reverse its own action that built the box in the first place. Everything else that has ensued in what has become perceived as a nuclear crisis with Iran is clearly, wholly, directly, and unsurprisingly the result of the Trump administration reneging on U.S. obligations under the JCPOA. Before that action—and even for a year after that action—Iran was fully complying, as IAEA inspectors have certified, with the agreement’s strict limitations on its nuclear program.

The flailing was reflected in President Donald Trump’s tweet about Iran on the day of the IAEA meeting in which he promised, “Sanctions will soon be increased, substantially!” Even if more sanctions were somehow to provide a way out of the mess—rather than, as all experience strongly suggests, leading Iran to ramp up its own counterpressure—the administration already has been pressing on this front so long and so hard that there is hardly anything left in the Iranian economy to sanction. The tweet also contains some of the usual falsehoods about the JCPOA—that Iran is “secretly” enriching uranium, that the “150 billion dollar deal” will “expire in a short number of years,” and so forth. All that responsible observers and organizations can do is patiently to point out the falsehoods and to restate the truth about the agreement.

It’s not just Trump’s tweets that hinge on throwing anything up on a wall and seeing what sticks. The White House press secretary issued a statement last week that declared, “We must restore the longstanding nonproliferation standard of no enrichment for Iran.” There is no such standard. The tight limitations that the JCPOA placed on Iran’s enrichment of uranium are unique to that agreement and Iran and are more restrictive than any international standard. But that wasn’t even the most absurd sentence in the White House’s statement. Instead it was this line: “There is little doubt that even before the deal’s existence, Iran was violating its terms.”

If there is any strategy in play here, then it evidently is to repeat such nonsense enough times to cause people to lose sight of the fact that it was the United States, not Iran, that violated the JCPOA. As the agreement itself makes explicit in paragraphs twenty-six and thirty-six, failure of one party to live up to the agreed terms is sufficient grounds for other parties to consider themselves released from their own obligations under the deal.

The Trump administration’s most recent exclamations about Iran creeping above some of the JCPOA limits underscore how useful and important the JCPOA’s provisions have been. This is true of the comprehensive and intrusive monitoring by the IAEA, which may be the single most valuable feature of the agreement and is a provision that never expires. Because of this monitoring arrangement, no one has had to trust what the Iranians have said about what they are doing in the way of uranium enrichment; the international inspectors have been able to confirm it within a day.

It is self-contradictory, of course, for an administration that has spared no effort in berating the JCPOA and its terms to start expressing great concern about Iran no longer conforming completely with those same terms. Evidently the limits the JCPOA established are useful and important after all, despite what the administration had long been trying to get people to believe.

There is every indication that Iran’s small, incremental, publicly announced, and very reversible exceeding of enrichment limits is designed as counterpressure aimed at restoring complete compliance with the JCPOA. There is no indication that it reflects any reversal of Iran’s prior strategic decision to seek participation in the community of nations as an unsanctioned, non-nuclear-weapons state. In any event, thanks to the terms of the JCPOA, even the recent exceeding of enrichment limits need not raise any alarms about an Iranian nuclear weapon being imminent. Iran is nowhere close to being able to construct such a weapon even if it chose today to do so, and that is because of how far the JCPOA shoved such a weapon out of reach. “Inching” over a three-hundred-kilogram limit for low enriched uranium is trivial compared to the far larger stockpile of the stuff Iran had when the JCPOA was negotiated, 98 percent of which Iran had to get rid of as a condition for getting any sanctions relief. And that was only one of the several comparably major steps Iran was required to take under the agreement to close all possible pathways to a nuclear weapon.

Trump can still get out of the mess he created if he admits, even if only to himself, that accepting something very close to the JCPOA is the only way out. Otherwise expect nothing good to come out of an administration posture that is based on a desire to destroy whatever Trump’s predecessor did, a subcontracting of the administration’s Middle East policies to regional rivals of Iran who have their own reasons to keep it permanently ostracized, and an obsession about Iran that is blatantly inconsistent with the standards the administration applies to other foreign-policy problems.