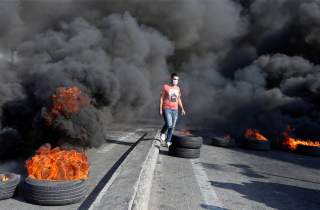 Recent disturbances in Arab countries have not yet become as far-reaching as what ensued after a Tunisian fruit vendor immolated himself in protest nine years ago, but observers are already talking about an Arab Spring 2.0. Extensive unrest has materialized in the streets of Iraq and Lebanon, along with less salient protests in Algeria, Sudan, and elsewhere. Two striking aspects of the current protests stand out and are relevant to Western policies toward the region.

One is that the sources of discontent are primarily old, familiar ones that also underlay the first Arab Spring. They involve the basic human desire for a better life. Simply put, the target of the discontent is the inability of existing political systems to deliver services and economic opportunity in a fair, uncorrupt, and effective way.

This source of unhappiness is shared by many people from different communities and with different political affinities. The unrest is not defined mainly in terms of specific ideologies or even religious and ethnic identities. Arab journalist Mina Al-Oraibi has observed that some of the unrest in Iraq “highlights how Shiite-majority provinces haven’t benefited from political parties using ‘Shiite identity’ to gain and retain power.” Understanding of the roots of the unrest is to be found not in any party’s manifesto but instead in the social and economic shortcomings analyzed in the series of United Nations-sponsored studies, the first of which was published in 2002 and issued under the name of the Arab Human Development Report.

The other major attribute of Arab Spring 2.0 is that it differs from common U.S. perceptions of troubles in the Middle East. One dominant theme in those perceptions, promoted by the neoconservatives whose control of policy in the George W. Bush administration culminated in the Iraq War, has been democracy and the concept of Middle Easterners yearning to be free of authoritarian rulers. Many Iraqis surely were happy to be free of such a rule, but in the short-term, any gratitude for assistance in shedding such a yoke was outweighed by resentment over foreign occupation—a sentiment that has influenced Iraqi policies ever since. The U.S. occupiers were met less with flowers and sweets than with insurgency.

Over the longer term, the inability of the U.S.-shaped Iraqi government to deliver corruption-free services and opportunities has dominated popular sentiment and underlies the current unrest.  There are some parallels with post–Soviet Russia, where any early happiness about shedding the Soviet system became overshadowed by unhappiness over corruption and inadequate public services, leading some to mourn the passing of that system.

More recently, the dominant U.S. tendency has been to look at Middle Eastern countries as squares on a chessboard on which the United States competes for influence with rival powers from outside the region, especially Russia, or inside it, especially Iran. The latter rival, along with the notion of an Iran-controlled “Shia crescent,” especially serves as the present U.S. administration’s all-purpose explanation for any trouble in the Middle East. But Middle Easterners do not think of themselves as squares on someone else’s chessboard, and the current disturbances show that they don’t.

The unrest in Lebanon is less a confrontation of one confessional community against another or one sectarian-identified group against another than it is a widespread rejection of the entire system of confessional politics. That system has rested on confessional-based patronage that has made for a rigid and unresponsive polity and ineffectiveness in meeting many needs of Lebanese and Lebanon as a whole.

Something similar is occurring in Iraq. Protestors’ chants have included anti-Iran slogans, but that does not reflect any desire for a new Iraqi-Iranian confrontation. Instead, it reflects how Iran is the foreign entity that has become most visibly associated with a disdained domestic status quo. As Alissa Rubin describes the situation in the New York Times, “It is a struggle, above all, between those who have profited handsomely since the American invasion toppled Saddam Hussein and those who are struggling to get by and look on with fury as the political parties, some with ties to Iran, distribute payoffs to the well connected.” Iran is not getting many flowers and sweets these days, regardless of Iraqi gratitude for what it did to help defeat the Islamic State in Iraq.

A couple of policy implications for the United States follow. First, if the objective is to make Middle Eastern countries more peaceful and stable, then pay attention to the human development needs of its people. Forget the chessboard.

Second, if you want to have more of a presence in these countries than rivals such as Russia or Iran do, then be careful what you wish for. Anti-occupation sentiment will be strong, even to the point of trumping dissatisfaction over the inability of local authorities to meet human needs.  That is why the new Arab Spring has not spread to Palestine, despite the ineffectiveness of the Palestine Authority. Palestinians realize that the biggest and most oppressive fact in their lives is the Israeli occupation, and most Palestinians save most of their anger for that target.

Beyond resentment of anything perceived as foreign occupation, an ineffective and despised domestic economic and political power structure causes resentment against any foreign power that, for whatever reason, comes to be associated with that structure. Iran’s position in Iraq illustrates that point vividly, and not just because of Tehran’s own missteps. Despite all the alarm expressed in American rhetoric about Iranian influence in places such as Iraq, that influence—beyond securing Tehran’s basic security objective of preventing another Iraqi dictator from launching an invasion of Iran, like Saddam Hussein did in 1980—has not bought Iran much beyond a lot of unfriendly slogans chanted by unhappy Iraqis.