Work with the Russians on Syria 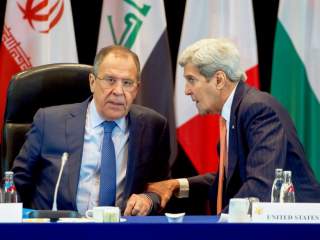 There is no shortage of certitude in American commentary about what Russia is trying to do in Syria. For example, the Washington Post editorial page, unrelentingly hawkish on everything involving Syria, declares that “it has long been obvious to almost everyone that the regime of Vladimir Putin is seeking a military victory over Western-backed rebels, not a truce.” Right after that editorial appeared, Moscow made a fresh proposal, currently the subject of international talks, for a cease-fire to begin in less than three weeks. Also abundant in the commentary is the presumption that to oppose everything Russia is doing in Syria is the right thing to do, and anything that involves cooperation with the Russians there is a mistake. Dennis Ross of the Washington Institute for Near East Policy laments that “rather than being opposed to the Russian efforts, we look to be in league with them.”

Much of this commentary is straight out of the early and middle years of the Cold War, when events in the Middle East were assessed in large part in terms of which of the two superpowers was gaining influence in a particular capital by winning the friendship of the local strongman or through a coup that installed some new strongman. The Cold War scorecard for the region was kept in terms of how many security agreements and arms deals there were with the United States and the USSR respectively. Old habits evidently die hard, even though the Cold War is over. Much of the current discourse about Russia in the Middle East and specifically Syria portrays issues as even more zero-sum than they were during the Cold War, and certainly more than they are now. For example, James Jeffrey, also of the Washington Institute, explicitly places discussion of Syria in the context of U.S.-Soviet competition in the Middle East during the Cold War, talks of the region as a “U.S. security zone,” bemoans how Russia “seems to be moving from victory to victory in Syria,” asks “if Putin can get away with such activities in Syria, where might he act next,” and asserts that what is happening in Syria has “potentially serious implications for the entire U.S. global security system.”

Putin undoubtedly had a variety of reasons (some of which Ross correctly identifies) for intervening militarily in Syria. But more important than parsing motivations the Russian leader may have had as of last year is to consider current realities that both Russia and the United States are facing in Syria today. The following realities are especially important in formulating an effective policy toward Syria and toward the Russian role there.

First, this is not the Cold War, and not everything is zero-sum. Some Russian objectives conflict with U.S. objectives but others are neutral with respect to U.S. interests and still others are congruent with those interests.

Second, a purely military outcome is currently as much out of reach in the Syrian civil war as it ever has been, notwithstanding the Russian-backed regime advances near Aleppo that have received much attention over the past couple of weeks. Propping up the Assad regime certainly has been one of the Russian objectives, but propping up the regime is not the same as leaving the regime in such a commanding position that it would not need indefinite and costly Russian help to keep standing up, let alone to recapture all of the Syrian territory it has lost in the course of the war. Besting opposition forces at Aleppo or elsewhere does not mean the armed opposition is going to sulk away. And even if the “moderate” opposition could somehow be wiped out, then the regime and its backers would still be squarely facing the extremists and especially ISIS. Putin surely is perceptive enough to realize all this, notwithstanding what the Post editorialists assert is his objective. Russia still has a strong interest in a negotiated settlement in Syria.

Third, the chief recent impediment to negotiations to reach such a settlement has been erected by opposition elements, who have balked at negotiating unless their demands for preconditions are met, including in particular cessation of the regime's military operations. Insistence on such demands precludes negotiations. If we were to make a habit out of insisting on prior cease-fires before sitting down to talk, we would still be fighting the Korean War.

The Russian-backed regime offensive around Aleppo should be viewed in these terms. If you want a Cold War-era comparison, think about the Christmas bombing: the devastating escalation of the U.S. air war against North Vietnam in late 1972. If that offensive were interpreted at the time the way many commentators are interpreting the fighting at Aleppo today, the interpretation would be that the Nixon administration was seeking a military victory and was not genuinely interested in a negotiated settlement. And that interpretation would have been wrong; the bombing was instead a way of changing the incentives of an opponent who had been balking at finalizing a settlement.

Fourth, the interests of Assad and his regime are not the same as Russian interests. The regime may not have an interest in negotiating its own demise, but Russia does not have an interest in indefinitely expending resources to prevent that demise. With this in mind, a sound strategy is outlined by Samuel Charap and Jeremy Shapiro, who argue that the chances for a peace settlement are enhanced by getting the United States and Russia on the same page, which will be a different page from the one Assad can be expected to be on. Charap and Shapiro write, “The United States should refocus the next round of talks on creating a unity government that Russia will accept, the first task of which would be to arrange a general cease-fire and an end to the violence. The details of the deal are of secondary importance, because Assad will reject it. Russia will then lose its patience with the regime. At that point, the United States and Russia would have a chance at finding a common position on ending the war.”

It does neither Syrians nor anyone else any good to respond to the Russian intervention by getting into a Cold War-style dither and pretending that U.S. interests are the opposite of whatever Russia is doing. Increased Russian leverage from the intervention, especially over the Assad regime, can itself be leveraged by the United States to advance its own interests.

Those interests have much more to do with tamping down the conflict than with shaping a particular political future for Damascus. A specific timetable for Assad's departure matters little to U.S. interests. What matters more is curbing the warfare that already has given ISIS a big opportunity for growth, that continues to breed extremism, and that risks destabilizing effects in nearby parts of the region. This is a page that both Washington and Moscow can be on.