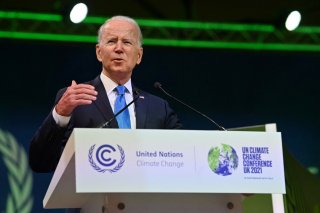 On Wednesday, President Joe Biden announced that he will be implementing several executive actions that focus on combating climate change.

As reported by ABC News, while the president didn’t declare a national climate emergency, which climate activists have been calling for, he suggested that he hasn’t ruled out the possibility of doing so.

“Now let me be clear, climate change is an emergency and in the coming weeks, I’m going to use the power I have as president to turn these words into formal, official government actions through the appropriate proclamations, executive orders and regulatory power that the president possesses,” Biden said. “When it comes to fighting climate change I will not take no for an answer,” he added.

According to the White House, the executive actions focus on protecting communities from extreme heat and dangerous climate impacts, lowering cooling costs, and expanding offshore wind opportunities and jobs.

The release added that “the Department of the Interior is proposing the first Wind Energy Areas in the Gulf of Mexico, a historic step toward expanding offshore wind opportunities to another region of the United States. These areas cover 700,000 acres and have the potential to power over three million homes.”

The executive actions come as more than 85 percent of Americans are bracing for temperatures above 90 degrees Fahrenheit through the weekend, with millions in the south-central region of the country expected to experience readings in the triple digits, according to a CNN report. More than a hundred million people are under heat alerts in more than two dozen states from parts of the American West to New England.