‘Defund the FBI’ is a Gift to Democrats and China 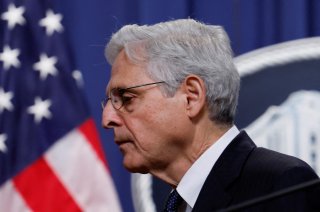 Words and narratives mean a great deal in politics. History is littered with politicians and movements that rose or fell by a word, a phrase, or even worse, a slogan found crazy or extreme by voters.

Both “defund the police” and “defund the FBI” go a long way to explaining why over a quarter of respondents (27 percent) to an August 9th Gallup poll say they view both the Republican and Democratic parties unfavorably. That's way up from a mere 6 percent who disliked both parties in 1994, much higher than the 18 percent recorded in 2018. The rhetoric and tone used by some high-profile Republicans are increasingly hurting all GOP candidates in primaries and general elections when they face a wider electorate. If Republicans can be more careful to avoid blunders like “defund the FBI,” they have a real opportunity to convert the 41 percent of America that sees themselves as independents to vote for Republicans in primaries and general elections in both 2022 and 2024.

The goal should be to build a GOP brand that broadens the base and delivers a governing mandate and agenda that will attract conservatives, like-minded independents, and maybe even some discerning Democrats.

Let’s not carelessly hand the Democrats the ammunition to offset their own “defund the police” folly, which cost them millions of votes in 2020. The party that effectively appeals to the silent middle with sharp arguments that don’t cross the line coupled with an agenda focused on economic, financial, and national security will end up winning elections.

Furthermore, in our digital world, politicians should mind their words because they ricochet across the world and can over time weaken American prestige, power, and security. Words are the currency of power in both elections and diplomacy. They also amplify the Chinese belief that America is sharply distracted and divided at home and that the American reputation for freedom and stability is in decline as well.

There is another more critical reason why the Chinese welcome the “defund the FBI” slogan: the FBI’s expanding efforts to combat Chinese economic espionage.

Senior U.S. law enforcement and intelligence officials believe that Chinese espionage is a significant long-term strategic threat, encompassing both spy craft intended to steal government secrets and the sustained theft of intellectual property and research from the corporate and academic worlds.

Justice Department officials have publicly stated that more than 90 percent of economic-espionage prosecutions over the past decade have been related to China. More generally, some assert that theft of intellectual property by the Chinese is worth more than $500 billion a year.

Wray said in a speech at the Department of Justice’s China Initiative Conference in February 2020 that China was seeking to steal U.S. technology by “any means necessary” and the law enforcement agency has about 1,000 investigations open into Chinese technology theft across its fifty-six regional offices. Senior U.S. counter-intelligence official William Evanina told the same conference that China was placing priority on stealing U.S. aircraft and electric vehicle technology.

In 2014 and then again in 2017, the Communist Party of China declared that all Chinese companies must collaborate in gathering intelligence. “Any organization or citizen,” reads Article 7 of China’s National Intelligence Law, “shall support, assist with, and collaborate with the state intelligence work in accordance with the law, and keep the secrets of the national intelligence work known to the public.”

Chinese cyber theft is responsible for what General Keith Alexander, the former director of the National Security Agency, described as the “greatest transfer of wealth in history.”

China’s goal is to gain power by merging civilian and military efforts. The source of China’s fusion doctrine can be traced back to Mao Zedong who saw little distinction between wartime and peacetime. In 1999, it was declared a strategic concept with particular relevance in the age of globalization and the Internet and later the fusion doctrine was formalized as a national policy and competitive strategy.

After decades of complacency, Washington has finally woken up to the fact that China is a determined peer rival right across the board. The FBI is playing a key role in protecting our security just like a cop on the beat.

Reform to improve performance is always welcome but both the FBI and our police deserve the respect and full support of all Americans. These institutions should symbolize our common purpose to protect America’s economic and national security as well as our safety as we all go about everyday life.

Carl Delfeld is a senior fellow at the Hay Seward Center for Economic Security, was a former U.S. Representative to the Asian Development Bank, and is the publisher of the Independent Republican. His latest book is Power Rivals: America and China’s Superpower Struggle.