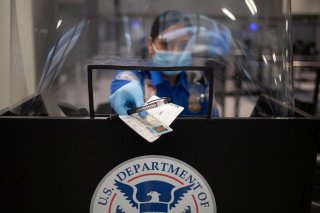 The Transportation Security Administration has announced that it will now give $1,000 hiring bonuses in an effort to employ six thousand additional screeners by October.

The agency has hired roughly four thousand workers so far, but some airports are still beset by long security lines that have forced many passengers to arrive there an hour or two earlier than usual, according to its latest estimates.

Many airlines have already received funds from the $54 billion in federal payroll aid, which helps them to keep their current employees while scrambling to hire workers.

Recently, American Airlines had to cut its schedule by one percent because of staffing shortages.

“Our focus this summer—and always—is on delivering for our customers no matter the circumstance,” American Airlines spokeswoman Shannon Gilson said in a press statement.

“We never want to disappoint and feel these schedule adjustments will help ensure we can take good care of our customers and team members and minimize surprises at the airport,” she added.

In addition, the workforce shortage at Dallas/Fort Worth International Airport has gotten to a point where a top executive has told restaurants and stores not to poach each other’s workers.

“As you know, we are experiencing one of the greatest hiring challenges in the history of DFW Airport,” Ken Buchanan, executive vice president of revenue management and customer experience, wrote in a letter last month.

“As we prepare for a busy summer, please continue to practice DFW Airport’s high standards of hiring operations and refrain from soliciting employees from other DFW operations,” he added.

Other companies are also relying on cash bonuses or even giving away free iPhones to attract new hires. One McDonald’s franchise in Altamont, Illinois, had this in mind when it came up with a plan to entice new workers by saying that it will offer the popular phone after six months of employment.

The fast-food company also recently said that it would raise hourly wages by an average of 10 percent for more than thirty-six thousand employees at its restaurants. “These increases, which have already begun, will be rolled out over the next several months and include shifting the entry-level range for crew to at least $11-$17 an hour, and the starting range for shift managers to at least $15-$20 an hour based on restaurant location,” McDonald’s noted in a press release.

Moreover, some states like Arizona and New Hampshire are offering financial incentives as well to those who eventually accept a job.

For example, Arizona’s Back to Work program is giving a one-time $1,000 payment to unemployment benefit recipients who accept part-time work and $2,000 to full-timers. “In Arizona, we’re going to use federal money to encourage people to work instead of paying people not to work,” Gov. Doug Ducey recently told reporters.