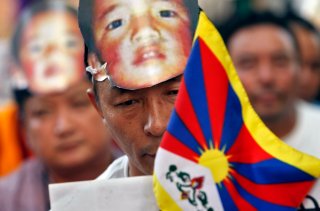 Twenty-six years ago to the day, on May 17, 1995, the Chinese government “disappeared” Gedhun Choekyi Nyima, the Dalai Lama’s choice of successor for the “Panchen Lama,” the second most important authority in Tibetan Buddhism. Both the Dalai Lama and Panchen Lama are “tulkus,” incarnate custodians of a specific lineage of teachings. Both their roles are intimately connected, and both participate in the process of recognizing each other's believed reincarnations.

From a poor Tibetan family in a remote village of Lhari county, Nyima was just six years old when he and his family were abducted by Chinese Communist Party (CCP) authorities, making him the world’s youngest political prisoner. The Chinese government claims Nyima and his family are alive but continues to refuse to release them or to allow them to meet with observers.

In order to appoint a preferred successor to the position after Nyima’s disappearance, CCP authorities forced another group of monks to identify a different child of the same age, Gyaltsen Norbu, as the official reincarnation. Norbu, himself “selected” by CCP authorities at five years old, lives under effective house arrest in Beijing, and is annually paraded in Tibet, accompanied by police, officials, and a massive publicity operation involving hundreds of staged worshippers.

Given that Reincarnated lamas are afforded the highest roles in Tibetan (and Mongolian) Buddhism, Chinese authorities are acutely aware of the inseparability of this authority with the politics of the region, hence their eagerness to “tame” it into conformity with “socialist traits.”

Ordinary Tibetan Buddhists have, unsurprisingly, refused to recognize Norbu as the true reincarnation, and commonly refer to him as “Gyami Panchen” (the “Chinese” Panchen) or “Panchen Zuma” (i.e. “fake Panchen”).

The fourteenth Dalai Lama Tenzin Gyatso, who resides with the Tibetan government-in-exile in Himachal Pradesh, India, will turn eighty-six this year and knows his days are numbered. Keenly aware of this march toward suppression of Tibetan autonomy, he has made various public statements that will make it almost impossible for a Chinese-state appointed successor to be seen as legitimate by Tibetan communities, by for example suggesting that his successor may be born abroad, mostly likely in India, or even that they may be a woman.

It has long been clear that, as the Dalai Lama has suggested, Chinese authorities are gearing up for a full coup of the Tibetan Buddhist hierarchy. Indeed in August 2007, China's State Administration for Religious Affairs issued a decree that all the reincarnations of tulkus of Tibetan Buddhism must be subject to government approval, or risk being designated as "illegal or invalid.”

In light of this year’s anniversary, the U.S. Commission on International Religious Freedom reiterated the over two-decades-long call on the Chinese government to reveal the Nyima family’s whereabouts. International concern has generally dwindled, however. On the landmark twenty-fifth anniversary of the disappearance last year, a paltry fifteen Swiss, four Italian parliamentarians, along with sixteen Czech MPs and sixteen Czech Senators signed four requests for his release.

For international observers, the disappearance of Nyima and his family, and the ongoing encroachment on the liberties of Tibetan Buddhists is just another point on the ever-expanding list of the Chinese government’s egregious abuses on its own populations. Moreover, it is a deeply troubling reminder of the regime’s inability to stomach any genuine opposition, be it transcendental, political, or both.

While each year, human rights organizations will use the anniversary of his disappearance to highlight the crime of Nyima’s kidnap and his unknown whereabouts, the Chinese government remains under no obligation to heed their calls. Yet it is likely that when the incumbent Dalai Lama, a popular international figure, passes away, we are likely to see an uptick in global outcry when the CCP inevitably attempts to force in a Party-appointed successor. The question is, will the international community be willing and able to hold them accountable for this crime if or when it comes to pass?