Is $6 a Gallon Gas Heading to a Station Near You? 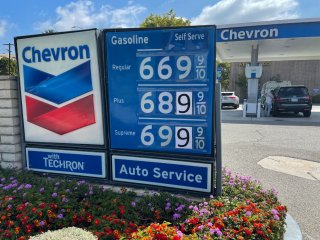 This past weekend, for the first time ever, a gallon of regular gas eclipsed $5 on average nationwide, according to AAA data.

Now, for many already-frustrated American drivers, the phrase “pain at the pump” is fast becoming a major understatement as $6 gas appears to be on the horizon.

“It’s been one kink after another this year, and worst of all, demand doesn’t seem to be responding to the surge in gas prices, meaning there is a high probability that prices could go even higher in the weeks ahead,” Patrick De Haan, head of petroleum analysis at GasBuddy, said in a statement.

“It’s a perfect storm of factors all aligning to create a rare environment of rapid price hikes. The situation could become even worse should there be any unexpected issues at the nation’s refineries or a major hurricane that impacts oil production or refineries this summer.”

Natasha Kaneva, head of JPMorgan’s global commodities strategy, recently predicted that the national average for regular unleaded will hit an eye-popping $6.20 per gallon by Labor Day. Similar calls have been made by other industry experts as well.

For example, Tom Kloza, global head of energy analysis for the OPIS, which tracks gas prices for AAA, told CNN Business that the national average for a gallon of gas could be near $6 later this summer as demand will likely stay elevated. “Come hell or high gas prices, people are going to take vacations,” he said.

De Haan contended that demand must be reduced before people see any sort of relief at the pump.

“There has got to be some point where people start cutting back, I just don't know what the magic point is,” he told the Associated Press.

According to a new ABC News/Ipsos poll, just 27 percent of voters say they approve of the Biden administration’s handling of gas prices. However, Fortune noted that President Joe Biden “has been trying” to tame the fast-rising costs as he has approved a record-setting release of 180 million barrels of oil from the Strategic Petroleum Reserve (SPR) in March and has been pressing oil producers to increase supply.

“I think the president gets wrongly blamed for most of the increase in gas prices,” De Haan told the news outlet. “Much of why we’re paying higher prices today has less to do with Biden and more to do with COVID, Russia, and other issues.”