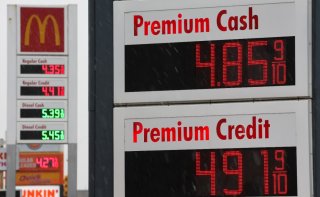 For the fifth straight week, the nation’s average gas price has continued to trek higher, rising 11 cents from a week ago to $4.57 per gallon on Monday, according to GasBuddy data. The national average is up a whopping 45 cents from a month ago—and $1.55 compared to a year ago.

According to the national spokesman for AAA, Andrew Gross, there likely won’t be any relief on the way anytime soon. In fact, drivers should expect elevated prices throughout the summer months—especially if the war in Ukraine continues on. “Demand is up,” Gross told Fox News. “Typically this time of year we are in a little bit of a lull. There is often a demand lull between spring break and Memorial Day and we had a little bit of it about two weeks ago, but then last week … there was actually an increase, which is very unusual. I don’t think I’ve ever seen that.”

He continued by noting that “you have this increased demand as well as these really elevated oil prices” and that “the price of oil has been stuck in this weird range of $100 a barrel to $110 a barrel.” Given this, “it meets resistance when it hits $110 and then it drops back down, but then it meets resistance to drop below $100 and so it’s in this uncomfortably high area,” Gross added.

Patrick De Haan, head of petroleum analysis at GasBuddy, is still holding out hope that the country will be able to avoid seeing a national average of $5 per gallon of gas this year. “Gasoline prices surged over the last week to new record highs, but have finally started to slow their rise with diesel also finally cooling off,” he said in a release. “With more Americans planning to hit the road for Memorial Day this year compared to last, prices will be over $1.50 per gallon higher than last year. Though, prices are appearing to slow down, for now. While the coast isn’t clear yet, and prices will be at their highest Memorial Day level ever, I’m hopeful that we could avoid a dreaded national average of $5 per gallon this year. Whether or not we’re able to depends on Americans cutting demand in the face of sky high prices,” he continued.

However, JPMorgan analysts have already warned that California’s state average of $6 per gallon gas could quickly spread across the country. “There is a real risk the price could reach $6+ a gallon by August,” Natasha Kaneva, head of global oil and commodities research at JPMorgan, told CNN Business in an email last week.

The bank also contended in a report that “with expectations of strong driving demand … US retail prices could surge another 37 percent by August.”