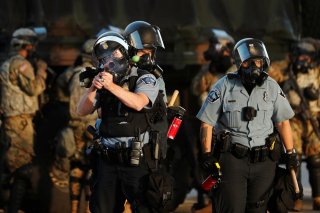 The American Civil Liberties Union has filed a lawsuit against the city of Minneapolis demanding a ban on arresting or firing on reporters.

Public outrage and civil unrest spread across the country last week after George Floyd, an African-American man, was killed during an arrest by a Minneapolis police officer who placed his boot on Floyd’s neck. Police have been criticized for using force against reporters amidst the chaos, including in several clashes during live news broadcasts.

The lawsuit, filed on Wednesday, demands a restraining order to protect people who have “identified themselves as a member of the news media” or are clearly “engaged in news gathering activities” from arrest.

It calls for a ban on using tear gas, rubber bullets, batons, or “threatening language or gestures to harass or intimidate” reporters.

“Our power to collectively demand racial justice and an end to police brutality is rooted in our First Amendment right to free speech and the press’s ability to bear witness,” ACLU attorney Brian Hauss wrote in a statement to supporters. “Police are using violence and threats against protesters and press to undermine that power. We cannot let that happen. So we’re suing—starting with Minnesota.”

The civil liberties organization filed the class-action lawsuit on behalf of Jared Goyette, a freelance journalist who claims he was shot in the face with a rubber bullet while filming an injured man.

Goyette alleges that an officer pointed his gun at him and Maggie Koerth, a reporter for FiveThirtyEight, in a separate incident.

The Minneapolis Police Department categorically denied using rubber bullets earlier this week after freelance journalist Linda Tirado was struck in the face by a projectile and blinded in one eye.

Goyette’s lawsuit claims that the Minneapolis Police Department has “a history of unconstitutional actions against journalists” and mentions several other reporters who were allegedly arrested, struck, or threatened by Minneapolis police during the recent unrest.

One of the reporters, CNN reporter Omar Jimenez, made nationwide headlines when Minnesota police arrested him and his camera crew while they were broadcasting live.

Minnesota governor Tim Walz later apologized for the incident, telling the news network that “we’re learning, have to change because we have to create the space for you to tell the story.”

Several other clashes between reporters and police occurred during live broadcasts.

Police guarding the White House caused an international incident when one of them struck members of an Australian news crew on air.

A local news crew in Louisville, Kentucky was struck with pepper balls in a video that has since gone viral: an officer pointed his gun directly at the camera while a reporter could be heard shouting, “I’m being shot!”

Police officers are not the only culprits of attacks against the press in recent days, however. Protesters launched fireworks into the CNN headquarters in Atlanta last Friday and beat a Fox News crew in front of the White House the next day.

“When journalists can’t do their job, law enforcement and other officials act with impunity—endangering everyone who advocates for change,” Hauss wrote.