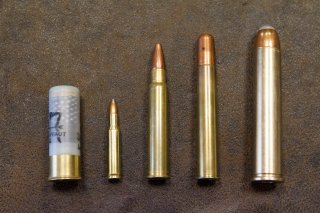 The ammunition shortage has been affecting hunters and gun enthusiasts around the country since early in 2020. And with deer season getting underway in many parts of the country, the shortage is especially causing a headache for many hunters.

Wisconsin’s eight-deer deer gun season got underway on November 20, and the shortage has left many hunters in the Badger State “feeling ill-equipped,” for the second year in a row, according to the Associated Press.

Randy and Tiffani Rogness, owners of Paddock Lake Sporting Goods in Salem, said they had empty store shelves as of last Friday—and when new supply arrives, it tends to only last two or three hours, despite customers being limited to one box each.

In addition, Minnesota-based Vista Outdoor says that it’s “ramping production ahead of schedule at its Remington facility to meet unprecedented demand.”

It was a similar story earlier in the month, when Seehafer News in Wisconsin’s Manitowoc County, spoke with Bruce Elliott, the owner of a business called Louie’s Sporting Goods.

“We can’t get the ammo, we can’t give it to our customers, our customers are getting upset over it, we are upset, we just can’t get ammo,” Elliott told Seehafer News. “If I could have a semi load of ammo out in the parking lot right now, I guarantee that I would have people coming from all over the state coming in to buy it.”

“I tell the guys, if there is some ammo out there and you find it, you better grab it,” he added. “If it’s not the brand you use or what it is, just take it and make do for now.”

“There’s nothing that we can do. We try to get as much in as we can obviously to sell it, but it’s the distributors that have a short supply and manufacturers do too,” Scott Virlee, owner of Virlee GunWorks, told WBAY in another report about the shortage in Wisconsin.

The ammunition shortage has been attributed to everything from the widespread increases in gun ownership during 2020 to pandemic supply chain constraints to consolidation among ammunition manufacturers to this year’s State Department sanctions on Russian ammunition, as in recent years Russia has been one of the top exporters of ammunition to the United States. It’s unclear when the shortage might ease until it’s not expected to happen until sometime in 2022.